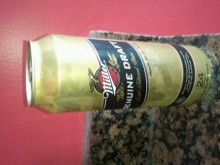 So, here we are.  After sixteen months, it is all on the line tonight.  So time to settle in with an oil can or three of some Union Made macrobrews from Wisconsin, and watch Ed Schultz get all Schultzy.

The early indications are that turnout is absolutely massive.  Hell, Dane County (home to dirty fucking hippies in Madison) reported a possible turnout of 119% at one point.  (This, of course, set all the voter fraud goons off.  Someone had to gently explain to them that same-day registration may actually make such a thing possible.  But, of course, gentle explanations are not terribly effective.)  The Dane County election overseers had to clarify the 119% number a bit, by saying it was simply a projection, and that absentee votes were goosing the projection models a bit, but still — this looks incredible from here.

IN THE BLUE CORNER, THE CHALLENGER, THE FIGHTING PRIDE OF MILWAUKEE, THE HONORABLE MAYOR OF CREAM CITY, TERRIFIC TOM BARRETT! (yea!) BARRETT!

IN THE RED CORNER, THE REIGNING, DEFENDING, SUPER-LIGHTWEIGHT CHAMPION OF THE RIGHT…. THE WAUWATOSA WANKER…. SCOTT WALKER (boo!) WALKER!

And, like any other good championship fight, there is an undercard.  Four State Senate seats on the line. As things stand, if there is one pick-off for Team Blue, the unified stranglehold on state government that GOPers now enjoy will be all gone.  Of note, Scott Fitzgerald — one of the orchestrators of the right-wing movement in the Legislature last winter — is in a surprisingly tough fight.

END_OF_DOCUMENT_TOKEN_TO_BE_REPLACED

Showdown At The O-Koch Corral

OK, you lovely cynics.  After a three-month absence (oh man, work has just been peachy in that time), I’m back.  And not a moment too soon, for we got ourselves some Wiscocentric denouement tonight.

The read at this early stage is that turnout has been positively massive.  But that could cut both ways.  The energy on both sides is probably at a fever pitch (whipped up no doubt by… excuse me…. 33 MILLION CLAMS shelled out for the nine recalls), so more than half of the turnout could be Wisconsinites angry at unions for, well, whatever foul they may have committed.  And “more than half” is the name of the game in elections, as you know.

So, the p0lls close — nominally — in 15 minutes.  (Polls can stay open so long as people are in line — a rule that approximately 7,000 lawyers know by heart and are poised to enforce to their hearts’ content.)  Then, the story shall unfold before you, old-school OPEN THREAD style.

(Note: picture above, right, is a scene from a Wisconsin hockey game.  Hockey is popular in Wisconsin, where winter is about six weeks away.)

ADD: The Milwaukee Journal-Sentinel has the best live-results page in the state, and therefore that page is linked…. HERE.

And Then They’ll Just Pass It Again…

If You Lived Here, You’d Be Owned By Now 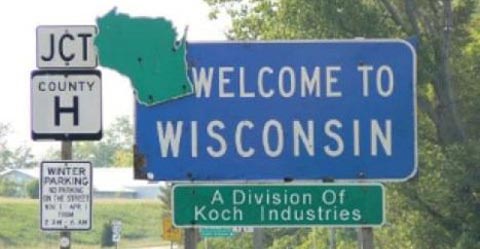 One of my assistants on WRR has contacts in the Highway Department who are most unhappy. This is a real sign out there, more are on the way.

Live, then, until we hear otherwise. Either way, somebody’s a genius.

How The Tea Party Blew Up The GOP

Maybe now is a good time to take a step back and see this whole Wisconsin thing for what it is.  On this evidence, what happened tonight might just be the final blow for one of the two dominant political parties.

No.  Not the Democrats.  The Republicans.

END_OF_DOCUMENT_TOKEN_TO_BE_REPLACED

Yeah, This Will Work

And now the whole thing in Wisconsin has gone supernova in the last couple of hours.

The premise of the Flying Fourteen was that they could deny quorum, because you need three-fifths of the chamber present for fiscal bills.  The union-busting stuff that has caused all the ruckus was inserted into a budget bill (on the insistence by every Republican in on the thing that it was necessary to fix the budget mess); thus, the Democratic Senators could get out of the state and block the bill.

This afternoon, the Republicans in Madison decided to create a new bill with only those union-busting things in it.  And then they voted on it. — which apparently sends the thing to conference committee and, reportedly, quick passage as an agreed-upon bill by both chambers tomorrow and signature by the Governor before anybody can do a damn thing about it. [EDIT — it was first passed by a conference committee — which was caught (devastatingly) on tape through the Wisconsin version of C-SPAN — and then immediately sent to the Senate, which voted on it.  Last stop before Walker is a vote by the Assembly tomorrow morning.  That should be must-see teevee.]

The protests, which had to be honest waned a bit this week, started up again almost instantaneously.  The crowd, from what little I’ve gleaned from this, looks to be absolutely livid.  There was also a report that the hold-out Senators decided to come back to Madison to fight this, but then a decision in mid-trip to turn around.  (No confirmation on any of this, naturally.)

All sorts of angles here — the first of which has to do with Scott Walker’s claim that this was related to the fiscal health of the state, but then changing tack in order to ram it through after three weeks of pure legislative chaos.

There will be more to this as the night moves along, but it is safe to say this: WOW.