No Go on Checkpoint Cheesehead…

“Wisconsin Gov. Scott Walker on Monday dismissed as ‘ridiculous’ a letter from a Democratic state Senate leader who suggested a meeting ‘near the Wisconsin-Illinois border’ to discuss the state’s budget impasse.” [CNN] 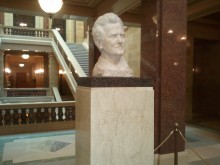 So I figured I’d make the drive up from Chicago to see what all the hub-bub was about.  I decided to leave early, as word was that all the downtown and campus parking ramps filled up quickly; come late, and I’d have to park in a fallow field or something.

Turns out I came too early.  Thus I had forgotten one of the most important things I learned in law school — Sunday mornings are dead as a doornail around here.  Saturday night, after all, is Saturday night — if you were up-and-at-em at 9:00 in the morning on Sunday, you were either going to church or you didn’t party hard enough. 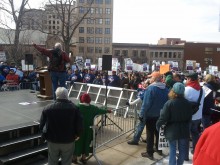 But things did get rolling around 11:00 at the Capitol — the Letter Carriers’ union was kicking things off.  A stroll around, and inside, the Capitol gave me a taste of what has been going on here for the past three weeks.  The general impression you get was that this was, exceedingly and without question, a civil crowd.  There were maybe one or two signs that pushed the limits (like one with a picture of Osama bin Laden with Scott Walker’s face superimposed — carried by a firefighter, of all people).  Other than that, the reports of violent overthrow and armed rebellion have been greatly exaggerated.

END_OF_DOCUMENT_TOKEN_TO_BE_REPLACED

It had to happen.

END_OF_DOCUMENT_TOKEN_TO_BE_REPLACED

Wisconsin May Not Be Egypt, But It Might Be Libya

Tweeter JCCentCom is known to his friends as Jeff Cox. He’s also known to his colleagues as a deputy attorney general for the state of Indiana. And now he’s known to his employers as somebody under “immediate review”.

The Indiana Attorney General’s office announced Wednesday afternoon its deputy attorney general is no longer employed by the agency, after reviewing political website Mother Jones’ published allegations that he advocated the use of force against protesters in Wisconsin.

UPDATE: Walker’s office has confirmed that it was him on the call. The Buffalo Beast’s website has crashed, but HuffPo’s Jason Linkins spoke with the publisher and has details about the call. Transcript here if you don’t have time to listen to the recording, but it’s fascinating to hear how little the caller had to say to get Walker to blab on.

END_OF_DOCUMENT_TOKEN_TO_BE_REPLACED

“Indiana Democrats are reportedly joining their Wisconsin counterparts in staging an exodus from their state to protest a new union-busting Republican measure. Only two of Indiana’s 40 House Democrats showed up for a session Tuesday morning, precluding Republicans from attaining the votes needed to proceed on motions.” Governor Mitch Daniels calls for Republicans to stand down. [Raw Story, Indianapolis Star]