Who could have predicted that BP would abandon the people it hired to clean up its mess?

One Suit Replaces Another…

And things will improve, of course! “Tony Hayward, the embattled chief executive of BP, has agreed to step down and be replaced by Robert Dudley, the company’s most senior American executive who is now in charge of BP’s operations in the Gulf of Mexico, according to a person close to the company’s board.” [NYT]

Break out your martini shaker and/or your bottle of Xanax, as Stinquer DodgerBlue shares with us this satellite image of close to the entire Gulf of Mexico coated with oil. 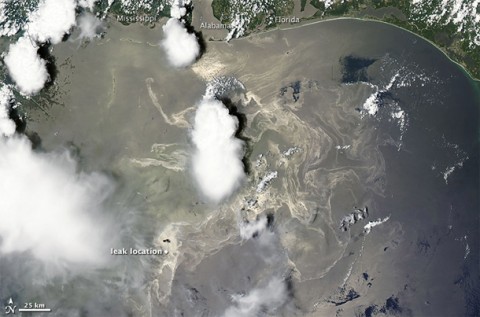 Meanwhile, the broken oil well was uncapped this morning and currently is spewing oil uncontrollably.  The cap had to be removed after BP engineers drove their submarine into machinery being used to clean up the fuel. It’s not a bumper car, Einstein!

More details after the jump, plus something to hopefully keep us all sane.

END_OF_DOCUMENT_TOKEN_TO_BE_REPLACED

And let us not forget that the environment is not the only thing that will be fucked up for a long time – we will be too!

Spewing More Than Just Oil in the Gulf

British Petroleum officials are having a hard time keeping their oil-slicked boots out of their mouths in the wake of the explosion of the Deepwater Horizon platform which killed 11 workers and has resulted in the worst environmental disaster in U.S. history. To wit, its CEO, Tony Hayward, was forced by his PR flacks to apologize after he told Louisiana residents “I’d like my life back.”

Yeah, wouldn’t we all, especially the dead workers and dead wildlife.  BP’s attempts to block the media from capturing the extent of the damage, with the complicity of the Coast Guard, are starting to crack.  Apparently, so is their CEO.

Charlie Riedel from the Associated Press got images that would tear apart the most cynical and blackened of hearts, except, of course, the one belonging to a certain Halliburton executive/former vice-president who has seen his stock options go up 3,281% in one year, according to a Senate study.

The good people at the Natural Resources Defense Council are tirelessly covering and speaking out about this so-called “accident” and have compiled some of the bullshit spewing out of the mouth of BP CEO Hayward.

END_OF_DOCUMENT_TOKEN_TO_BE_REPLACED

SFL informs us that the oil spill is much worse than anyone let on, and now oyster emails me from New Orleans with a photograph that’s going viral: 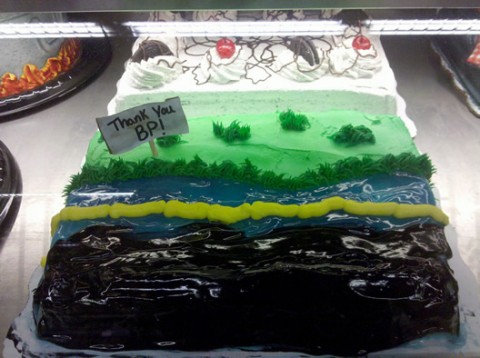 Spotted in a Breaux Mart Supermarket in New Orleans: The “Thank You BP! Oil Spill Cake.”