Innocent until proven guilty, and I don’t think Sen. Yee was the original target of the FBI investigation, but holy hell:

State Sen. Leland Yee, an outspoken advocate of gun control and open government, was arrested Wednesday on charges that he conspired to traffic in firearms and traded favors in Sacramento for bribes – campaign cash paid by men who turned out to be undercover FBI agents.

Yee, a Democrat who represents half of San Francisco and most of San Mateo County and is running for secretary of state, was one of 26 people ensnared in a five-year federal investigation that targeted Raymond “Shrimp Boy” Chow, a notorious Chinatown gangster who had claimed to have gone straight, officials said.

The charging docs read like something straight out of Hollywood. END_OF_DOCUMENT_TOKEN_TO_BE_REPLACED

And Not an Earthquake or Lightning Bolt To Be Felt… 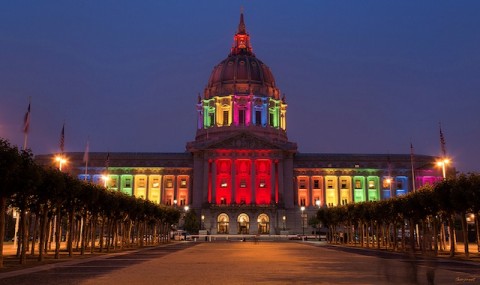 Oh haaiii, it’s Pride weekend here in Ess Eff, in case you didn’t hear. And you may have heard the sound of a million wingnut heads asploding as the Ninth Circuit wasted no time in lifting its stay on Judge Walker’s decision striking down Prop. 8, and while the City and County of Ess Eff can be highly inefficient in some areas, they are super efficient in issuing parking tickets and marriage licenses.  City Hall will be open all weekend until 8 pm each night.

Catch a flight and land at SFO. 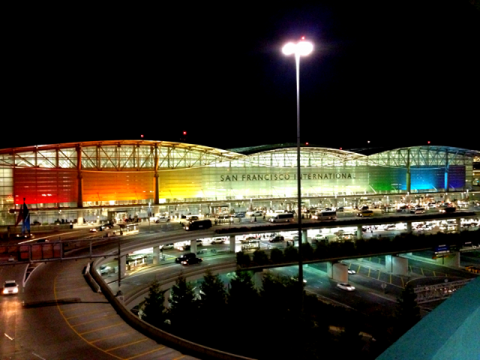 Put a Ring On It, Castro & Market Edition

Normally I’m not a big fan of public displays of affection, let alone high-pressure public marriage proposals, but after hearing some shit news tonight about a friend whose partner suddenly died, I feel the need to post THE.MOST.AWESOME.CASTRO.MARRIAGE.PROPOSAL.EVER.

Beyonce, take it away (and it’s worth watching to the end).

“I Am Not a Sixth Grader”

Snap! Go DiFi, tell that little punk where to stick it. From the Ess Eff Chronicle:

Sen. Dianne Feinstein, a 20-year veteran Democrat, clashed fiercely with Tea Party-backed newcomer Ted Cruz of Texas, when the freshman began lecturing the Californian about the Constitution during a debate over Feinstein’s assault weapons ban. … The clash was reminiscent of an exchange Feinstein had nearly two decades ago with the since disgraced Larry Craig, an Idaho Republican, who lectured the “gentle lady from California” on firearms during debate over Feinstein’s successful 1994 ban that expired in 2004.

No issue is more emotional for Feinstein. She became mayor of San Francisco as a result of the assassination of George Moscone, and was the first to discover supervisor Harvey Milk’s body, slipping her finger into the bullet hole as she sought a pulse. […]

Cruz asked Feinstein whether she would “deem it consistent with the Bill of Rights” if Congress did the same thing to the First Amendment that she contemplates with the Second Amendment. Her assault weapons bill bans certain weapons, so Cruz asked whether Congress could ban certain books.

The Stanford-educated Feinstein replied, “I am not a sixth-grader,” and said her bill specifically exempts 2,271 weapons. “Is this not enough for the people of the United States?” she asked? “Do they need a bazooka?”

Clip of DiFi and Cruz after the jump.

END_OF_DOCUMENT_TOKEN_TO_BE_REPLACED 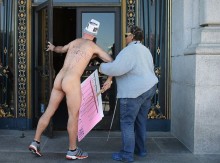 Top story being the local football team playing a sport game tomorrow in New Orleans, assuming they can stop shooting off their mouths with homophobic comments.

Back in Ess Eff, we’re dealing with the folks who are pissed off that Board of Supes passed an ordinance banning public nudity except for certain events, and a federal judge threw out their challenge that alleged it violated their First Amendment rights. If there’s anything we do well in The City besides hella-good coffee and burritos, it’s protest outside City Hall.

Nude activists Gypsy Taub, George Davis, Trey Allen and Dany DeVero were detained and cited by police after they stripped down in front of City Hall on a mild and sunny afternoon. A handful of other nudity proponents, some topless, carried signs and hurled insults at the dozen police officers who led the full-frontal offenders away.

Allen, 30, had “War is obscene, not my body” written on his back. Before the police came, he drew cheers from the crowd when he escorted a blind woman up the steps.

“This might be my first citation!” he said excitedly. “I don’t do it to protest, just to enjoy the weather.”

From the Stinque Crime Blotter 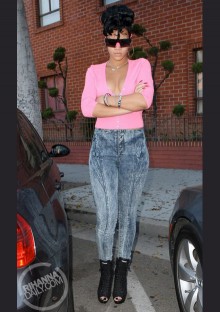 I was going to do a happy trails post for Stormin’ Norman, but after reading this only in Ess Eff news report, I had to share it.

A teenage boy escaped while being transported to juvenile hall in San Francisco on Wednesday night, a police spokesman said today.

The teen is black, and was last seen wearing a glittery black tank top and dark acid-wash jeans, according to [SFPD Spokesman] Shyy. He did not know what charges the boy was facing.

Well, I think the Stinque Fashion Police could name some felonies and misdemeanors.

Most Awesome Newspaper Correction Ever

The Chronicle strives to cover the news accurately, fairly and honestly. It is our policy to correct significant errors of fact or misleading statements. Please write to Corrections, San Francisco Chronicle, 901 Mission St., San Francisco, CA 94103; send e-mail to corrections@sfchronicle.com; or call (415) 777-7870.

[Who is Peaches Christ?]