The slaughter of twelve people in a bar Wednesday night was only a local story.

END_OF_DOCUMENT_TOKEN_TO_BE_REPLACED

We were fifteen in 1974. It was, in retrospect, maybe not the beat time to be growing up in America. Our political memory began with a pair of assassinations six years earlier. Drastic measures were taken to stabilize the economy three years after that. The first of several gas crises struck a couple years later. And, oh, a President resigned that August.

A month later, we started high school. We were fifteen, after all.

High school was, well, high school. Nothing special about that. We went to class, we participated in band and drama, we did what kids do.

Funny thing about that: Not once, not then, not before, not later, did it ever cross our mind that some idiot might walk in and shoot up the place.

And never could we imagine the people running our country not giving a shit if someone did.

END_OF_DOCUMENT_TOKEN_TO_BE_REPLACED

What We Talk About When We Keep Talking About It

So, we’re still talking about it.

As we should be.

But at least we’re still talking about it.

So let’s talk about it.

END_OF_DOCUMENT_TOKEN_TO_BE_REPLACED

The Slaughter of Innocents

Seventeen people were gunned down in cold blood at a high school last week.

This is a preventable tragedy. We know it’s preventable because nations around the world prevent it. In cases like Australia and the UK, it took a tragedy to spur action. But action followed, and the tragedy was not repeated.

In America, action does not follow. America allows the slaughter of innocents. If anything, America makes the next slaughter easier than the last.

This is not news.

END_OF_DOCUMENT_TOKEN_TO_BE_REPLACED

“Millions of NRA members and not one has shot up a school,” we were actuallied on Facebook today. “That’s a fact.”

About five million, more or less. They pay their forty bucks a year to “help us defend your Second Amendment freedom whenever and wherever it comes under attack.”

Their money, along with that of weapons manufacturers, is funneled into politicians who work tirelessly to do nothing — or worse — to solve a problem that has killed 1.5 million Americans since 1968.

They are all accessories to murder.

END_OF_DOCUMENT_TOKEN_TO_BE_REPLACED 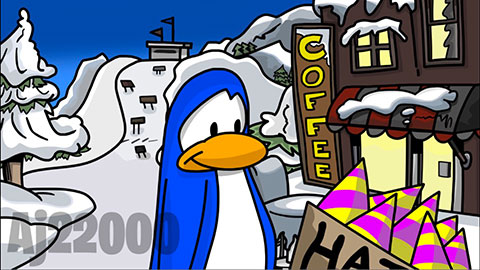 Feb. 13:
“I am very pleased to show everyone my latest piece, a tribute to the @clubpenguin Beta Test Party!”

END_OF_DOCUMENT_TOKEN_TO_BE_REPLACED

Keep and Bear It

In DC v. Heller, the 5-4 Supreme Court case that decided the meaning of the Second Amendment until Republicans are unable to steal justices, Antonin Scalia cites a 1931 judgment that argues for a very straightforward reading of Our Exceptional Nation’s founding document:

“[t]he Constitution was written to be understood by the voters; its words and phrases were used in their normal and ordinary as distinguished from technical meaning.”

And then, just like any normal and ordinary reader, Scalia proceeds to sort the amendment into prefatory and operative clauses, the absence of grammatical constraint on the latter by the former, comparisons of sentence structure with other constitutional passages, and other normal and ordinary observations that strongly recall our first year as a normal and ordinary graduate student in philosophy.