The Fashionista of Tripoli

Yes, he was a tyrant and a terrorist who was likely suffering from mental illness. And now his country is free of his iron-hand rule. But on a lighter note, Muammar el-Qaddafi (I go with the Gray Lady’s spelling) never failed to impress over the decades with his sartorial choices.  You could always count on Qaddafi to add a touch of  um….well…something to international summits and meetings.  Let’s review, shall we?

(1) While this is a rather sedate ensemble by Qaddafi standards, I figured we needed to start with Muammar and his crush Condi: 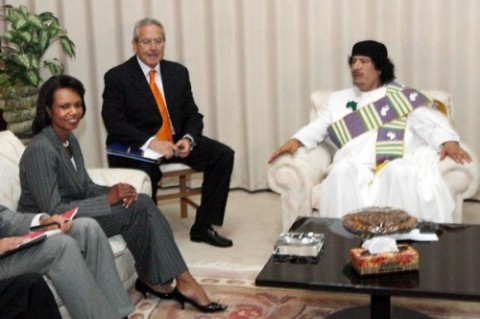 END_OF_DOCUMENT_TOKEN_TO_BE_REPLACED

To Muammar, Thanks for Everything, Condi 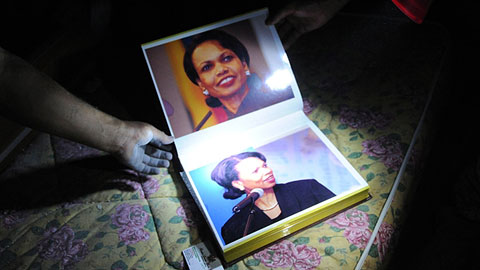 “Rebel fighters who ransacked Gadhafi’s Bab al-Aziziya compound have been turning up some bizarre loot, including the Libyan leader’s eccentric fashion accessories and his daughter’s golden mermaid couch. The latest discovery is a photo album filled with page after page of pictures of Rice, the former secretary of state who visited Tripoli in 2008.” [MSNBC]

It’s Not Treason if You’re a Republican. 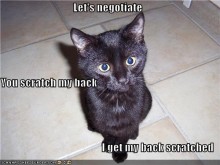 As we’re all aware, senators McCain and Graham have been harsh in their criticism of the president’s Libya strategy. Why was he coddling Qaddafi? Why didn’t he man up and take him out like a real American patriot?

Even now, when it seems a great victory has been won promising $2 gas by September, McCain and Graham congratulate our  NATO allies, even the French, but not the president.

We here at Stinque wondered why. Why such a mealy-mouthed response? Apart from the obvious reasons?

Well it seems that just two years ago McCain and Graham, with BFF Lieberman, were in Tripoli to reassure Qaddafi that support for him was building in Congress and that he need have no fear his supply of American munitions would be cut off. In fact it would be increased.

Though the delegation was no secret it seemed to have been forgotten till Wikileaks posted the cable. And now McClatchy and others have picked up on it.

(And don’t bitch at me about the picture. It was either that or dead Libyan rebels.) 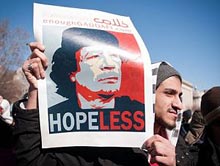 Like most God-Fearing Americans, we’ve been completely ignoring the Middle East, since dictators aren’t known for dick-tweeting. But it appears our Instamatic Slumber (sorry, no prize for unpacking the references) will soon be coming to an end:

A bipartisan group of House members announced on Wednesday that it is filing a lawsuit charging that President Obama made an illegal end-run around Congress when he approved U.S military action against Libya.

“With regard to the war in Libya, we believe that the law was violated. We have asked the courts to move to protect the American people from the results of these illegal policies,” said Rep. Dennis Kucinich (D-Ohio), who led the 10-member anti-war coalition with Rep. Walter Jones (R-N.C.).

Yes, well, Kucinich, we know. But Agent Orange is also threatening to dust off the 1973 War Powers Resolution if we don’t stop kinetically acting in Libya by Friday, and the White House is making its case today. Time to grow up and put on our Big Boy pants, we guess. And this time, leave them zipped.

Now We Know How His First Two Wives Felt

Exercise a no-fly zone this evening… The United States doesn’t need anybody’s permission. We don’t need to have NATO, who frankly, won’t bring much to the fight. We don’t need to have the United Nations. All we have to say is that we think that slaughtering your own citizens is unacceptable and that we’re intervening. And we don’t have to send troops. All we have to do is suppress his air force, which we could do in minutes.

The standard [Obama] has fallen back to of humanitarian intervention could apply to Sudan, to North Korea, to Zimbabwe, to Syria this week, to Yemen, to Bahrain… We could get engaged by this standard in all sorts of places. I would not have intervened. I think there were a lot of other ways to affect Qaddafi. I think there are a lot of other allies in the region we could have worked with. I would not have used American and European forces.

We presume you’d prefer not to see Fucking Newts, so we’ll save that Google Image search for another occasion.

From the Halls of Montezuma…

…to the shores of Tripoli.

UPDATE: The military has named this “Operation Odyssey Dawn” —  who the hell comes up with these idiotic names for military operations?

“Embattled Libyan leader Moammar Gadhafi is set to be deserted by another close ally after his Ukrainian nurse said she was heading home. Galyna Kolotnytska, described in a diplomatic cable published by Wikileaks as a ‘voluptuous blond’ who ‘travel[s] everywhere’ with Col. Gadhafi, called her family in Kiev on Friday to say she intends to return to Ukraine, her daughter told daily Segodnya.” [WSJ]