Stinque
Home Latest Comments Log in
If it smells, we’re on it.
Stinque
Assholes, they do vex us.
Sean Hannity's America 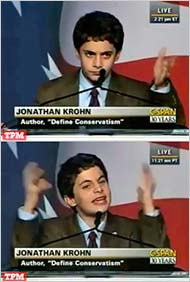 Sarah Palin. Joe the Plumber. Rush Limbaugh. Eric Cantor. Bobby Jindal. The GOP all stars who would save their party are a pretty sorry bunch. They are deeply ignorant and breathtakingly selfish people. Yet the wingnuts heap praise on these loons and clamor for one of them to ride to the rescue.  And now there’s another candidate:

SITTING in the back seat of his mother’s van as she drives through Atlanta suburbs, Jonathan Krohn is about to sign off with a conservative radio talk show host in Florida. In the 40 minutes he’s been on the air, with the help of his mother’s cellphone, this hyper-articulate Georgia eighth grader has attacked the stimulus bill, identified leaders he thinks will salvage the Republican Party’s image, and assessed the legitimacy of Barack Obama’s birth certificate.

Would it surprise you if I told you he’s home-schooled?

The interview concluded, Jonathan wistfully handed his mother her cellphone. His parents still won’t let him have one, even though he turned 14 last Sunday, right after he became an instant news media darling and the conservative movement’s underage graybeard at last weekend’s Conservative Political Action Conference in Washington.

A 14-year-old boy whose voice hasn’t changed yet?  This is how the GOP plans to come back?

With some skepticism, they gave him a spot on a Friday panel of grassroots activists. But Jonathan, an experienced child actor, rocked the house with a three-minute speech, which was remarkable not so much for what he said, but his electrifying delivery. The speech was part pep talk, part book promotion. By Saturday morning, an archdeacon of the movement was saying, “I’m Bill Bennett: I used to work for Ronald Reagan and now I’m a colleague of Jonathan Krohn’s!”

Bill, Bill, how far you have fallen.

In less than a week, Jonathan appeared on “Fox and Friends” and CNN, and broadcast network anchors requested interviews. He has lost count of the number of radio shows he has spoken on. Though his family has received hate mail, accusing them of brainwashing their son, a Jonathan Krohn fan club has sprung up on Facebook. High honors: Jon Stewart has already poked fun at him.

Of course none of this has gone to the kid’s head:

Why just that morning, his mother, Marla Krohn, marveled, a staff member for a potential candidate for Georgia governor asked for a meeting with Jonathan. In her gentle drawl, Mrs. Krohn said cautiously, “I’m not sure I’m a supporter of his.”

“Neither am I,” Jonathan piped in.

“But I’m a voter,” Mrs. Krohn reminded him firmly.

Jonathan retorted, “Now that I’m a political pundit, I have the ability to influence people. I have to think about it!”

I predict a rapid rise for this little sociopath.  President of the College Republicans (no military service, natch), a few years in the state house, then on to Congress.  He will marry, then swim upstream and spawn. In 2023 look for him to get caught a) with a hooker, b)molesting small boys, or c) tapping his toes while offering twenty bucks to suck some undercover cop’s dick in a public bathroom.  Of course none of these things will cause him to resign.  It’s the GOP way.

Future pillow biter. And probably left handed. I feel a certain kinship, although I hate it when my fellow southpaws use their incredible powers for evil.

No, no, no. Come on, Bloggie — allow yourself to think for a second. The kid is wearing a necktie. College Republicans wear bow-ties. And cardigans. FAIL.

[Not for nothing, but here is Kathryn Jean Lopez from earlier today —

“Outside of his reversal of the Mexico City Policy on overseas abortions and his nomination of Kathleen Sebelius to head HHS (which angered some anti-abortion activists), Obama hasn’t really waded into the culture wars during his first seven weeks as president.”

That’s bad enough for me for the first seven weeks.

He’s from Gwinnett County, home district of John Linder of Fair Tax fame. But why, oh Lord, does he have to be from here?

I should also mention that I loved when Jon Stewart had the picture of Limbaugh, Coulter and this tool with the caption “Two and a half men”.

rptrcub: I was in Gwinnett County recently. Apart from the fact that there is a Waffle House every two miles — “I’m not ready for breakfast just yet… maybe in three more minutes” — I found it to be a rather vacant, silly place. Do I have that right?

I feel kinda bad for this kid as I can see him as a future political sex scandal of the future.

So it’s down to the Hitler Youth and Werewolves like Gingrich for Them now.

@chicago bureau: I’m sorry, but the FAIL is yours this time.

You ever seen a child evangelist go shit-for-brains preaching on YouTube? Same shit. Somebody strangle this little defective human before he hurts himself in a diapers/hookers/butt secks scandal. Their moms can’t save them from those.@rptrcub: You already know the answer to that one, handsome.

blogenfreude: See, I didn’t know that they were blending in by ditching the bow-tie. Didn’t get the memo — I’m not on the mailing list of the College Republicans, for reasons that I am not altogether proud of and would rather not discuss. Thus: must get in the know some other way — and sometimes it leads to a gap of information.

@ManchuCandidate:
It could happen sooner than you think if he gets an internship with the wrong Congressman.

@SanFranLefty: It’s that or Stormy. Which is worse for you?

Yeah, this kid made my gadar go off like a submarine klaxon. I got a bigger Ganymede read from him than I did from David Archuleta, and that’s saying something.

@blogenfreude: Oy, I see I have been served Morton’s fork.

@SanFranLefty: It’s raining here and I’m grouchy. And the microwave is always being used and I can’t heat up my lunch.
@Tommmcatt: It’s What Your Right Arm Is For!: Like The General says – 99.7 Gannons on the RoyCohndar.

@Tommmcatt: It’s What Your Right Arm Is For!: Jonathan, who wrote an 86 page treatise named Define Conservatism, has been getting tons of unnecessary attention ever since Friday, when people decided they didn’t care about Rush Limbaugh anymore. The 14 year-old already has more experience than Sarah Palin, and will probably become leader of the RNC after Michael Steele digs himself a hole he can no longer escape.

@homofascist: Yes. I was rolling on the floor when I saw that. Jon Stewart has been kicking ass for the last week.

This kid kind of reminds me of this baby “preaching”. Talking gibberish and being cheered on by adults who should know better.

@ragingmonk: Just like the child evangelists of yore. Marjoe Gortner comes to mind. If only he wouldn’t.

Well that’s sweet, the GOP has turned into a cross between a circus sideshow and a snake-handling, glossolaliac revival. Not that they’ve ever been strong on ideas, but now they’ve gone from hot-button issues to novelty acts. Next up, a talking dog refutes Obama’s foreign policy!

The stimulus bill as a way of addressing the current economic downturn is an ambitious plan of historic proportions…for me to poop on!!!!!!

@blogenfreude: Oh holy shit, dude. You gotta warn people when linking to that monstrosity. Fuck, was that thing even human?

@Tommmcatt: It’s What Your Right Arm Is For!: Mo In The Making.

@blogenfreude: Was the tie-wearing sonuvagun Rivkin? and how did he get on the Council on Foreign Relations, pray tell (if it is Rivkin)?

@drinkyclown: I’m filled with admiration. All of that should be comment of the day, nay, of the month.

@lynnlightfoot: As my roommate, who is in the know, recently explained, most anyone can become a member of the Council (ahem), and it’s something for people who possess no more substantive foreign policy experience to hang their hat on when they appear as a talking head on the teevee.

@lynnlightfoot: Also, I’ve only seen the dude once or twice on MSNBC, but that don’t look like him.

Fag-in-Training, nach. Or Fashion Institute of Technology, which is exactly the same thing, in my experience.

@chicago bureau: You pretty much have most of metro Atlanta outside of I-285 correct.

Awww, ain’t it cute the way he spouts dogma just like a real Republican? His mom better start greasing his butthole now to get him ready for all the “adoration” he’s likely to receive from the closeted self-loathing gay-bashing freaks in the party.

Here’s a kid who is too intelligent for his own good, with none of the perspective of true adulthood, who is being fawned over by adults who want to use him.
I understand his plight in a very personal way.
All I want to know is: Who will do the right thing and slip him some acid?

Then he can do a precocious little bit from Fast Times at Ridgemont High!

In the 60’s, acid turned ROTC kids into draft resistors overnight. It would be cool to see the look on the Repub’s faces when the kid started giving rambling speeches a la Timothy Leary …

@lynnlightfoot: Tomcatt nails it. Fag in Training. Here you have me channeling my inner chorus boy.

@Benedick: A year or so after high school a friend was reporting on her visit with another guy we knew who at the meeting hopped into another guy’s lap, threw his hands in the air and squealed “I’m gay!”

“He should have become a priest, because he makes a lousy fag,” she said.

he reminds me of those little bastards you see in “pageants.”
after i save all the animals, i’m going after the jon benet mothers of the world. they should all be in jail for severe abuse and neglect of a child.
however i’m glad he exists because jon’s 2 1/2 men Killed Me !!!!!

@baked: They air The Daily Show in Israel, or are you watching online?