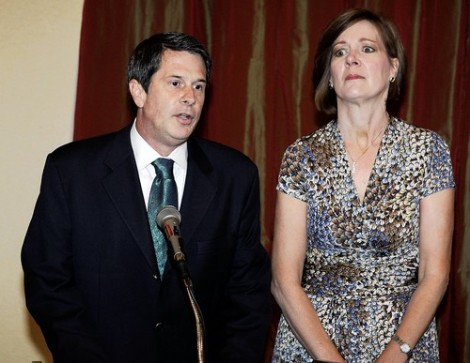 Sen. David Vitter (R-LA), whose career became mired in the D.C. Madam prostitution scandal back in 2007, and is now headed into his 2010 re-election campaign, is championing the cause of family values in the omnibus bill, and the need to stop government spending on family planning. Really.

That’s the same David Vitter who did the following:

“It was a rule that I could not wear any perfume, body lotions, not even take a shower,” [former prostitute Wendy] Ellis said. “Because he did not want any scent on him whatsoever. He would always come in, hang his jacket on the door, go into the bathroom and take a shower. He would come out with a towel wrapped around him and sit down on the bed. We’d talk. And then he’d do his business.”

Ellis also said that “usually people would leave their condoms in the trash can,” but Vitter would take his used condoms with him.

Condoms for the GOP, but not for thee, bitchez.

Everyone else has to use Tabasco sauce.

Something smells stinky about this. Could it be the diapers?

Mmmm-mmmm! Good to the last drip.

Because what we need right now is more poor people having children they cannot feed.The wording of Vitter’s amendment, btw:
“none of the funds appropriated under this Act shall be made available to Planned Parenthood for any purpose under title X of the Public Health Service Act.”

Not just “family planning” but PP specifically. Coincidentally, PPFA has finally formed a lobbying division, to which I contribute monthly, instead of keeping up the whole non-partisan, apolitical charade.
VOTE STORMY!! (bloggie, consider this my blessing to post a pic of your girl).

I know in LA your disqualified for office if you’re caught with a dead girl or a live boy. I guess for diapers it depends

With a name like Tommmcatt…it has to be good

You’ve been saving that one up, haven’t you?

Please chop them off at your earliest convenience. No jury would convict you. KTHNXBI.

@Mistress Cynica: I was going to post a picture of Stormy, but I CAN’T TAKE THE TAUNTING.

Is this photo doctored? If not, I think the Phototog who shot it deserves an AP award.

It looks like someone just captured the exact moment someone jabbed Mrs Vitters’ hooha with a proverbial hot poker in a “The very moment you can tell when Lisa Simpson broke Ralph Wiggum’s Heart kind of way.”

@fupduk:
Definitely, you have arrived.

Wise man. Do not eff with JNOV.

He is such a fucking sack of shit.

@Mistress Cynica:Thank you for donating to them. Instead of donating to my local Planned Parenthood affiliate, which benefits from being in an affluent liberal area of the country, I donate to the affiliates doing the good work in places like South Dakota, Idaho, Nebraska, etc. And PPFA has had a 501(c)(4) for more than 15 years, actually.

@blogenfreude: DON’T YOU DARE DO IT!

There’s a lot going on in those magic underpants.
http://www.advocate.com/news_detail_ektid74249.asp

@SanFranLefty: I have 10 or 15 minutes in the taxi to think about whether to put up a Stormy photo. Are you offering anything if I don’t?

@blogenfreude: The past three days have been super shitty for me. Please don’t do this to me. I offer you my undying gratitude and admiration. That’s about all I can afford.

Canary in a coalmine Detroit offers a preview of what the coming apocalypse/Armageddon will be in the U.S. Check out the photos. The piles of abandoned books and student discipline files made me want to put my fist through a wall.

@Jamie Sommers is unfairly harsh!: I think Vitter is nursing his own baton rouge tonight.

@Nabisco: Well played.
@SanFranLefty: I had no idea plastic tittays did that to you. I’ll resist the temptation … this time.

ADD: I just realized I’ve posted 4 comments in like 10 minutes. I’ll go away for 9 hours now. It’s more that these days I just never get to play in the Stinque sandboxes at the same time as my friends baked or JNOV. Fucking time zones.

@SanFranLefty: That was my old problem with Wonkette: By the time I woke up, everybody on the East Coast had had their fun.

And thus the other reason for a scheduled 7 a.m. post: I get the first word in.