Whether you are buying a cup of coffee or renovating your home, by supporting businesses that support workplace equality you send a powerful message that LGBT inclusion is good for the bottom line.

…allowing the Friendly Bigots over at WorldNetDaily to turn the list upside down:

Bonefish Grill isn’t part of the Homosexual Agenda? So if we order a delicious, succulent, mouth-watering Bang Bang Shrimp, we won’t catch anything?

“An activist for a sub-group of the anti-gay group the National Organization for Marriage is speaking out against the use of the rainbow as a symbol for gay rights. ‘We are the real rainbow coalition. The gay lobby does not own the rainbow,’ she said.” [TPM]

Don We Now Our Gay Obsession 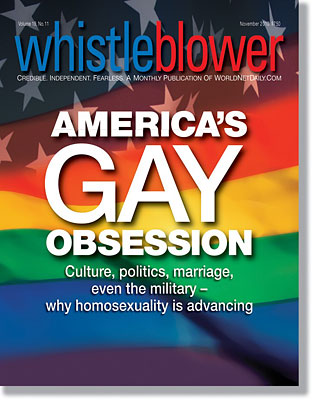 We think WorldNetDaily has something personally important to reveal to us, but we can’t for the life of us imagine what.

Are Americans playing around with the end of civilization? [WND]

Charlie Crist Sucks It Up…

“Charlie Crist, the current governor of Florida and Independent candidate for US Senate, is prepared to issue a ringing endorsement of gay rights in a document slated to be released as early as this week, according to a copy of a position paper provided in advance Sunday to RawStory.com.”

Michelle Malkin is an outspoken advocate of sunshine in government proceedings.

Well, except when the sun shines in the wrong place:

This isn’t a sincere educational effort to provide transparency to the public. It’s a flagrant attempt at making Prop. 8 a show trial — and intimidating Prop. 8 backers who will be called to testify.

You would think Prop. 8 backers would be proud to show their faces in public, proclaiming their high principles in denying rights that don’t affect them whatsoever. Apparently, you would think wrong.

Prop. 8 trial will be shown on YouTube [SF Chronicle]

Love Amid the Ruins

It started out as a hearing for the DC gay-marriage bill. It ended with a very immodest proposal.

During D.C. hearing on same-sex marriage, witness interrupts by proposing to his partner [Think Progress] 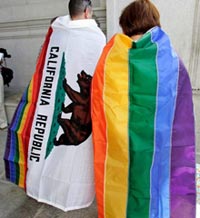 We have no idea what this means…

In a signing message, Schwarzenegger said California will not recognize the couples as married but will “provide the same legal protections that would otherwise be available to couples that enter into civil unions or domestic partnerships out-of-state. In short, this measure honors the will of the People in enacting Proposition 8 while providing important protections to those unions legally entered into in other states.”

So did the Governator just pull a fast one? And if he did, who got pulled?