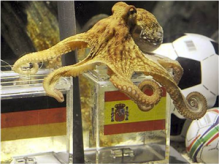 So your team just lost the quarterfinal of the World Cup, what do you do?

If you’re German midfielder Bastian Schweinsteiger (say that one three times fast), you cry, then like a man, dry your tears and take off your shirt to win Stinque’s World Cup Hottie of the Day award! 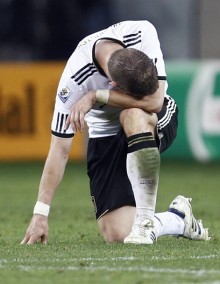 The baring of the chest. Another waxer? 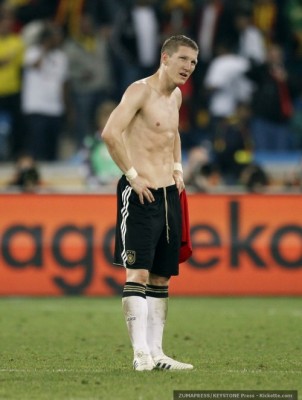 He’s cute in that Rolf from Sound of Music sort of way. Official FIFA mugshot: 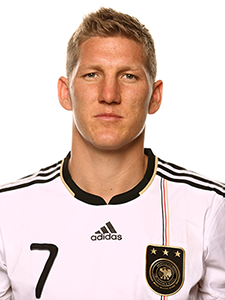 The Germans face Uruguay in the third place match on Saturday.

And Spain faces Holland in the World Cup championship game on Sunday.

She’s no Sara “Pastasauce” Carbanero, but here’s a Spanish fan from today’s match for you str8 boys: 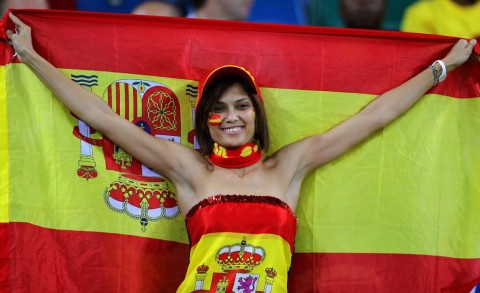 Coming soon, if I can master the technology (aka I can get Nojo to explain it to me), there will be a poll for Stinquers to vote on who wins the World Cup Golden Vuvuzela for overall Hottie of the Tournament.

Not as voluptuous, but awfully pretty, as are we all. (Moar Beerz then more gawking…)

Another mitzvah, Lefty, you’re racking them up, so to speak.

ADDDDD: And he looks like a whiner. Crying aside. Crying – fine. Whining – not.

Oh, and Not the MSNBC ad thinks I want to date a wealthy woman of not substantial health in American Apparel. Uh, okay.

HAHAHA! Now thinks I want laser hair removal. Is it always this funny?

@JNOV: He wasn’t a whiner – he plays hard. I think in that photo he was trying to stop crying, and so it’s kind of a weird face he’s making, not that I was really looking at the expression on his face.

Okay — so he lost and then took off his shirt? Mad props for that.

@nojo: So do you get paid if we click on the Not MSNBC Ad? I just did for the first time…I was weak. I thought I saw a pair of these, but they suckered me. Meh.

@JNOV: Just checked the other day, and Google seems to be feeding me $20/month, which is what MSNBC was feeding when they told us to fuck off.

So yeah, we get pennies for clicks. We might even get pennies for pageviews these days. But don’t go out of your way — there aren’t enough folks here to make a substantial difference.

Oh, right. Flurry of clever remarks on Twitter, then on to dinner for everyone. A downgraded 5.4 isn’t worth lingering over.