Today the much vaunted Mengele Bowl (HT: Dodger) occurred at the World Cup between Germany and Argentina, but apparently Argentina failed to appear for the game, as there’s no other way to explain their 4-0 shellacking.

Or maybe tonight’s World Cup Hottie, Lukas Podolski, had something to do with the German victory. A fantastic player, named Man of the Match by FIFA, he didn’t score but he was a key player in the midfield helping Germany capitalize upon their strong defense and translate it into goals.

And he likes to wax his body. Apparently a lot.

Heh. Knew I’d get you to click the “more” button.

Here he is shirtless after a game in the first round of the World Cup: 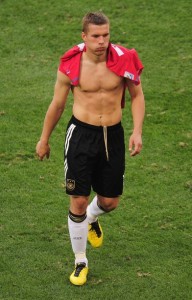 And here’s a close up of him, after a game (not today). 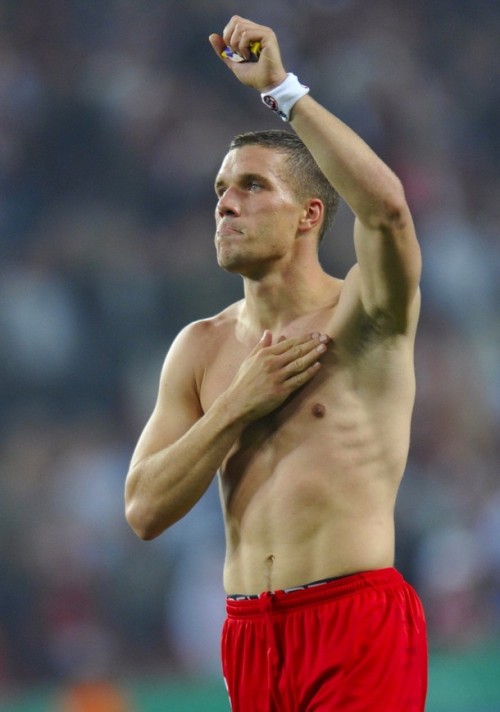 Is it just me, or are his armpits waxed?

I know manscaping is the big thing, but that’s just kind of weird.

More of the beautiful game on Tuesday morning, when Sexy Ears Wesley Sneijder’s Holland plays Andres Scotti’s Uruguay.  Spain-Germany is Wednesday, and the final is next Sunday the 11th.

Wait. Whoa. I like ’em slickish, but no armpit hair? How will I smell his pheromones? Sheesh. That’s like a basic compatibility test.

Yes, in my very rich fantasy life (cuz that’s all I’ve got, y’all), I’d be smelling him.

Shit. I bet he waxes his balls, too…

Chakra Khan™ have mercy. I drink like six times a year, and those rare times I do (holla!), I’m the only drunk one here? I’m about taking my drunk ass to go harass the exmormons…or make stuffed peppers with smoked mozzarella. Sheesh.

@SanFranLefty: Oh! Please to ignore my drunken rantish whining! Yes! I also love this other guy — he’s a douche IRL, but like I’m ever going to have to deal with that. BRB.

@JNOV: Pace yourself, darling. I realized when I checked last night’s thread this morning that you were up past 4 am your time. Did you get any rest?

There’s this group shot, but I’m still looking for that guy with like three names. Not Frank Lloyd Wright — but my mind get stuck on his name when I’m trying to think of three-name people. Argh!

I don’t know a lot about soccer, but it seemed to me that the Germans looked like an experienced team while the Argentines looked like a bunch of guys winging it in a high-zoot pickup game.

And then there’s Ryan…

@SanFranLefty: Oh, that’s cuz I haven’t found his picture yet — he’s been in two or three Olympics — listens to his iPod and sways to the beat before he swims. Name escapes me — Hall?

@SanFranLefty: I wish I could, but if I drink and take sleepy time meds, I might be sleeping the sleep of the dead. I’m not down with that, so I’ll make up for it soon.

I guess I had him confused with Anthony Michael Hall. Meh.

@Dodgerblue: As much as my heart wants a Spain-Holland final, I think it’s going to be Germany-Holland. Ther Germans are on a damn roll, and each game they are playing better. They’re also young with terrific stamina and fitness. The Dutch play with the same precision and discipline as the Krauts. The Spanish have amazing ball-handling skills – watching them flawlessly pass it while the Paraguayans frenetically flailed around them was amazing.

@SanFranLefty: Tell me whom to root for. I owe you at least that.

Okay, yeah — Gary has been kicked to the curb in favor of Ryan Lochte.

Okay, I’m done for now. Carry on, true lovers of the original topic.

Here’s a clip of Argentina beating England in 1986. Diego Maradondo (their current coach) scores an amazing goal – not the controversial “Mano de Dios” – by dribbling by six Brits, including the keeper.

Best part of the clip? Andres “Goooooollll” Cantor, a native of Argentina, breaking into tears in the aftermath. He apologizes to viewers for crying.
Or perhaps the mid-80s soccer shorts.
Or the mid-80s computer graphics.

@JNOV: Dude, I have been rooting for three of these four teams since the start. I don’t know who to root for, except I’m not rooting for Uruguay since they got in due to a really dirty move by one of their players at the end of the Ghana game.

@SanFranLefty: Wow, he was a stocky little bastard even then.

@SanFranLefty: OMFG, love, you gave this old gheyz Saturday night flesh to savor. And comments like “They’re also young with terrific stamina and fitness.” and “The Spanish have amazing ball-handling skills – watching them flawlessly….” about had me on the way to the local ICU.

I think we seem to be confusing footballers with attractive men. Just my take on the world sport thing.

@Benedick: I would LOVE to see pictures of your attractive men. You know, the ones you consider attractive. Not your men.

Something for the Stinque Glee fans.

Hey wait, I’m just waking up! Except you, JNOV: Den Mother is right, you should get some sleep.

@karen marie: There are Gleeks among us?

@Noj, KM: I watched the pilot episode on the plane trip here. Not bad.

Happy Most Beautiful Temper Tantrum Ever Delivered to a Parent Day!

Yay! I’m alive! Note to Self: Beer does not a meal make.

@nojo: I would be, but I think TiVo has other plans when it’s on; probably some psued0-cerebral claptrap on PBS. Maybe I’ll Hulu Glee if I can’t crash a BBQ today.

@DCers: I might be in The District tomorrow — I’ll go to the clubhouse to see if anyone wants to meet up.

@JNOV: but on my phon they are really really tiny.

@Nabisco: I have the same phone, and on my phone, they just require you to do some math… :-P

@nojo: Now, see, I swear there’s been mention of Glee in other threads. Not normally being something that registers very deeply, I can’t name names, but I’m pretty sure someone here is watching it. Click the link anyway. I dare you.

@iPrick: Where have you been, buster? Don’t click the “Sport” tag on this post unless you want two weeks’ worth of flesh.

@karen marie: Many of my (gay) friends are into it, so I get confused about where I have or haven’t seen people discussing it.

@karen marie: I like the girl at the end. Is that the Mexican national anthem?

@Benedick: For you and your pupsters to observe – a scuba-diving dachshund. The diving outfit is the best part.

@SanFranLefty: Nice dog. Not at all sure she’s on board with the whole underwater deal. Maybe she is. My current fave dachshund tale is of the mini who was swallowed whole by an alligator in FL and ATE HER WAY THROUGH FROM INSIDE to escape, unharmed.

When I take the pack to Bluestone Wild Forest, the dachsie likes to get in the lake, so long as he’s got his paws in the bottom, and wet his nose.