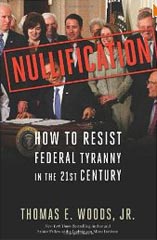 Title: “Nullification: How to Resist Federal Tyranny in the 21st Century”

Blurb: “Citizens across the country are fed up with the politicians in Washington telling us how to live our lives — and then sticking us with the bill. But what can we do? Actually, we can just say ‘no.’ As New York Times bestselling author Thomas E. Woods, Jr., explains, ‘nullification’ allows states to reject unconstitutional federal laws. For many tea partiers nationwide, nullification is rapidly becoming the only way to stop an over-reaching government drunk on power. From privacy to national healthcare, Woods shows how this growing and popular movement is sweeping across America and empowering states to take action against Obama’s socialist policies and big-government agenda.”

Review: “As the documents in Part II of the book reveal, Woods bases his concept of writings all published before the Civil War. To many, that might sound quaint, but to others, that age represented the peak of liberty on Earth (at least certain demographics).”

Footnote: Customers also also bought “Abraham Lincoln: Friend or Foe of Freedom?”, “Lincoln Uber Alles: Dictatorship Comes to America,” “The Real Lincoln: A New Look at Abraham Lincoln, His Agenda, and an Unnecessary War,” “States’ Rights and the Union: Imperium in Imperio, 1776-1876,” and “Negrophilia: From Slave Block to Pedestal — America’s Racial Obsession.” We’re sure there’s a pattern there, but for the life of us, we can’t figure out what it is.

“Politicians telling us how to live our lives”? The only politicians who seem to care about me are the spambots who plucked my name off the rolls of Black Eagle 25ers.

If anything, we suffer tyranny of teh stoopid. And Agony of The Feat.

Man, this crap almost makes me glad that Barry married Michelle, a black woman than a woman of another race especially white. The crazy would have gone to 14 at this point.

This idiot book reinforces what is becoming more than obvious but the MSM is loathe to admit because it would be “rude” that many good ole Southerners and their idiot racist supporters (including a fair number of folks who would have been lynched by WASPs in the not so distant past) haven’t really gotten over the whole Civil War thing and fear of the big black dick.

They don’t like federal laws? Cut off their federal funding, then listen to ’em scream.

Stuff like this almost makes me *want* the Rethugs to take back the House; it’d be funny watching these neo-Confederate douchebags twist themselves into circles blaming Obama for legislation their good ol’ boy reps have passed…

@Nabisco: Just saw the end of today’s Tour stage. Looked like an ugly accident on the I-5.

@Dodgerblue: This piece on oil companies made my head explode this morning. Had to watch Rafa win Wimbledon to calm down.

@SanFranLefty: If you need to get fired up again about taxpayer bailouts for big oil, read this.

i can’t cope with any of this. I am going to make apricot jam, deadhead roses, and read mysteries, and pretend none of this is happening. Lalalalalala I can’t hear you!

@Dodgerblue: I was in the air for all of that, but the reports Ive read are that the cobblestones did what the cobblestones were expected to do. A couple of dinged up riders, but Lance dodged a bullet. I’d hate to see Twiggy the Counter go down, his bones look brittle.