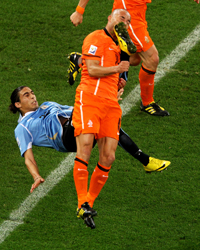 In today’s quarterfinal action of the World Cup, Holland beat Uruguay 3-2. Today’s World Cup Hottie wins Stinque’s title for being a bad ass who wasn’t faking an injury, namely, he got kicked in the face and briefly passed out. Luckily, X-rays show that Holland’s Demy de Zeeuw did not break his jaw, but it did put a scare into the Oranje.

Here’s another angle of de Zeeuw getting kicked in the face: 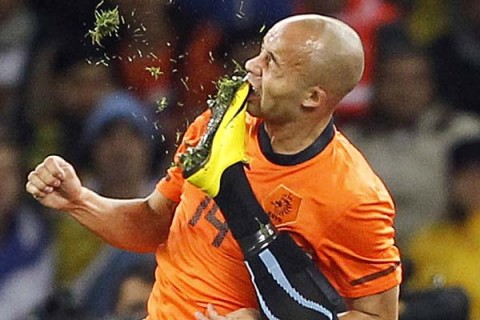 Here’s what his face looks like when there’s not a Uruguayan player’s boot in it. Is it just me, or does he have plucked eyebrows? Between this and the waxed armpits, the manscaping of soccer players is going too far: 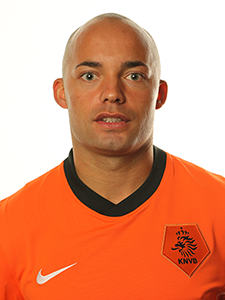 Meanwhile, the three goals scored by Holland means lots of chances for some manlove sandwiches: 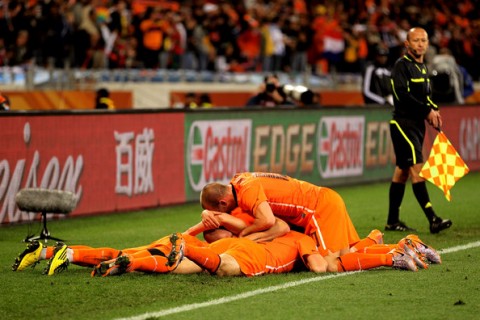 And some interesting contortions. That’s prior WCHotD Sneijder upside down: 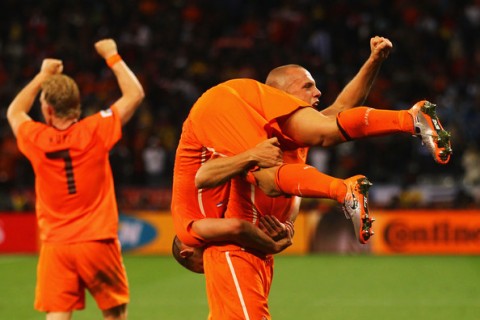 And this is Giovanni van Bronckhurst on the left, who was runner-up for today’s Hottie of the Day award and scored the first goal for Holland. He’s hugging our friend Wesley Sneijder. 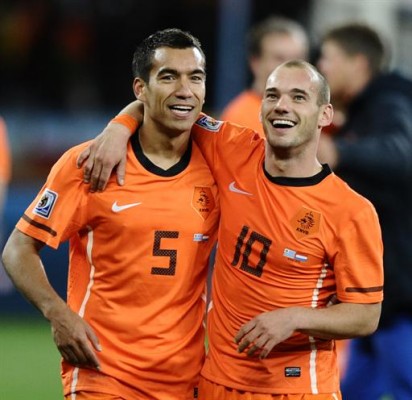 And finally, for the str8 boys, a Dutch fan. 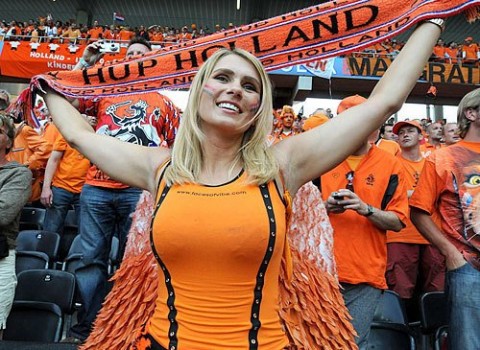 Tune in tomorrow for the results of the Battle of Paella v. Sauerkraut.

Pass the Dutchie on the left hand side, puh-leeze.

ADD: Hup, indeed. Flippin, your forebears are a miraculous people.

@Nabisco: Indeed. Of course, they dropped the ball big time in the cuisine department…with the exception of some yummy cheeses.

Not just brow waxing, but damn if they don’t look penciled in.

Don’t forget the cuisine(s) they “adopted” during their colonial days. I’ve had some quite tasty rijsttafel.

“…and here are some nsfw pics of them blowing each other after the match.”

A boy can dream, though.

@JNOV: Kinda drag queeny. Maybe he has a “hobby”.

@Tommmcat Still Gets Carly Confused With Meg: He’s got the perfectly-shaped head for an awesome wig…

Dutch are tough bastards trying to chew off opponents’ feet. That’s soccer ultrabadness for you!

@JNOV: @FlyingChainSaw: When they start playing soccer with the heads of opponents who lost in the qualifiers, then maybe Americans will pay attention (and play better). Think of it: Xe Sponsors This Moment of Cannibal Anarchy Sport!

@Nabisco: Soccer needs ritual beheadings and lesbian cheering squads. Otherwise it will never attract the attention of the gridiron crowd.

Lefty, it’s a mitzvah what you’ve posted here, and thanks for the alt-text shout-out.

@Dodgerblue: Once again I missed out on the alt-text. Thank you for reminding me, and yes, you don’t want to overexpose nipples for fear of desensitization.

ADD: You know, like kids get desensitized to violence by playing violent video games, natch.

More Fun with alt-text: Yes to the ears and to the two guyz one chick…(or dude, you know).

What the hell is with the eyebrows?

@Benedick: This, this or this?

@JNOV: I’m always snarking in the alt-text in my posts. Half the time I spend more time and effort working on the alt-text than the actual substantive content. The alt-text on the two hotties was a nod to Springsteen, wasn’t even thinking of threesomes when I posted it.

@Dodgerblue: The Dutch fan’s alt-text just wrote itself, however.

@SanFranLefty: wasn’t even thinking of threesomes when I posted it.

Neither was I when I read it…

@SanFranLefty: Yeah, that’s some rackage that a guy could rub his face in in times of stress, making motorboat sounds etc. I’m sure she’s quite intelligent too, reads NYROB and the like.

@Dodgerblue: If she’s like every other person from Holland who I’ve ever met, she probably speaks five languages.

@SanFranLefty: Seems like a well-played game so far. I’m at univision.com.

ESPN radio is about 20 seconds ahead of the Univision feed.

– from the fan live blog at univision

there can never be too much waxing.

@redmanlaw: The World Cup feed here in not-Tibet suspiciously switched over to the Tour, which I am not complaining about. I need to sleep, and those European roads are sooooooo relaxing.

@Nabisco: Can you get espnradio.com Over There? It’s very well called. Even I can understand what the hell is going on.

@redmanlaw: Yeah, the commenters on Univision’s website are pretty crazy.

@redmanlaw: We’ll have to see what Twitter can manage tonight.

@SanFranLefty: Plus the trash talk in the side panel.

@Dodgerblue: I finally realized you could set the side comments on Univision to only be your friends.

@Dodgerblue: That means you have another day of Sara Pastasauce to look at…