“Conservatives are trying so hard to highlight controversies, no matter how trivial, we have forgotten the basics of reporting: W5 + H as I learned in grade school, also known as who, what, where, when, why, and how… We need to establish a baseline for integrity in reporting that then allows us to highlight the truly outrageous.” —Erick Erickson, pleading for reality-based wingnut journalism. [RedState]

Daily Currant Joins Forces with The Onion and Christwire…

“CORRECTION: An earlier version of this post incorrectly reported that Sarah Palin had signed on as a contributor to the Al Jazeera America news network. The blogger cited a report on the Daily Currant Web site as the basis for that information without realizing that the piece was satirical.” [WaPo]

Should have posted this yesterday, but it still means something: 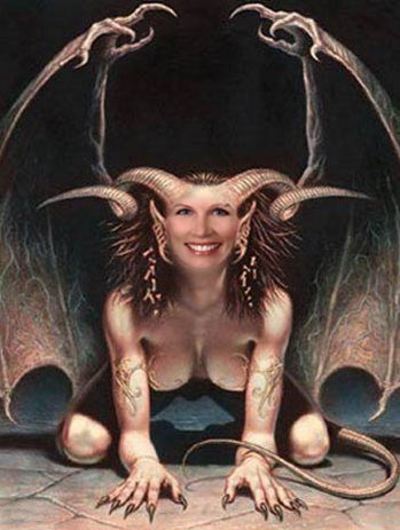 Barkingly insane, facebiting fucktard Michele Bachmann (R-Cookoo’s Nest) went on Fox News to howl commands to the GOP methhead militia to attack Congress tomorrow in order to ensure that health insurance rates continue to increase by 20% per quarter and that Americans can experience the joy of having their coverage canceled after decades of premium-paying for belching loudly after a meal. Ha. Haha. Hahahahahahahahaha.

Psychobitch Bachmann announced the brownshirt assault she is planning for tomorrow on the Gretchen Carlson festival of hate and rage today on Fox News. The twisted Congresswench from Minnesota stared at the camera with quivering eyes and her demented grin and commanded her shock troops to storm legislators’ offices at High Noon tomorrow, “look at the whites of their eyes of their members of Congress and say, don’t you remember? I told you don’t take away my health care!’.”

END_OF_DOCUMENT_TOKEN_TO_BE_REPLACED

Yes, You Heard That Right

Everybody’s favorite op-ed scold, Nicholas “PAY ATTENTION TO AFRICA YOU HEARTLESS BASTARDS” Kristof, wrote today with respect to remaking the Department of Agriculture into a more consumer/small-farm friendly outfit than it is now, without so much influence from Big Corn et al.  A worthy topic — which, of course, turns into his usual vigorous defense of how wonderful he is. (Did you know, for instance, that he grew up on a farm in Oregon? And gives to charities? Wow!)

But there was this:

No. This is too good. THIS MUST HAPPEN. What on earth would the Department’s official seal look like? A close-up of a guy preparing to chomp into a turkey leg, surrounded by thirteen stars? And I’ve always been clamoring for the naming of an Undersecretary of BBQ Best Practices, which would be the best government position ever created.