“A Chicago jury has found former Illinois Gov. Rod Blagojevich guilty of 17 of the 20 charges in his corruption trial. Blagojevich was found not guilty on one of the counts, and the jury deadlocked on two.” [TPM]

“A federal jury today convicted former Gov. Rod Blagojevich of one count against him: lying to the FBI. The jury was deadlocked on the other 23 counts against the former governor, and all four counts against his brother.” [Chicago Tribune]

If Only We Had Ringtones During Watergate…

“I’ve got this thing and it’s (expletive) golden. And I’m just not giving it up for (expletive) nothing.” Get this and other Blago Greatest Shits as convenient new ringtones! Or just wait until someone else creates non-bleeped versions. [State Journal-Register, via Political Wire]

MSNBC Will Yank Your Web Ads With That Kind of Language…

Blago on tape, considering taking Obama’s Senate seat himself: “Now is the time to put my fucking children and my wife first for a change… I fucking busted my ass … I gave your fucking baby health care… What do I get for that? Only 13 percent of you think I’m doing a good job, so fuck all of you.” [Chicago Sun-Times, via Political Wire]

Everybody Gets a Senate Seat!… 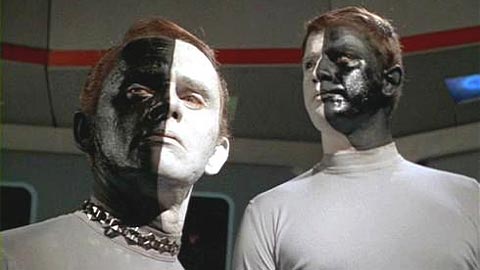 It’s a beautiful day in the neighborhood…

“It’s such a cynical business, and most of the people in the business are full of shit and phonies, but I was real, man — and am real. This guy, he was catapulted in on hope and change, what we hope the guy is. What the fuck? Everything he’s saying’s on the teleprompter. I’m blacker than Barack Obama. I shined shoes. I grew up in a five-room apartment. My father had a little laundromat in a black community not far from where we lived. I saw it all growing up.”

For the record, Barack Obama is half-blacker than Rod Blagojevich, but only half as black as Bill Clinton.

The rumors are true:

Former Illinois Gov. Rod Blagojevich will be among 14 contestants on the new season of “The Celebrity Apprentice.”