Stinque
Home Latest Comments Log in
If it smells, we’re on it.
Stinque
Mastodon: @stinque@mas.to
A Special Place In Hell, Big Shitpile, Parties We Missed 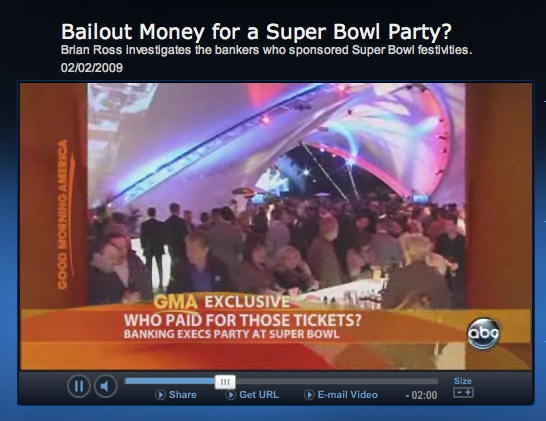 Bank of America is one of those institutions that can only exist in a fascist dystopia ruled by savagedly fuckwitted gangsters, a bank so criminally incompetent that its very size and raging degeneracy now threatens the larger national economy.

It entered the naughts a huge, mostly West-coast bank, known for the cackling imbecility of its employees and the rapaciousness of its fee schemes that force its banking customers to pay horrific charges for services that were free 20 years ago. In short, Bank of America was the equivalent of a really stupid biker gang of a bank, dangerous if you got near it but mostly easy to avoid.

It only achieved its apotheosis of demented, insatiable decrepitude during the Bush Administration which had a talent for confusing wanton corruption for free enterprise. After gobbling up other institutions over the years, it attained its current colossal size.  By post-Apocalypse metrics still with a $53 billion market cap, Bank of America is the third largest bank in the states (from a $238 billion cap as of January 1, 2007), giving its executives a sense that maybe the bank is too big for the government to allow it to fail, maybe even too big for any rules at all. It proved that with a massive bacchanalia of Caligulan proportions last week, sponsoring a SuperBowl orgy outside the stadium in Tampa that ran for 5 full days and, according to ABC News, cost around $10 million.

ABC News reported: The event euphamized as “The NFL Experience” was comprised of 850,000 square feet of orgiastic entertainments obscured by the fig leaf of come-ons for the bank’s criminally overpriced, fee-spiked alleged financial products. In reality, the free-for-all was a chance for Bank of America to show its feces-hurling contempt for the American taxpayer who poured some $45 billion into the bank in the past two months to support the lunatic acquisition of Merrill Lynch and bail out the bank’s rancid loans portfolios, the fruit of the bank’s emetogenic underwriting standards.

Stinque.com, due to the website’s humble righteousness and modesty, was not invited but we could easily imagine the scene. Still, in the interest of fairness and accuracy Stinque organized a Remote Viewing Brigade to look in on the debauched proceedings – and this is what we saw:

Enormous bowls of cocaine being passed around among the celebrants; Bank of America commercial customers having sex with midgets in mountains of caviar and eating the flesh of freshly barbequed infants; farm animals dressed in Prada and Manolo Blahnics wandering around being sodomized by bank employees and customers;  gold-covered fried ice cream bon bons being eaten out of the vaginas of $1000 an hour hookers by private banking customers; President Ken Lewis handing out midgets, small pre-teen boys and offering to sodomize commercial banking customers and their pets.

Last week, Morgan Stanley, beneficiary of $10 billion in taxpayer largess, took its clients down to a luxury resort in Palm Beach, FL for days of wanton excess.
Between Christmas and the new year, Sandy Weill, criminal genius behind Citi, took his family down to a $10,000 a night resort in Mexico, you know, just to rest up after taking $350 billion in taxpayer money and hurling 53,000 former taxpayers – his employees – out into the streets to starve to death.

What say you, Stinquers, have any of us witnessed any greater contempt for taxpayer generosity? Has it been misplaced? Should these criminal enterprises be, instead, shut down and their executives sent to the stocks?

Oh, ChainSaw, you stun and mesmerize me with your way with words.

Oh and shoot all of these douche-fucks. Please someone send this to my girlfriend Rachel Maddow and my boyfriend Keiff Oh in hopes that MSM picks this shit up. So fucking wrong.

Man, your writing always gets me all worked up. I need a pitchfork now! Nice use of uuuh.. whatever that second pic is, but it should obviously be called WTFunderwear for serious if some dude came at me wearing those I would a) laugh my ass off, and b) bail.

I need a cigarette after these posts because of the rage-gasm.

@SanFranLefty: Rachel had it tonight.
Rachel has it every night as far as I’m concerned. Heh.

All right it’s only Australian dollars, but our Govt. has gone crazy-ape bonkers, and is giving every taxpayer who earns under $80,000 the useful sum of $950!!

I’m getting free money under the Government’s latest economic stimulus package which is about 13 billion of free money to taxpayers, pensioners, and other worthy types, including parents of school kids (who get a payment per child as well as their own payment) It’s raining money here!!

The whole package is worth about 42 billion, including 6.5 billion dollars on public housing and 15 billion on schools. To steal the headline from a current affairs program here “It’s a carpet bombing of cash”

FREEEEEEE MONEY!! And what’s even better it’s my patriotic duty to spend it!!

@CheapBoy: Here in New Mexico USA, now-disgraced Gov. Bill Richardson called our state legislature into a special session and brow beat them into giving out a $450 million tax rebate. Mrs RML and I got about $50 each. I think she intercepted mine. Anyway . . .

Fast forward to the current session. Budget shortfall. Guess how much? $450 million. Oops.

Could have been worse. He might had had to address the issue in confirmation hearings but pulled out once a “pay for play” scheme emerged and became the subject of a federal grand jury investigation.

BTW – Daschle has to go. He’s been a leader in the Weenie Wing of the Demrat party rolling over for Boosh since 2000, so fuck him. Bring on The Scream.

@SanFranLefty: Yes, indeed. FCS understated and restrained writing style is so effective in it’s ability to illuminate and inform.

@drinkyclown: Obviously that underwear was designed for a even much bigger peen, hence all that baggy at the “toe”.

Incidentally, word is that the Mets new ballyard is getting de-named on account of the whole, you know, financial collapse thing.

FCS, where were you at the moment of HST’s death? Did you feel anything unusual, strange, at that time?

@blogenfreude: See, there’s your proof that they’re cutting back due to the current economic climate. Never say these poor brave souls didn’t sacrifice.

@Prommie: No, his stuff was entertaining and disdainful but if it had never been published there would have been no loss of insight or knowledge about how our society works. In another life, I read a large collection of his works and was struck at how fluffy it all was, disdainful, amusing, but ephemeral. Hells Angels was a useful interrogation of contemporary tribal cultures but after that, the body of work becomes ever more self-indulgent. When I compare the contemporary non-fiction I prize, works by Alfred McCoy, James Bamford and Greg Palast and the reporting of Seymour Hersh, to HST’s confections I just feel sort of embarrassed for the guy.

This started out as a comment, but it got a little long-winded so I put it up on my blog as a post. Enjoy!