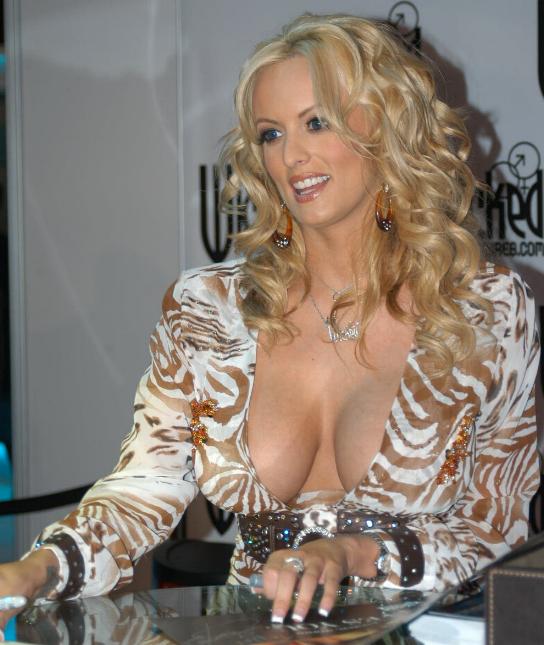 And she just might run for Vitter’s senate seat.

You have to admit – she’s an opponent Vitter can understand.

Imagine the debates. Just close your eyes and imagine.

Could that woman look any more like a blow-up doll? Has anyone checked her for an air nozzle? Prom?

@Tommmcatt Yet Again: Who cares as long as she blows up Vitter’s political career. I am loving this. Somebody call Larry Flynt and his checkbook.

I doubt it will go anywhere, but I hope she actually gets to go to some debates. Just watching Vitter squirm uncomfortably will be enough. Especially if Wendy the vengeful wife wears the same outfit as Stormy.

Eyes on the prize.

@Tommmcatt Yet Again: I’d guess those are real. The fake ones, seems to me, tend to be ride a bit higher. Trust me, I am an expert on boobies. They’re all good, by the way, fake, real, little, big, all good.

Is it Prommie’s birthday or something? Why all the boobage all of a sudden?

@Jamie Sommers: I think all the headlights are in honor of Candlemas. We should be in the clear by tomorrow.

@Prommie: Those are SO not real boobies. They are perfectly round circles.

@ManchuCandidate: Would love it if Wendy and Stormy had matching outfits. Is Senator Shitter an ex-client of Stormy’s?

Demand full disclosure on where those beads have been.

Omigawd I am so excited!

(Um…hi. I was around occasionally back on CP and just registered here so I could comment on this post. I am not as dedicated as all of you and don’t always keep up with the group discussions, but I do read all the posts.)

Anyway, the repressed Baptists around where I live are precisely the Republican voters that they’re hoping to turn away from Vitter with this move. I look forward to their heads exploding one by one. Also, must get me some of those beads, preferably before the local “family-friendly” Mardi Gras Pet Parade this weekend.

Re: Finette. I guess someone can pour this poor soul a drink and offer a seat at the bar. More salty snacks, please.

@SanFranLefty:
Stormy doesn’t look like Wendy. So the answer is no.

Be careful, commenting on this site is like heroin…sweet, sweet heroin.

Also: Nice to hear your voice, even if you only speak up now and again….

I bet there are pictures if you pay enough….

@SanFranLefty: too symmetrical and too far from each other to be real.

@blogenfreude: She inflated her life vest before leaving the plane.

FTR, I think they’re fake: too much space between them.

Didn’t the Kingfisher see his popularity go up as a result of an association with a stripper? If David Duke can be taken seriously and Shitter Vitter can hold on to his seat (heh heh) in Louisiana, do not underestimate a candidate who can attract headlines such as “Stormy threatens to blow Vitter…away”

TJ: Wait — the Chinese are sending their money out of the country? How can their government keep buying our T-bills? From today’s NYT:

Some Chinese are so eager to turn their yuan into other assets that when an online real estate brokerage organized a tour of foreclosure auctions in the United States, it received so many applications that it had to turn away nearly 400 people.

In Shanghai, cash-rich Chinese companies are buying high-yield bonds issued by distressed American companies at a time when most investors are steering clear of bonds even from solid companies.

All over the world, Chinese companies are sending home fewer of the billions of dollars they earn from exports.

And in Hong Kong, wealthy mainlanders are turning up at jewelry stores in growing numbers seeking diamonds, big ones.

@Dodgerblue: Maybe thats why their government invests in our debt, huh? Hmm, is it possible, its not because they want to have leverage as our largest creditor (ahich they are not anyway, just a huge one) but because despite all, in the middle of an economic shitstorm, even as we stare cannibal anrchy in the face, they trust our currency more than their own? Wow, that blows my mind, hundreds of thousands of libtards, totally wrong about international economics.

@JNOV: But can that separation not be a matter of clothing? Most women who want to display their decollatage without looking like a prostitute, they leave only a narrow slot for viewing, and the clothing pushes them together, is this not true? What rings true for me is that those boobs are hanging down and resting on her chest, if you are gonna get a boob job, they will usually hoist them up, too, so they stand up their like magical gravity-defying melons.

I must say, I have never had an encounter with fake boobies, and its hard for me to believe that any fakes would feel real when palpated.

I came to love boobs very late in life, for most of my years, it was all about the badonk.

1) The Chinese stock market is down like 72%–compared to the US down 38%ish, which suddenly doesn’t look so bad. The Chinese are relatively new to investing, and the “casino mentality” is even more pronounced there.

and 2) It really doesn’t matter. The Obama Administration–wow does it feel weird to type that–is putting the printing presses on full speed regardless if anyone’s buying debt to prop up our fiat currency. The danger of course, is that we may avoid prolonged deflation, but instead trigger a wave of hyperinflation that wipes out existing US dollars. We’ll know the effects by this time next year if for example, a gallon of milk is $43,000.

Take the test, lets compare scores; we could do some real sociological research here, who will do better, men or women, gays or straights? This is fascinating. And its an excuse to look at boobs with a legitimate, if implausible, rationalization.

Come on, lets do this, lets see who scores best.

Some of them are pretty obvious, but a few were tough and I had to guess. One can only tell if they are real or Memorex by the, er, feel test. Fake boobs have a very unnatural seam that you can detect when you touch the underside of the breast.

@Promnight: I have been in the presence of very good fakes, and bad ones as well. A girlfriend once threatened to get them, and I talked her out of it.

@ManchuCandidate: Same score I got, I thought it respectable, but did you notice that it gave you your percentile rank? 17 out of 20, it told me, was 35th percentile, thats piss poor.

@Promnight:
Yeah, what the fuck?

@Promnight:
I got 18 out of 20. I don’t know whether I should be appalled or impressed by my skills.

@SanFranLefty: Impressed. I sure am.

Who cares, it was simply the most pleasant and enjoyable test I have ever taken in my life, and isn’t that something? I have always liked tests, I liked the SATs, I enjoyed the Bar Exam, but this, of all the tests I have taken, was the most enjoyable and pleasant test ever.

19 out of 20. I say women are better at this. You boys get too distracted by the fact of seeing boobs to concentrate properly.

@Mistress Cynica: Egg-fuckin’-zactly, sister! I view the photos as if I were viewing some National Geographic documentary – no titillation (so to speak), just pure anatomic analysis at work. And I bow down to you. Which one threw you off?

@SanFranLefty: Me, too. High five! I don’t know which ones I got wrong, and will not be going back to find out.

@mellbell: Nor shall I go back. I think I got the third or fourth one wrong, but I am soooo not going to double check. That slideshow was enough to make me heterosexual for life.

@SanFranLefty: @Mistress Cynica: @mellbell: 19 out of 20. Not sure what that says, although I have always appreciated boobies.

@homofascist: I think it proves our point that one is more observant when one isn’t even remotely sexually interested.

10/20 aka no better than chance. Clearly, I don’t know nuthin’ ’bout no breasteses. In fact, I think that quiz may be the longest time I’ve ever looked at ’em.

@SanFranLefty: 18 of 20. Tied with Lefty, one lower than Cyn and the Generalissimo. It’s the eye.

Old Steve Martin line about watching a Las Vegas show: “Look at all those tits! There must be 57 tits up there!”

Please, no more cheat sheets on the answers. This is a test I’d like to take when I’m outside the safety of surfcontrol. I have great confidence in my ability to focus, focus, focus.

Hey, take a look at these Ipod speakers: http://www.shinyshiny.tv/2009/02/ipod_speakers_f.html

@Prommie: Hmm. I’m thinking two scroll wheels, one for balance, one for volume.

I would just like to throw a cog into the sexually-disinterested females do the best meme by confessing that I only got 10/20. Pathetic. But I’m not a very observant person in general, so I guess there’s no reason to think that wouldn’t extend to bewbies as well. Really, my only thought while taking the test was when in the hell did all the areolas get as big as dinner platters? Aren’t they supposed to take up a smaller proportion of the total boobage?

@flippin eck: I noticed the areola thing at about 25. I guess there was some kind of mutation that spread around the world in 1987, suddenly there were big, pale areolas everywhere I looked. Before that, every nipple I ever saw was this hard, pink little thing about the size of a quarter, max.

Just to change the topic, check out these basset hound puppies: http://www.zetube.com/files/photos/d3d9446802a4425L.jpg

@flippin eck: I think living in proximity to Dallas–silicone capital after Hell Lay–may have honed my instincts. Also, I was really good friends with a stripper (hers were real and amazing) who could spot a fake at 100 yds. I have to say, the slide show with the mutant nipples did make me feel better about my girls.
@Prommie: I will never forgive you for that. I was expecting actual cute puppeeez, instead I now need mind bleach.

I just don’t understand how the fake ones are so hard to spot for some of you. They are SCARY looking!!! They are too taut and too round and just so unnatural looking. Plus most of them look as though the nipple is going to pop off (like one of the buttons on the shirt of our high school’s fat Spanish teacher) and hit you in the eye.

Although I am totally curious about whether people generally erred on the side of fake ones being real or real ones being fake.

@homofascist: The ones that looked too perfect I marked Fake. Gravity-prone examples got a pass.