Just another day in BP’s world:

Dr. Brian Stacey of the National Oceanic and Atmospheric Administration told NPR last week that, although there are five different species of sea turtle in the Gulf of Mexico, the majority of the ones found affected by the oil spill are Kemp’s Ridleys, “the rarest of them all.”

Mike Michael at Gather.com reports that Kemp’s Ridleys are listed as endangered under the Endangered Species Act. Harming or killing one “carries stiff fines and civil penalties ($500-$25,000) assessed for each violation. Criminal penalties include possible prison time and fines from $25,000-$50,000.”

END_OF_DOCUMENT_TOKEN_TO_BE_REPLACED

Are You There, God? It’s Us, Humanity. Sorry We Fucked Up Your Creation.

Forgive Us, BP, For We Have Sinned 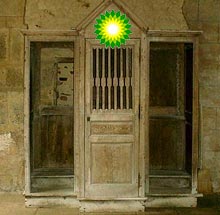 Time was when Republicans would criticize the President for kowtowing to foreign heads of state. Now we’re learning that the problem wasn’t the action, but the recipient:

Barton condemned the White House’s handling of a meeting Wednesday with BP officials, in which President Barack Obama pushed the company to create a $20 billion escrow account for damage claims from the Gulf of Mexico oil spill. The congressman called the account a “slush fund.”…

“I am ashamed of what happened at the White House yesterday,” said Barton, the top Republican on the [House Energy and Commerce] committee. “It is a tragedy in the first proportion that a private corporation can be subjected to what I would characterize as a shakedown — in this case a $20 billion shakedown.”

Other genuflectors lining up at BP’s confessional include Michele Bachmann, Haley Barbour, the wingnut “Republican Study Committee”, Rush Limbaugh, and Sean Hannity. We’re not sure how the spin works on this one, but we imagine it requires a lot of grease.

Grease is the Word 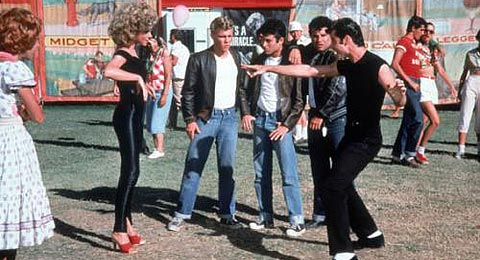 How cool would it be if five minutes in, the camera pulls back, the staff pours in from the Secret Door, and we’re treated to a production number?

Short of that, how bad are we for planting “You’re the One That I Want” in your head for a dream revival at 2 a.m.?

Well, if we haven’t already ruined your evening, stick around for our Obama speech Open Thread/Brylcreem Sale. A little dab will do ya on those hot Summer Nights.

“‘I think the people responsible in the oil spill — BP and the federal government — should take full responsibility for what’s happening there,’ Boehner said at his weekly press conference this morning.” Meaning: We pay for it, too. [TPM]