The Taste of a New Degeneration 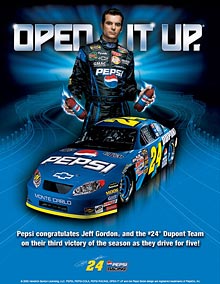 On a day when Glenn Beck has lost another 19 advertisers, a leading dispenser of high-fructose corn syrup is under attack from the other direction for being too fabulous:

A group that advocates “traditional family values” claims it has the signatures of 500,000 people who have pledged to boycott Pepsi over what is says are the company’s activities promoting gay rights.

The American Family Association, which boasts “2.5 million online supporters,” “asked PepsiCo to be neutral in the culture war and not support the homosexual agenda,” it said in a press release Tuesday. “PepsiCo refused. The company continues to give financial support to homosexual organizations.”

That would presumably include $500,000 to the Human Rights Campaign — but not Pepsi’s totally gay NASCAR sponsorship. You know what they say during pit stops: So much lube, so little time.

500,000 to boycott Pepsi over its ‘homosexual advocacy’ [Raw Story]

Birther of the Day

Sen. Jim DeMint (R-SC) stands by his comment that health care will be President Obama’s Waterloo, a comment Obama derided in a health care speech yesterday.

“I think he played right into my hands,” DeMint told Neil Cavuto on Fox News this afternoon, adding that Obama’s frequent appearances over the last several days show a level of desperation. “Any time the president of the United States goes after a freshman senator, he’s losing his grip a little bit.”

He insisted his comments weren’t about politics, but renewed his call to block the president’s reform attempts.

“We’ve gotta stop him. We cannot let him roll over us,” DeMint said.

BWAHAHAHAHAHAHA! I’m a senator with a very cunning plan!

Feingold or Saunders should put sick South Carolinians in the gallery, point out that they don’t have health insurance, and make the useless little fuck squirm.

Why does South Carolina continue to punish us?

Hillary and Doug and Hitler, Too!

Psychopathic Jesunazi Douglas Coe, as leader of the dominionist parachurch cult, The Family, is a mentor to all manner of reactionary monsters in the Congress, including the recent crowd of GOP sex maniacs who’ve spooged the headlines with their insane, relentless pursuit of illicit, extra-marital poon-tang – and his most notorious spiritual protege, Hillary ‘Swampsow’ Clinton, the insane, ineffectual Secretary of State and perpetual candidate for everything everywhere.

END_OF_DOCUMENT_TOKEN_TO_BE_REPLACED

I’m guessing that Doug Coe is the passenger in this photo, but my Norwegian sucks.

Doug Coe, the group’s spiritual leader, once preached that the willingness to behead one’s own mother was a “covenant” tantamount to what “Jesus said.” The organization “Youth with a Mission” owns the C Street boarding house, which is registered tax-exempt as a church, advocates seizing the “mountain of government” as part of an evangelical crusade to advance the “kingdom of God.” Coe, who holds misogynist beliefs, once counseled a lawmaker that his wife — who complained of not being sexually satisfied — might be possessed by demons.

END_OF_DOCUMENT_TOKEN_TO_BE_REPLACED

How dare they. Fuck these people. Practice your religion if you must – pray all you want to the invisible man in the sky, but keep it to yourself. Fucking professional Christians. Enough.

These people are fucking dangerous. The rocks they live under must be lifted. Sunlight needs to shine into the C Street house. We need to know everyone involved so they can be named, shamed, and driven from polite society.