Stinque
Home Latest Comments Log in
If it smells, we’re on it.
Stinque
Mastodon: @stinque@mas.to
Orange Alert
A Thought At Bedtime, Orange Alert 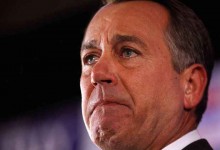 Tomorrow, as Nancy Pelosi hands off the gavel to John Boehner, Agent Orange will give a speech outlining what he intends to do with the next two years.  We all know what he’s going to say, sort of.  But the big question is…

AT WHAT POINT WILL HE LOSE CONTROL OF HIMSELF AND START WEEPING?

Rules are simple.  When the handoff happens, invariably there will be a standing ovation.  As soon as that standing-o stops and he starts flapping his gums, the clock starts.  “Weeping” defined as (a) actual tears or (b) unplanned stoppage in speech for more than two seconds as he tries to collect himself COMBINED WITH acts incidental to weeping (deep breath, sniffling, etc.).

Put your predictions — quoted in minutes and seconds — in the comments.  The Price Is Right scoring rules are in effect: closest to the actual weeping time, without going over, will win.  (Addendum: taking a competitor’s time and adding one second would be frowned upon, yet be totes hilarious at the same time.)  Example:

(No actual prizes, of course.  So there.)

As I will be judging, I will throw out an obviously wrong answer and declare that he gets through the speech without shedding a single tear.  Not even so much as a manly sniffle.  The rest of you: put some real responses in there.  Bonne chance!

I Don’t Know If I’m Ready For This 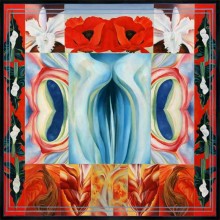 So we are one month away from the handover of the House.  And the reality is starting to hit home.  Seems that the Smithsonian — those rabble-rousing anarchists — have decided to put up a special exhibition on portraits of homosexuals.

There are some very famous artists represented in the show: Andy Warhol, Walt Whitman and Jasper Johns, among many others. But the work that so far has been the most controversial is a provocative video from 1987 by the late artist David Wojnarowicz called A Fire In My Belly.

Martin Sullivan, director of the Smithsonian’s National Portrait Gallery, says the artist created the piece as a response to the “agony and suffering” of his partner who at the time was dying of AIDS. Using “vivid colors, and some fairly grotesque scenes, it’s more a meditation on the fragility of the human flesh,” Sullivan says.

At least one critic has accused the Smithsonian of caving in to pressure from Catholics and from two Republican members of Congress. Representative Eric Cantor of Virginia called the exhibition “an outrageous use of taxpayer money.” A spokesperson for incoming House Speaker John Boehner told The Hill newspaper that “Smithsonian officials should either acknowledge the mistake or be prepared to face tough scrutiny beginning in January.”

And thus we see the value of having Democrats in power.  With Dems in power, the GOP merely gets two-thirds of what it wants. The good news is that the truly wingnutty stuff is pushed to the side.  But when the GOP gets the keys?

Point: the first two weeks of January are going to see toxic levels of crazy.  Hang onto your asses, everyone!  (Just not too suggestively, thanks.)