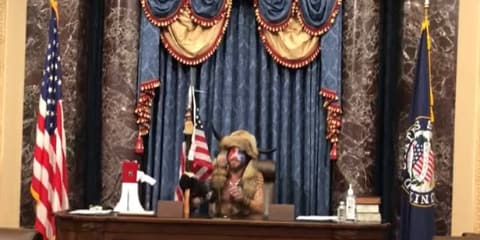 Our guest columnists stand united against the citizens of a free republic.

WHEREAS, The primary mission of the Republican Party is to elect Republicans who support the United States Constitution and share our values;

END_OF_DOCUMENT_TOKEN_TO_BE_REPLACED

The Crossdresser and The King

J. Edgar Hoover, who was smashing gender norms before it was cool, had his panties in a bunch about Martin Luther King Jr. MLK had a suspicious proclivity to exercise his First Amendment rights, which, if allowed to spread, might undermine the Republic by forcing it to live up to its ideals.

So Hoover did what Americans expect an FBI chief to do: He drove a Ford spied on a United States citizen:

Under the FBI’s domestic counterintelligence program (COINTELPRO) King was subjected to various kinds of FBI surveillance that produced alleged evidence of extramarital affairs, though no evidence of Communist influence.

What kinds of surveillance? Well, for starters, how about this:

(Readers of a Certain Age may only remember Bobby Kennedy as a Sainted Martyr. But he was also Brother Jack’s attack dog as attorney general, and before that, a rabid anti-Communist working for Joe McCarthy. History is fun!)

END_OF_DOCUMENT_TOKEN_TO_BE_REPLACED

This is new to us. We feel compelled to express this fact, since Adam West remains our Batman, where by our we mean Wednesdays and Thursdays same-bat-time-same-bat-channel, and we would presume that our inner seven-year-old wouldn’t forget something like that nearly a half-century on.

Unless it came out during the third season, which we’ve mostly sublimated because (a) no cliffhangers, and (b) the Batgirl theme is really stupid. In that context, a pro-Vietnam message would have been the least of our concerns.

The first thing we did upon learning that WaPo’s Dana Milbank had written a column advocating the Draft was look up (a) his age, and (b) his military service.

Having grown up during That Decade, you can understand why. Our babysitter had a Vietnam map on her livingroom wall, tracking the Last Known Locations of her son, the draftee Army cook. We checked our Number every year, even though we weren’t even a teenager. We gave Serious Thought to Canada, at least as serious as a twelve-year-old could muster.

And then it all went away, and Our Generation gave the world Toga Parties.

But despite the fact we dodged the Draft — even dodged Registration, since Jimmy didn’t dare piss off young voters with it in 1980 — we’ve never forgotten that sword hanging over our head growing up, our status as a potential pawn in Somebody Else’s War. Whatever the Draft’s justification in earlier eras, it didn’t apply to ours.

END_OF_DOCUMENT_TOKEN_TO_BE_REPLACED

Please Note (a) They Have to Be Told, and (b) They Don’t Listen

Hurricane? But What About My Campaign?…

Today, we celebrate those who have taken a risk, worked hard, built a business and earned their own success.