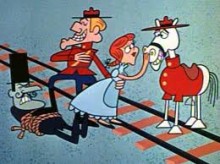 Good Lord.  There was enough drama with the Canadian Election as it was.  (This drama, naturally, was wholly unexpected.  It’s Canada, for Christ’s sake.)

Jack Layton, for the NDP (Team Orange in your programs, what the Democrats would look like if they were actually uniformly progressive) is actually set for a big breakthrough.  Given the fact that he comes across as actually not being a total douchebag, and that Liberal leader Michael Ignatieff (Team Red) actually has managed to be more boring than Al Gore, and that Quebec is sick of voting for federal politicians that want to end Canada (that’d be the Bloc Quebecois, Team Light Blue), Layton might actually form the second largest party and — if Fatboy and the Conservatives (Team Labatt’s Blue)  are held to a minority win (still the most likely outcome) — might actually become Prime Minister himself.

And then Osama got a cap or twenty in his ass.  This might give the Conservatives a bunch of juice, and not a moment too soon.  Canada’s involvement in last night’s thing was nil, but they have been putting a lot of time, treasure, and blood into Afghanistan.  Harper — in the course of reading Dubya’s playbook — has doubled-down on the war.  And Layton was campaigning, hard, on pulling out.

And so, a rarity: an election night where absolutely nobody knows what the fuck is going to happen.  Coverage on a C-SPAN network (C-SPAN2, I think, starting soonish), along with this open thread for your Canucking pleasure.

Well, What Do You Expect, They’re Canadians…

Do we care? “The second minority government of Stephen Harper has fallen. Early Friday afternoon, 156 opposition MPs — all of the Liberals, New Democrats and Bloquistes present in the House of Commons — rose to support a motion of no-confidence.” Actually, we don’t. [Toronto Globe and Mail]

It’s not quite in the category of moving pyramids or shading OJ — or even using stock photography to misrepresent your supporters — but using an artfully combined collage of actual crowd shots can still land you in hot water:

Andrew Romanoff, a Democratic candidate for U.S. Senate from Colorado, apologized Friday for a photograph on his web site that was altered to show an African-American woman standing next to the candidate. Romanoff also removed the photo…

“I take offense at any suggestion that our campaign attempted to deceive anyone. That’s outrageous and false,” he said.

The second-annual “Frozen Gore” ice sculpture debuts in Fairbanks, Alaska. The smoke is created from the exhaust of a Ford F-350 behind the ice, which the sponsors say creates fewer emissions than the Lear jet Gore flew to Copenhagen. (Gore flew commercial.) The sculpture is on display at Thrifty Liquor on Airport Way.

Alaska’s average temperature has increased about 4 degrees Fahrenheit in fifty years, compared to 1 degree for the world at large. 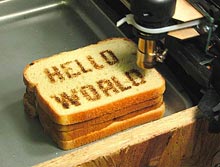 In case you haven’t been following The Great Global-Warming Scandal, well, that’s because you don’t read the right blogs. We actually have been following it, just not in public, since anything that has wingnuts that riled up must be less than it appears, and we’d rather wait for someone else to do the heavy lifting.

And who better to step onto the mat than scrawny Nate Silver?

Apparently, the networks of University of East Anglia’s Climate Research Unit were hacked into last night. Approximately 160 megabytes of files, containing hundreds or thousands of e-mails and documents were leaked as a result of the security breach, reports The Guardian.

See, right there, we’re just not going to deal with 160 megs of materials — the House healthcare bill weighs in at a mere 3.4 megs, and we can barely suffer a page of that.

But Nate, God bless him, fishes out the one item that everyone’s waving like a snake flag — a 1999 email from the CRU’s director to his Evil Minions:

END_OF_DOCUMENT_TOKEN_TO_BE_REPLACED

Later, Ron and Grapes* will talk about how Ken Dryden was not that great a goalie, and why Gilles Duceppe is a pussy for wearing a visor.  But first: Doug, go!