This samizdat video was posted Wednesday by “NHLiberty4Paul”, a new YouTube account apparently not formally associated with the Ron Paul campaign — and not, to be clear, necessarily a Dr. Evol supporter. Near as we can tell, the video conclusively proves that speaking a foreign language immediately disqualifies you from American politics. 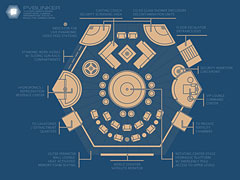 A San Fernando Valley adult entertainment studio began construction this month on what it calls a “post-apocalyptic” underground bunker in anticipation of a global catastrophe rumored to take place in late 2012.

And a few of the (real) details you can’t read in this reduced graphic:

END_OF_DOCUMENT_TOKEN_TO_BE_REPLACED

As Osama bin Laden watched his terrorist organization get picked apart, he lamented in his final writings that al-Qaida was suffering from a marketing problem. His group was killing too many Muslims and that was bad for business. The West was winning the public relations fight. All his old comrades were dead and he barely knew their replacements.

Faced with these challenges, bin Laden, who hated the United States and decried capitalism, considered a most American of business strategies. Like Blackwater, ValuJet and Philip Morris, perhaps what al-Qaida really needed was a fresh start under a new name.

In case you’re wondering why AirTran Airways (née ValuJet) is on the clever AP writer’s mind, we invite you to revisit ValuJet Flight 592.

Terror by any other name: Osama eyed name change [AP]

A Cure for What Ailes Ya

After the publishing powerhouse Judith Regan was fired by HarperCollins in 2006, she claimed that a senior executive at its parent company, News Corporation, had encouraged her to lie two years earlier to federal investigators who were vetting Bernard B. Kerik for the job of homeland security secretary…

Now, court documents filed in a lawsuit make clear whom Ms. Regan was accusing of urging her to lie: Roger E. Ailes, the powerful chairman of Fox News and a longtime friend of Mr. Giuliani.

And what was the purported lie? Denying that “Ms. Regan had once been involved in an affair with Mr. Kerik.”

So, other than needing a strong dose of mind bleach, what’s the problem here?

END_OF_DOCUMENT_TOKEN_TO_BE_REPLACED

Why is Jonah Goldberg Still Alive?

Jonah Goldberg is an editor-at-large of National Review Online and a visiting fellow at the American Enterprise Institute. In these excerpts from today’s syndicated column, Mr. Goldberg imagines the murder of a political opponent.

END_OF_DOCUMENT_TOKEN_TO_BE_REPLACED

Are you of the Asian Persuasion, and would like to earn some extra cash? Citizens Against Government Waste is hiring!

“Latinos for Reform” had planned to pay Univision $80,000 to run this ad (it’s also in Spanish) advising Nevada Hispanics that the best way to exercise their franchise is to stay en la casa on Election Day. Latinos for Reform may or may not be funded by — surprise! — the Swift Boat folks.

In the event, Univision said no gracias. But really, if they want to help Sharron Angle, shouldn’t the ads have been in Chinese?