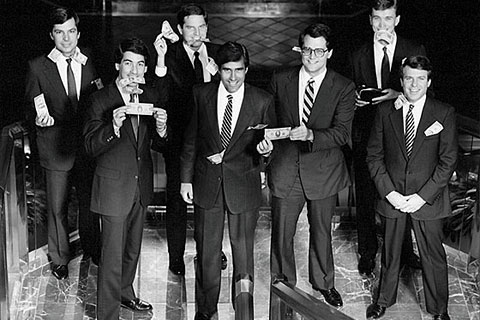 “Oh, that was a moment of humor as we had just done what we thought was impossible. We had raised $37 million from other people and institutions who entrusted us with their funds, and we thought it was a miracle that our group had been able to be so successful in fundraising.”

—Mitt Romney, explaining how stuffing your suits and mouths with dollars is an innocently jolly way to commemorate a financial achievement.

The Only Urban Dictionary That Matters

John Dingell is the longest currently-serving member of Congress (and the third longest-serving ever). The acerbic 85-year-old Michigan Democrat had long been contemptuous of Tea Partiers. He found them unruly and difficult to get along with. Dingell tended to refer to them as “tea baggers,” a phrase that has an alternate sexual meaning. This normally wouldn’t have been a problem in the hall of Congress, but when Dingell was booked to appear on The Daily Show with Jon Stewart, his staff felt the need to finally warn and educate him. When his chief of staff shared the other meaning of “tea bagger” with Dingell, the Congressman went through three different stages of reaction. At first, he said “hah,” then said “that’s disgusting,” and finally the octogenarian congressman reached the plain of acceptance and said, “It’s funny and I’m going to keep using it.”

9 Revelations From Robert Draper’s ‘Do Not Ask What Good We Do’ [Daily Beast, via Political Wire]

A Tennessee Guide to Government-Approved Fucking

Our guest columnist is Jim Gotto, Republican in the Tennessee House of Representatives. A local news story says that under his bill, “holding hands and kissing could be considered gateways to sex.”

Tennessee Code Annotated, Title 49, Chapter 6, Part 13, is amended by the part in its entirety and by substituting instead the following:

As used in this part, unless the context otherwise requires:

(1) “Abstinence” means not participating in any activity that puts an individual at risk for pregnancy or a sexually transmitted disease;

(B) Abstinence-centered education is a holistic approach that addresses the physical, social, emotional, psychological, economic and educational consequences of non-marital sexual activity;

END_OF_DOCUMENT_TOKEN_TO_BE_REPLACED

Onward and Upward with the Arts of Seduction 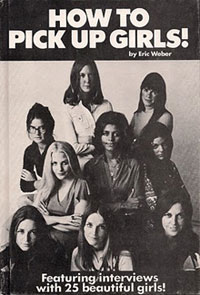 “Women, you increase your odds of keeping your men by being faithful, a lady in the living room and a whore in the bedroom.” —Phil Mitsch, New Jersey state senate candidate, tweeting on September 2.

“That’s a great tip… That shows the utmost respect for women… What I was trying to say to men was, ‘Men, look, if you got to go out and play around and you can’t be honest with a woman and respect her, then you’re better off just doing pay, play, and get the ‘f’ away.'” —Phil Mitsch, Wednesday.

“I am definitely not apologizing for those two tweets at all. They were relationship tips. ‘Stud in the bedroom’ and ‘whore in the bedroom,’ those are timeworn adages.” —Phil Mitsch, Thursday morning.

“I tweeted my version as a useful piece of advice to both men and women in order to increase their odds for having healthy, successful and long-term relationships. I never meant this tip to offend anyone. I have the utmost respect for all women, and, win or lose, this quote won’t be used again by me in any form.” —Phil Mitsch, apologizing Thursday night.

Self-Hagiography Will Make You Go Blind

We understand that political ads are onanistic by nature, but dayum, Cantor must have cramped his wrist on this one.

Our guest columnist is California State Senator Leland Yee, writing in the form of a press release. Asterisks have been replaced in the interest of full transparency.

The controversy surrounding an upcoming Sarah Palin event at California State University Stanislaus and calls for greater transparency from Senator Leland Yee (D-San Francisco) has spurred several racist and homophobic phone calls to Yee’s office and even a fax threatening the Senator’s life.

An expletive-laden fax received yesterday in the Senator’s San Francisco and Sacramento offices says, “To: JoBama Rectum Sniffer Fish Head Leland Yee” and then in all capital letters, “WERE YOU TO EXTRACT YOUR HEAD FROM TREASONOUS MARXIST NIGGER HUSSEIN OBAMA’S RECTUM, YOUR BRAIN WOULD STILL FUNCTION AT ITS PRESENT MUCH DIMINISHED LEVEL BUT AT LEAST THE NIGGER SHIT SMELL WOULD EVENTUALLY DISSIPATE.”

END_OF_DOCUMENT_TOKEN_TO_BE_REPLACED

Peel Me a Grape…

“A district attorney is telling Juneau County [Wisconsin] schools to abandon their sex education courses, saying a new curriculum law could lead to criminal charges against teachers for contributing to the delinquency of minors.” [Milwaukee Journal Sentinel, via TPM]