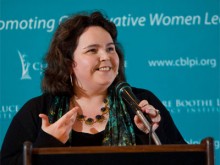 NRO is a site littered with some of the worst writers in the conservative movement. Jonah Goldberg is the spawn of a genuinely horrible GOP activist. New addition and racist in residence David Yerushalmi is controversial even among the other bigots that make up the wingnut-o-sphere. But Kathryn Jean Lopez, K-Lo to those who keep up with this sort of thing, is just plain dumb. Pareene:

It is quite hard to take her seriously enough to actually criticize her as a thinker or writer or editor, which makes it all the weirder that anyone named her editor of anything. She doesn’t inspire the hatred someone like Maggie Gallagher inspires, because with Maggie Gallagher you at least feel like you’re dealing with an adult capable of rational thought. Lopez just seems damaged, and dumb.

All of modern life plainly makes her miserable. She seems happy only at Mass, which she frequently live-tweets. Her Twitter feed, which used to be made up primarily of normal people things like baseball and the weather, is now often just an odd series of often slightly differentiated links to her articles, all of which have bizarre, obscure headlines, and all of which are about how degraded and horrible society is, besides the pope, who is swell.

These are some of the least self-aware people in existence. Read the whole thing.

K-Lo is a lot like the fundamentalists who have issues with evolution and science yet still use the fruits of the very things they hate.

Today world is not perfect (waaaaay far from it), but neither were the eras preceding it which were worse for everyone but privileged white males. Without feminism, K-Lo wouldn’t even be a writer let alone considered to be hired by any organization. Without the pushback against racism… same thing.

No awareness of the history or movements that helped put her where she is today. No different than watching sons and daughters of immigrants shriek about recent immigrants… I see you Arpaio, Hannity, Taitz, O’Reilly, etc.

I wonder how many times she’s been referred to as “that Mexican girl” by her colleagues. Or something worse.