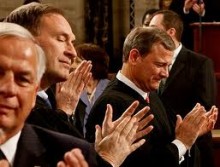 Until people who vote can be made to understand that the GOP is their enemy, not their friend, we will not have nice things.

5 Signs of a Radical Change in U.S. Politics [The Atlantic]

Today’s issue of “GOPers accidentally giving the game away” brought to you by the Pennsylvania GOP majority leader:

“Voter ID, which is gonna allow Governor Romney to win the state of Pennsylvania, done,” Turzai said at this weekend’s Republican State Committee meeting , according to PoliticsPA.com.

I’d love to be disgusted, but anybody who was paying attention knew this already…

@al2o3cr: Isn’t this why they’re going after Holder?

No, no, the Five Nutty Professors attempted mightily to explain their decision in Bush v. Gore, but their logic was tortured and flawed, and it amounted to a denial of centuries of precedent, starting with their taking certiorari to begin with, which gave lie to previous refusal to interfere in states’ rights, including elections. I don’t care what you think of Alan Dershowitz, but the guy wrote a spot-on, stringent attack on their reasoning in that case, which was the “Worst Since Dred Scott” until Citizens United came along.

So now we can officially call this blog “Democracy Death Watch.”

In 2008 Candidate Obama talked a lot about “Change we can believe in”. It appears that the real change wasn’t to be in government policies, but in the actual form of government. Now that the supreme five have tossed out the Montana case against Citizens United, government of the few, by the few and for the few appears to be the law of the land in these United States. May God have mercy on our souls, because that’s all we’re left with.

Could have fought their noms Demrats, instead of pussying out.