BozoGate Day 3: Will Lamestream Media Ignore the Scandal of the Century? 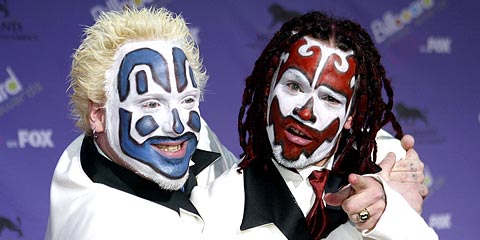 As our devoted readers know, the political world was rocked over the weekend by Christine O’Donnell’s claim that her father played Bozo in Philadelphia — a claim that cannot be confirmed, even after extensive research.

Well, the political world should have been rocked. But so far, nobody’s picked up on this game-changing controversy. Even after we launched a national billboard campaign Sunday to take the issue to the People of These United States.

But our diligence remains masturbated unabated. Because there’s a principle at stake, a principle grounded in the foundation of our democracy:

Anybody who would lie about a cherished childhood icon is unqualified to serve in the United States Senate.

Really. It’s in the Constitution. Look it up.

So, what’s next? We need money. Lots of it. Send us $35, and we’ll consider sending a fax in your name to every member of Congress. Send $75 to our billboard fund, and we’ll think about posting our message on every highway in the country.

Because without money, we can’t channel your outrage into our bank account. And then nobody wins. Not you, not the nation — and definitely not us.

6. Adventures in Surrealism: BozoGate on Countdown

Nojo, have you become a Republican? (Shameless shilling being their hallmark)

Anyone know of a way of checking Daniel O’Donnell’s possible AFTRA membership?

@karen marie:
clowns scare the piss out of me…always did. way before gacy or bozogate. and let us not forget BTK. bakettes bday parties as a kid featured yoda and ET, etc.

funny story: my BM arranged for ET to show up at her 5th bday party.
he shows up with gorilla hands. maMA’ chased him around the party demanding her money back because “ET did NOT have hair on his hands” you think I’M nutty?

how is Lucy? i’m looking at day 3 with no accidents–howz it goin over there?

@baked: I’m sorry to hear about your clownphobia. I love clowns. Bozo was one of my favorite shows when I was a kid, and the clowns were my favorite part of the circus my grandfather took us to annually in White Plains, NY in the 1960s.

Lucy is doing great. Her peeing issues were directly related to her having a UTI. As soon as she received antibiotics, the peeing inside stopped! Yay!

Also, too, she has figured out how to let me know she has to go — she scratches on the bathroom cabinet.

@karen marie:
excellent news…i have hung a bell on the front door in hopes of her signaling with it. so far, she is trying to eat it. what about “mouthing?”
our latest project…i have taken to holding her mouth shut. aint workin.
my hopes are it will go away when she’s finished teething….

i swore off circus’ decades ago due to animal abuse issues, the clowns added to my aversion. anyway, i live in a circus, not missing anything.
i have never taken my daughter to a circus, that’s what weekend donor did, despite my objections.

@baked: Putting your hand around the mouth to shut it won’t work from my experience, and it freaks the dog out. The way I dealt with my puppy’s mouthing tendency was the suggestion from the Monks of New Skete dog training book which is when the pup comes up to do that, put a flat hand (fingers pointed up) in front of their snout. They won’t be able to get their mouth around your hand (except maybe your beast could) and they reflexively lick your hand. If everyone who encounters her does that, she’ll eventually just lick and not mouth. Of course, the next step is to take the dog from licking to just sniffing….my pup had problems with that one and so she was just a licker – she’d lick the hand of anyone who came up to pet her.

Use the Stinque kickback linque so Nojo can feed the hamster.

Hi from Fairhope, Alabama. Yes, the skies are so blue.

@SanFranLefty:
i even HAVE 2 of their books…it’s the very best of the best dog training books.
thanks lefty, will be working on that….xxx
(i have always wanted one of their shepards)

also! BELLA is becoming a master ball/frisbee catcher
! she leaps and contorts like a star running back!

@baked: You know, B, I think you deserve a Stinque special award for being the only Stinquer to post both an R-rated photo and a photo of special plants the size of Godzilla. There is just no stopping you.

@Dodgerblue:
only lefty on the scrabble board. and i can’t stress this enough….
lefty murders us mostly, so remember DEFENSE!!! you go before her this round, don’t leave her a triple! she’s deadly!

an award from nojo? i have to wait till another pet dies to even get a tweet.
as i’ve noted before, noge finds my DEAD DOGS less dull than me.

@baked: Yeah, we are still having small problems with mouthing, but I second SanFranLefty — putting your hand around the mouth isn’t going to solve the problem, and it could lead to problems in future when there is a need to handle the dog’s snout and/or mouth.

The best thing you can do is just withdraw from play the minute teeth touch skin and resume as soon as the teeth stop flashing, and walk away for a minute if it resumes. It is recommended making a distressed puppy noise also, but with Lucy that only makes her redouble her effort.

Our biggest problem is Lucy’s leash chewing. She chewed through her first leash in a just under a month and has just about decimated the Lupine. It’s a tougher nylon so it’s taking her longer, but my trainer gave me permission to speak sharply to her when she does it and we are making good progress on that front.

Lucy also loves the ball but she’s not big on catching it in mid air. Likely because our two balls, one hard rubber (Kong) and one soft rubber, are really too big for her mouth. She can carry them because they both are hollow and have openings for shoving stuff into. Her favorite game is taking the ball for laps around the yard before returning it to me. She is quite the speed racer. Yesterday at play group she was giving the bigger dogs a run for their money. I can’t wait to start her on agility training. She graduates from puppy kindergarten to obedience in early November.

I trained my two Cockers based on recommendations gleaned from The Art of Raising a Puppy by the Monks of New Skete. They were absolutely brilliant dogs. Lucy is definitely much more of a challenge and I’m glad I found an excellent training facility.

@karen marie:
this morning Bella had BOTH of her tennis balls in her mouth, while my dead camera charged. HEElarious! i used to love puppy kindergarten when i raised pups in civilization…i’m on my own here with the monks of new skete. Bell is my first dog that could compete in agility, exciting..
but for having to construct my own. she will be a very good doggie when she grows up, i’m sure of it. she’s smart as a whip and lives to please. she can identify her different toys..”bella, bring me the monkey, bring me the hedgehog, etc. brilliant! but she is my last puppy, i’m too fucking old for this. she just went down for her long morning nap, and i am outa here!
see y’all later!

@karen marie: I’m a member. I’ll see what I can do when I get home.

Exciting news, people. I think I might have found a way to settle things down in the States and just generally get everyone to STFU.

We should be invaded by Denmark! Yay! I mean, how cool is that. I’ve got my people working on getting me in to see Queen Margrethe when she gets in from shopping. They would totally bring the calm to the crazy. We might have to bomb a couple of cities just to show it’s for real. I’m thinking Phillie and, I don’t know, San Diego? I’m offering the queen the Pierre in NYC as her States side palace and a promise to meet Elaine Stritch. But the one thing we could really use right now is a good invasion and I think the Danes are it. We do not want the Chinese. They’ll be all like ‘Pay, up, Bozo, or the puppy gets it.’ (See how I got back on thread there?) The Danes would make an ideal occupying force. I told them they don’t have to occupy the deep south. I mean, am I right? That could be the Vichy US. How awesome would it be to have an occupying force of tall, muscular ash-blonds with surprisingly sensual mouths talking flawless English? The girls are pretty toothsome too.

Their economy’s taken a big hit and the government needs a diversion. We are… well, I don’t think I need to spell out what’s going on in God’s Country. So it’s win-win. We hand off the responsibility to them; they get shit done; we teach them gang signs; they nationalize McDonald’s to put their economy back on a sound footing and improve the general awfulness of the food. Pickled-Herring on rye. How awesome would that be?)

Just waiting till I hear from the Queen…

@Snorri Haraldsson: I await your report!

I look forward to our Danish overlords. I’ll have the coffee ready!

@baked: Yeah, I understand the technical problems in catching these things. Every time Lucy and Gracie do their boxing routine, it’s either too dark to film or I don’t have the camera at hand.

Poor Gracie is really missing her protector, Mr Mittens. Last night she was slightly bloodied by one of the roaming feral cats. I can’t send Lucy out to chase them off because she thinks all kitties are her friends. She’d end up bloodied too.

@Snorri Haraldsson: As long as it isn’t the Swedes. I just am not perfect enough to be ruled by Swedes – they are machines.

@homofascist: That’s why I say the Danes. They just want to snuggle and feed you bejdsede sild.

@Snorri Haraldsson: But who would be our Hamlet? I’d volunteer, but I can’t make up my mind.

@homofascist: I’m a quarter Swede, but I’m also a Taurus. I think that makes me the ghost in the machine.

@nojo: That makes a lot of sense actually.