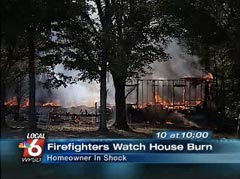 Finally, a real-life example of a Libertarian talking point:

Imagine your home catches fire but the local fire department won’t respond, then watches it burn. That’s exactly what happened to a local family tonight…

The homeowner, Gene Cranick, said he offered to pay whatever it would take for firefighters to put out the flames, but was told it was too late. They wouldn’t do anything to stop his house from burning.

Each year, Obion County residents must pay $75 if they want fire protection from the city of South Fulton. But the Cranicks did not pay.

The mayor said if homeowners don’t pay, they’re out of luck.

Damn straight. Why should freeloaders get the benefit of emergency services?

Just ask Cranick’s neighbor. When the fire crossed the property line, the firefighters leaped into action. After all, the neighbor had paid up.

Firefighters watch as home burns to the ground [WPSD, via ThinkProgress]

Those fees would add up pretty quickly. Your old tax rates would seem pretty mild in comparison.

If we had a real press corps, somebody would make Rand Paul take a position on this. Sadly, nobody will.

This is reportedly how Pompey (back in ancient Rome) made his fortune. He had a group of “firefighters” that would rush to the scene of a fire, then stand back and do nothing as Pompey offered successively lower amounts to the building owner as it burned.

This is where a Danish invasion would so pay off. The firefighters would show up and be all tan and blond and shit and everyone would want to carry the hose. Of course I had to agree upfront to take Tenn, Miss and Ala off the table for obvious reasons. So it wouldn’t have helped in this case but it is so the way to go. Hey. Maybe we could outsource the invasion and pay them to invade us with the money being squandered on the midterms?

@Snorri Haraldsson: If my experience with Danish men holds true, it might take a couple of us to carry the hose.

So if Cranick’s kids were trapped in the fire and screaming for help, would the firemen have still stood by and done nothing to try to rescue the kids?

And if a pregnant Mrs. Cranick died in the burning house, afterward Mr. Cranick would be criminally charged with infanticide.

I want to be sympathetic to this guy, but I can’t – especially after he was quoted as saying he thought the firefighters would respond to his house even if didn’t pay the fee. If your cheap ass can’t be bothered to shell out 75 bucks because Rush and Beck tell you that paying money to the government is socialist, then may the invisible hand of capitalism sodomize you without lube.

Couldn’t they have just put out the fire and billed him after? Hell, tack on a late fee, if you want to make a point. But don’t just stand there while someone’s house burns down.

Your private enterprise insuror will certainly start to have a problem with you if you choose to Go Galt when it comes to fire protection, too.

@mellbell: Probably because then no one would pay the fee until their house catches on fire. How is the city supposed to budget for fire services if that happens?

@TJ/ Jamie Sommers /TJ: Of course, but, assuming that the outrage from this episode isn’t enough to force the city’s hand, will anything short of bankrupting the fire department reveal the inanity of a pay-for-services scheme to these Randroids?

@mellbell: I imagine this little episode would do it, at least for the Randians in this neck of the woods. But the City holds all the cards here. They don’t have to provide any service to the unincorporated area at all.

If I were the mayor, facing revolt from the hicks, I’d cut that shit off entirely. You don’t like our fee? Fine. Put your own damn fires out. I’m sure the taxpayers in the City who are subsidizing the service for the hicks would be a-ok with releasing the deadbeats from the municipal tit.