Stinque
Home Latest Comments Log in
If it smells, we’re on it.
Stinque
Mastodon: @stinque@mas.to
A Special Place In Hell, Die! Die You Fucking Monster! 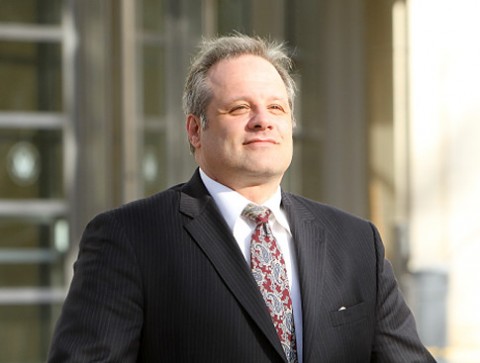 Neonazi hatecaster and Sean Hannity fascist circle-jerk partner Hal Turner was convicted Friday of threatening three federal judges who ruled to uphold handgun bans in Chicago and Oak Park, Illinois last year, earning him a sentence of up to 10 years during which Stinque.com hopes this monstrous freak is stomped to death by authentic neonazi murderers.

Two trials were scrubbed last year due to, first, a deadlocked jury and then a mistrial declaration by a judge. Prosecutors accused this freak of writing on his website in June 2009, “Let me be the first to say this plainly: These Judges deserve to be killed.” Accompanying this recommendation for his fans who could read were photographs, phone numbers and work addresses for the judges, clearly targeting data for psychopaths.

A righteously resolute jury took just two hours to convict this monstrous piece of shit of threatening to kill three federal judges. His mommy complained the first amendment had been destroyed by the conviction and his kid had the good fortune of seeing his dad dragged off and will hopefully never have to endure this nazi’s twisted presence again.

During the trial, Turner tried to pass off his threats as inspired prose vetted and approved of by the FBI who hired this piece of shit as a snitch to inform on the neonazi and white supremacist movements, a consulting contract that should make Turner very popular in the federal penitentiary. Mid-trial, the fucking idiot also tried to extort an FBI agent, threatening to expose him as a perjurer and destroy his law enforcement career. Stupid fuck.

It may be true that the agents tutored him on boundaries of protected speech but, as taxpayers, we at Stinque.com hope the FBI made sure fuckface went clearly and unambiguously over the line so this piece of shit could be fitted for a wedding gown and be shipped off to a federal penitentiary for inmate entertainment. Any asshole who would take a federal agent at face value and think he is not being gamed twice sideways deserves to be stomped to death by neonazi murderers in a federal penitentiary.

The unindicted co-conspirator Sean Hannity is still, however, at large. Hannity used his radio talk show in the late 1990s to propagate Turner’s psychonazi ravings, raise his profile and to spew the kind of psychopathic nazi rage and hatred that Hannity wanted to cultivate. By the time Hannity’s brand began maturing, in the early naughts, and Hannity’s TV show, Hannity and Colmes (with pathetic stage-liberal posing as battered wife Alan Colmes) began establishing itself as a ratings leader, according to a 2005 report by The Nation, even crypto-nazi Hannity had to distance himself from Turner and stopped taking his calls on the radio program.

By that time, though, Turner had been emboldened apparently by his brush with a ratings icon like Hannity, to start his own shortwave hatecast, according to The Nation’s 2005 report on Hannity and Turner’s courtship. Who knows what kind of inspiration Hannity provided for a small-town fucktard nazi like Turner who was otherwise only qualified to clean the assholes of mange-stricken dogs at animal shelters with his tongue? Good question for the FBI to ask that piece of shit Hannity, if the bureau hasn’t already.

Justice Department officials take note that Stinque.com recommends Turner be subject to the full ten-year sentence because he is a monstrous freak who deserves to die a grim and inglorious death in prison and because he fucked with with this august website. Stinque.com denizens may remember, Turner visited the site to respond to a report about Hannity’s website poll asking about readers preferences for revolution: a military coup, armed rebellion, or war for secession last year. Here’s the note from fuckface:

It’s always fun to read how you left-wing crazies go off the deep end over me. It’s even more fun to be able to add your names to my list of “things to take care of” when the time comes.

Hal, clue: there’s isn’t going to be a time to take care of anything. You know why, asshole? Because you’re a stupid fucking nazi that believed what the FBI told you, ratted out your compatriots and got sucked into a set-up that Helen Keller could have spotted in her sleep from 1200 miles away and you will soon be in jail where real live nazi serial killers will rape you to fucking death and behead you for lunchtime entertainment. Think of Stinque.com when the first boot smashes your front teeth down your fat fucking throat.

Hal can still be our penpal from the slammer, right?

@nojo: Sure if he wants to get postcards that ask him why the fuck he isn’t dead yet.

@nojo: That sorry son of a bitch’s liver didn’t give out yet?

Wait Chainsaw, why didn’t you choose the “A Thought at Bedtime” tag like I did for pictures of a hip-endowed tank-top wearing Michelle Obama??

Hal’s the first “Stinque” commenter to go to jail.

@SanFranLefty: I didn’t even know we had one. I just used the old standby for situations like these – “Die! Die You Fucking Monster!” – figuring it most appropriate. I will use it next time!

@FlyingChainSaw:
i just called…machine says, “not accepting calls”
I GUESS NOT ASSHOLE!!!!

@ManchuCandidate: Oh, yes, it’s great to have Stinque.com commenters in the news, lends the place its own brand of tawdry celebrity. We’re the website that got death threats from Hal Turner, famous nazi prison boy toy.

@FlyingChainSaw: I remember that comment by him now. Is he the same guy whose “diaries” were in Timothy McVeigh’s possession when he blew up the Murrah building? And is he the one whose crazed listener killed the husband and mother of the federal judge from Chicago?

@SanFranLefty: The Turner Diaries were written by an insane discredited academic named Pierce. I have never associated this clown with inspiring a murder but I am not a regular observer of right wing insanity, just an occasional tourist of the fever swamps.

@ManchuCandidate: He can join the Aryan Brotherhood, if he’s not already in it.

@FlyingChainSaw: That Nation article you link to says that after he went on a rant about a particular federal judge, her mother and husband were killed at her home:

In 2003 Turner said US District Judge Joan Humphrey Lefkow was “worthy of being killed” for ruling against white supremacist leader Matthew Hale in a trademark dispute. The day after Lefkow’s husband and mother were found murdered on February 28, Turner penned an article for the far-right chat room Liberty Forum outlining tips to help white supremacists avoid scrutiny from federal agents. “So what can we, as White Nationalists (WN), expect as a result [of the killings]?” Turner wrote. “Frankly, a SHIT STORM!” Turner was eventually visited by FBI agents, though when a suspect was arrested, he had no organizational links to white supremacist groups.

@SanFranLefty: Teaches me to read by string-search. The last sentence indicates that it cold have been something else, like a ruling that didn’t go the defendants way, that inspired the assassination. Lemme look. One sec. Odd he doesn’t resolve the killer’s motivations.

@SanFranLefty: Yeah, incomplete reporting or sloppy editing or both – or publishing logistics precluding timely updating of citations. They got the guy in West Allis, WI after he blew his own brains out during a traffic stop in March 2005, a few months before the article was published but, as I surmised, was all about a case going the wrong way from the killer’s point of view. The assailant was a plaintiff in a medical malpractice case that the judge dismissed. Deaths were in no way related to fuckface Turner.

On March 10, 2005, Chicago Police and federal agents announced a possible break in the case. According to investigators, a van was stopped during a traffic stop in West Allis, Wisconsin, at 6 p.m. on March 9. As West Allis police officer Rick Orlowski approached the vehicle, the driver, identified as electrician Bart Ross, shot and killed himself. Later that night, a suicide note was found in the car which admitted to the murders of Lefkow’s husband and mother, allegedly providing details about the crimes which would have been known only to the actual murderer. Ross was a plaintiff in a medical malpractice case that Lefkow had dismissed. Investigators also found over three hundred .22 caliber shells in the vehicle, casings of the same caliber that were found in the Lefkow home.[11] DNA evidence from Ross allegedly matches the cigarette butt found in Lefkow’s home. Ross also sent a handwritten letter to WMAQ-TV describing breaking into the Lefkow home with a plan to kill the judge.[12]