And Yet [insert random WaPo columnist] Still Walks the Earth 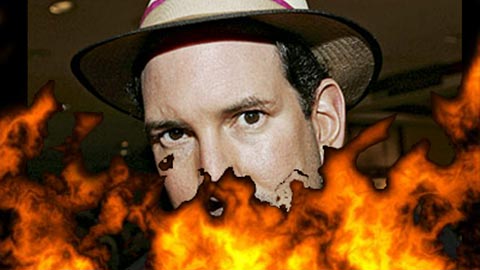 We’ve been following Dave Weigel for awhile — first at the Washington Independent, then at WaPo, where he recently moved to continue his coverage of wingnuts and teabaggers.

Now we’ll have to find him somewhere else, because he just resigned today.

Turns out Dave was also active off-blog — at “Journolist”, a private email list for shop talk. Fishbowl DC decided to liberate some of his messages there, two of which we find delightful:

“This would be a vastly better world to live in if Matt Drudge decided to handle his emotional problems more responsibly, and set himself on fire.”

“It’s all very amusing to me. Two hundred screaming Ron Paul fanatics couldn’t get their man into the Fox News New Hampshire GOP debate, but Fox News is pumping around the clock to get Paultard Tea Party people on TV.”

Weigel publicly apologized Thursday, trying to get ahead of the story before it broke, but it was too late — the Daily Caller ran some more fun entries this morning:

“There’s also the fact that neither the pundits, nor possibly the Republicans, will be punished for their crazy outbursts of racism. Newt Gingrich is an amoral blowhard who resigned in disgrace, and Pat Buchanan is an anti-Semite who was drummed out of the movement by William F. Buckley. Both are now polluting my inbox and TV with their bellowing and minority-bashing. They’re never going to go away or be deprived of their soapboxes.”

“It’s really a disgrace that an amoral shut-in like Drudge maintains the influence he does on the news cycle while gay-baiting, lying, and flubbing facts to this degree.”

Damn, Dave, you’re good. And since Olbermann ignored our invite, you’re always welcome here. No pay, alas, but we’ll buy a Plushie STD for ya.

Is this a Full McChrystal?

Any random WaPo columinst? Yes, they are all despicable, but why in God’s name would I choose anyone other than Krauthammer? He takes odious to a whole new level.

@Nabisco: I’m going to flip all the cards and declare a winner on the first comment.

Here’s the part I don’t get: You never, ever, put something on the intertubes you don’t want coughed up later. A “private” email list that goes out to who knows how many gossipy hacks? Danger, Danger!

Second rule of Beltway Club is don’t shit on members of the beltway even if they are pathetic losers who deserve scorn and censure.

Explain to me why he has to apologize? We are not getting it.

Guy sounds lazy. Hard to find angles? You don’t cover crap like the teaparty. You track the money to their sources, find out who is in control and map their agenda to other crimes. Otherwise you’re covering theater. And he sounds stupid. Everything said online you have assume both permanent and ubiquitously accessible.

@Benedick: I don’t get that either except for factual errors. Drudge doesn’t have emotional problems. He is simply and clinically an imbecile.

Ironic how little freedom of speech journalists have.

The only apology to the teabaggers should be a typical “I’m sorry that you are mad” one – after all, that’s all we’ve gotten for all the racist and/or idiotic shit they’ve been up to the last year+.

@nojo: You never, ever, put something on the intertubes you don’t want coughed up later.

You mean what goes on in Stinque doesn’t stay in Stinque? Uh oh…

Oh and hey: upgrade to busyness class, yay! This after being frisked by three different sets of screeners, at least two of whom were deep in the thrall of their betel chew.

@Nabisco: You mean what goes on in Stinque doesn’t stay in Stinque?

My parents are going to discover what I’m doing sooner or later.

Thanks to CryBaby Tucker Carlson and his vanity blog.

It seems impossible, but Tucker’s an even bigger dick than I thought.

@ManchuCandidate: There’s some good old-fashioned DC intrigue going on: Whoever leaked the comments wanted to take Weigel out. And succeeded.

Which means they considered Weigel worth taking out. Something of a compliment, really.

@Capt Howdy: That would be the Air Mobile Assault version of the cat with prosthetic legs we saw on the BBC earlier today. Wait ’til they get Gundam suits.

@redmanlaw:
its totally hypnotic. I cant stop looking at it.

was a video of the stinquer that was on CNN today posted (dodger?)? I was working and so I missed it.

@nojo:
Character assassination and leaked email is the weapon of choice for the careerist asshole. Not shocked.

We are still not understanding why a private citizen cannot express his private opinions to his working acquaintances. And why said private citizen does not tell all and sundry to go fuck themselves. And why citizen’s employer does not back him up. We are wondering if we live in Hussein’s Iraq.

you mean this guy

one of my dogs has an artificial hip. does that count?

@Capt Howdy: We go all warm and runny knowing you had a hip replaced in one of your white dogs. How is Lucy doing? How are you?

We are fostering one of the OH’s beloved nephew’s dogs while he drags his family to Hollywood to make a fortune in 3rd tier reality trash. We adore him but wish he’d spent more time reading Keats than walloping in the West End.

the vet did it as an experiment. it was only a couple of hundred bucks. and he has recovered almost completely.

@Capt Howdy: I wanted a total right knee replacement (it’s been scoped 3x, ACL replacement, hurts in the cold, change in weather so that 500 mg Tylenol is not helping right now with the rain coming) until I actually saw a guy with one hobbling around in a very bad way at our yard sale and out on his neighborhood walks.

@nojo: Pareene said it was some old biddy/gossip columnist at Mediabistro who use to work at the post.

@TJ/ Jamie Sommers /TJ: And who also (if it’s the same reference) shills for a PR firm. Or it’s the PR guy who posted it.

I’ll have to catch up on the details tonight. The story’s all over the place.

@TJ/ Jamie Sommers /TJ: I see your governor is continuing to keep it KKKlassy – Brewer: Most illegal immigrants smuggle drugs

Maybe it’s just because I hang out here, but nothing he said seems that bad to me. That you can get fired for? Sheesh.

@SanFranLefty: My friend ****** has the funniest damn stories about crossing the border. He had the worst fucking coyotes in the world.