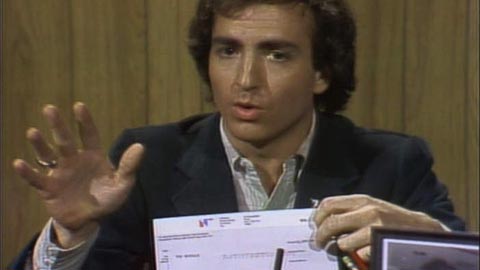 Longtime Stinque detainees will recall that once upon a time, before the Not the MSNBC Ad, there was an MSNBC ad. And a purty ad it was, with rotating headlines and a sponsor who actually paid for the privilege of raping your eyeballs.

That’s the part we recall fondly at Stinque World Domination Headquarters and Discount Vuvuzelas: the twenty-dollar check that arrived in the mailbox every month. The MSNBC ad paid per “impression” (each time you visited a page) and not per click. The substitute Google ad isn’t nearly as beermoneylicious, and we only keep it running for the occasional context-dependent amusement.

So what happened to the MSNBC ad? Simply put, one day they told us to fuck off. We were using very naughty language on our site, distressing the advertisers who preferred less competition for their expensive eyeball-raping. We could either tone down the salty talk, or kiss that monthly Jackson goodbye.

We’re not sellouts. At least not for that price.

We’ve kept the ad title long past the gag’s expiration date, simply because we’ve grown quite fond of it. Also, you never know when it might prove handy.

Keith Olbermann, whose program provides us fine Left Coast dinnertime entertainment, quit blogging at Daily Kos in a huff Wednesday. (Has anyone quit blogging at HuffPo in a Kos?) Seems he took umbrage at a Kossack who accused him of trashing Our President’s speech Tuesday as a ratings stunt.

No, really. Somebody at the Great Orange Satan actually thought Obama gave a wonderful speech. Maybe they were watching a rerun of Denver.

Heck, the wingnuts were as stunned as the moonbats: They couldn’t believe Keith and Tweety and Rachel actually trashed it. Because MSNBC is a mirror image of Fox, after all, and nobody at Fox crosses the party line. Except Shep, when they forget to hide his flask.

Anyway, Keith’s now a Blogger Without a Country. And since nobody else will have him, we’re extending an open invitation for him to blog here. If we can’t have an MSNBC ad, we’ll settle for an MSNBC host.

And this being Friday, we’ll conclude our pitch with a personal touch to cinch the deal: One of our favorite shows as a kid was “My World and Welcome To It.” You may not be familiar with it, but Keith will know. It was based on James Thurber.

Only if he blogs about Sport.

Mayanti Langer looks like she’s wearing cheap curtains for a dress during Germany v Srpska. This may not be the first time Germany was upset by partisani from Belgrade, Klose is out of the match and the Reich is down a goal at the half.

Dude. $20 keeps you in beer money? You’re not drinking enough.

When is Ford gonna figure out we’re a bunch of commie deviants and sexual preverts?

@Prommie: I’m surprised we don’t have Rentboy ads here yet.

@Nabisco: Got yr emails re ladies of soccer. Guess I’ll have to throw the str8 boys around here a bone(r) this weekend.

gotta say he has had some moments lately

Sure Olbermann knows sport and can do a fair parody of Edward R Murrow – but can this fucker deliver the apocalyptically vulgar in the great tradition of Stinque.com, can he, Nojo?

I doubt his commitment to pig fucking.

I doubt his commitment to skull-fucking.

@IanJ: the bar is high, indeed.
@SanFranLefty: Te agradezco in advance. Although after a night of “rooting” for “footie” with US “fans” at a foreign “pub”, I’m not only well into my cups, but I’m also thinking the Hottie of the Day should involve skullfucking, referees and Slavs, preferably a Slav referee being, you know, intimately gored in the cranium.

@Nabisco: It would be cool if he brought Dan with him to Stinque. All other Sport is all about the Lakers this morning, or Tuesday or whatever in M.I.A. land.

If I had known he was so sensitive, I would have meandered over to Kos (which I loathe) just to post some Cornell jokes.

@redmanlaw: Go ahead, piss me off some more, bato. I was fooking rooting for the Celts, as if I have any skin in the game.

ADD: I was anointed as Bob Bradley’s cousin, and his son’s uncle tonight (mad ball handling skillz in common, apparently) so let me just put in a vote for him to be the WC fookin hottie of the day, even if only Skinny Donovan is the only one to remove his shirt.

@Nabisco: Woah, buddy, you’re well on your way to “my xon you will dire” territory….but I have to admit the time change makes it awesome to witness your late night fooking shenanigans while I’m sipping my morning coffee at work.

@IanJ: That’s right. Nojo, ask this guy if he can articulate his commitment to skullfucking.

@Nabisco: I was going to feature some of the wimminz you sent me for hottie of the day, but if you insist I’ll go with boy Bradley. ;-)

I doubt his commitment to Sparkle Motion.

@Original Andrew: I’m sure he looks fine in a rabbit head.

I’ve never understood that whole “My Xon you may dire” thing. You guys are cliquey.

And while I’m thinking about Google Ads, let’s say adieu to SmileTrain.

@Tommmcat Still Gets Carly Confused With Meg: I think it was during CP days, but it was the high water mark for After Dark overshare drunkitude, courtesy of RML, who was getting increasingly incoherent one night until typing this enigmatic statement and going offline/passing out.

@Benedick: Right, you saved up your moment in the spotlight to describe a night of savage pestorking and abandoned pussy eating.

@FlyingChainSaw: Speaking of which, I just opened up a Stinque After Dark thread.