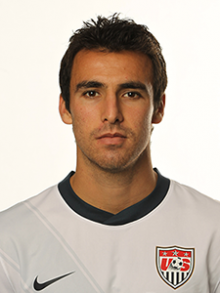 Well, he’s not running around shirtless like some of our hotties, but today’s World Cup Hottie has been selected in anticipation of tomorrow’s U.S.-Slovenia game (6:30 am PDT/9:30 am EDT/??:30 Nabeesco Time).

Proving that you can combine brains with brawn, is the USA’s Jonathan Bornstein. Currently starring for LA’s Chivas USA, he plays defense, yet scored one of the winning goals against Costa Rica that helped the US qualify for the World Cup. Weirdly enough, that goal made him a national hero in Honduras, which qualified for the World Cup for the first time since 1952 as a result of the extra goal against Costa Rica.

He graduated with honors from UCLA in 2004, and yes, he’s a Member of the Tribe. And he blogs.

And he’s easy on the eyes.  He’s not waxed, so he’s not TommCatt’s type. Couple more pics and alt-text after the jump. 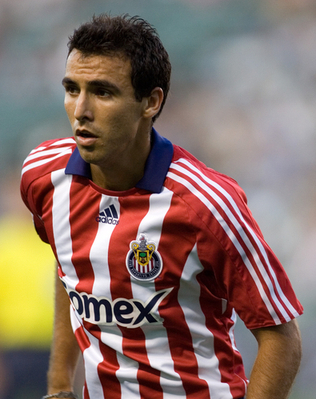 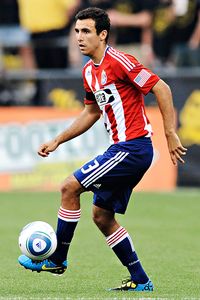 I’d give that a lick or two. How hairy is the back, though?

OK, he gets Dodgerpoints for being a UCLA grad and MOT, but let’s face facts, Lefty, he’s kind of scrawny. Back up the truck o’latkes.

Ooh, he might be my favorite so far. Hot, smart, speaks English – what’s not to love?

I bemoan the lack of female football hotties … damn it.

@blogenfreude: What America needs is a nude female soccer league. This country is well and truly fucked without one.

@Bloggie: Patience, grasshopper. Women’s world cup is next year. I can reprise the feature next summer for the str8 boys.

@mellbell: You know, of all the players I’ve featured to date, I think he’s closest to my type, whatever my “type” is: good looking but approachable, smart, athletic/soccer-playing, dark complected, tall and thin but muscular. Being a MOT is a bonus point given the reputation of their men’s attentiveness in bed.

@Dodgerblue: I’m sure I outweigh him by 20 pounds, but the wiry athletes are deceptively strong.

Homofascist much approves this message.

It is a commentary on my current state of mind that my first thought was “Chivas? Like the Scotch?”
Another fine job, SFL.

@Dodgerblue: BTW, did I spell “bubbe” correctly in the alt-text?

@homofascist: If Nojo teaches me how to use a survey plug-in, maybe we can have our own election right before the finals as to who wins for Hottest Hottie of World Cup 2010.

Speaking on behalf of the scrawnies everywhere, I approve this selection.

@Blog & FCS: the halftime hottie on Star ESPN continues to keepe tuning in. Her attire gets more revealing as the games go on.

kickoff (or at least seat at the bar) 6pm

Kabul was 11.5 hours ahead of California, I never understood the half hour thing.

Send me some linques to the LotusLand halftime hottie and I’ll throw the str8 boys a bone over the weekend.

@SanFranLefty: You did. Do you know the wonderful Yiddish expression: “If my grandmother had balls, she’d be my grandfather”?

@Dodgerblue: No, I don’t know it in the English nor in the Yiddish. But I am watching last night’s Colbert rerun and all I can say is “MORE VUVUZELA!!!”

@SanFranLefty: Parts of India are the same. Time zones, how do they work?

@SanFranLefty: Kobe is having a terrible night. Nice timing, dude. Lakers down by 13, Rondo is making fools of them.

@SanFranLefty: Last night I watched his (calculating time differential) Wed night broadcast, and loved the ‘vuvuzela filter’ he had to put on Black Eagle’s speech.

@Nabisco: We are Colbert’s musical guest last night. And we are not young.

@nojo: It’s funny because it’s true. When I bought the first Devo album, it was a guilty pleasure I thought I had to hide from my even more srsly Hi Fidelity-like friends. Turned out we were all Devo. But when I saw them on Colbert, I immediately thought “old”.

Speaking of which, half century creeping up. Do I take ecstasy and pretend to be young again for a day, or just draw the shades and finish “War and Peace” for the second time?

@Nabisco: The good news is that you can quit pretending to keep up with the kids.

yay soccer. I am outraged over (choose one from column A and one from column B): oil, gay marriage, catholics on the supreme court, genetically modified corn. How about them vuvuzuelas? Like airline food, and look at what deregulation has done, boo Reagan. Old cultural cliches are now hip again, but only if you mention them just the right way.

@Nabisco: Rage, rage, against the dying of the light. Rage most ragingly, “be young, wild, free and young, loosen up your pony tail,” all hail Mojo Nixon. The world is insane, completely, and always has been, always will be. Laughter is victory over futility and death, laugh, laugh, at it all. Take the inexplicable mystery of the fact that somehow, against all rational odds, the universe conspired to give you the ability to feel joy and pain, and spit it back in the fucking shitty universe’s face, by choosing joy. Take the fucking ecstasy no, wait, save it, and take it with me, its only weeks away, a few hours of escape from the fucking endless parade of awful that sensitive and aware people are cursed to feel every fucking waking moment. Fucking stupid self-satisfied fuckheads, they never feel a moment of angst or despair or sorrow at all the fucking hideous injustice and pain and murder and horror going on in the world, the vast majority of people are utterly oblivious, and lead far happier lives than we do, because we were cursed with intelligence and curiousity and perspective and can see the injustice and horror most people are just completely blind to. And I ended a sentence with a preposition, and even taking a nanosecond to note that is a waste of spiritual energy. Anyway, the vast majority of clueless idiots, never feel the fucking pain, and goddamit, we deserve our moments of oblivious happiness, even if we can only achieve the state of NOT BEING MISERABLE BECAUSE WE FEEL THE PAIN OF EVERYONE, even if it takes chemicals to take a temporary vacation into the default state of the run of the mill moron, fuck it, we deserve that vacation.

@Promnight: fuck it, we deserve that vacation. Dude, you are my Neil Cassady.

But I’m afraid to ask what you think about whether I should try out one of those little blue pills* my friendly chemist offered to sell me when I told him I was going to see Ma Nabisco in eight days. You know, to see if there are complications and all.

*Note to After Darkers: not required, mind you, ifyouknowwhatimean.

@Promnight: Old cultural cliches are now hip again, but only if you mention them just the right way.

See the USA, in a Chevrolet!

@Nabisco: Not pretty, but it’s a W. Artest thanked his psychiatrist.

And btw, the little blue pills work. You will have a Giant Sequoia in your Pants.

@Dodgerblue: @nojo: Hmm. Rajiv the Chemist told me as much, although he used “Bodhi tree” as the metaphor.

@Nabisco: Indeed, it could provide shade for the young Buddha.

@Dodgerblue: Everyone on Twitter says your city’s going down in flames.

@nojo: It’s quiet in my little beach town. My wife and daughter are watching Top Chef.

@nojo: See, now that is a side effect that I would find curious, and surely uncomfortable. Hard to take in Andalusia all stooped over and such – however appropriately named the provincial area of Extremadura may be. Note however that the caution is about painful erection, an important qualifier. No pain, I guess, is all gain.

Breaking: Fred Thompson was a philosophy major. I may have to burn the degree.

@SanFranLefty: You won’t be the first.

Read War and Peace for chrissakes and have one of life’s great experiences. There is a sensationally good new translation which will knock your socks off. To read again the evacuation of Moscow and Natasha packing and repacking the crates and then that closed carriage turns up in the courtyard and Sonya finds out who’s inside it and… Dude. Nothing is better.

“modern advertising in the subway from the professionals”? Great, now we’ve got Ukrainian ad agencies spamming us. WTF thought *that* was good placement?

@Bennie: that’s the copy I have on the nightstand. It’s very good. I read an earlier translation at the quarter century mark.

Pevear and Volochonsky, right? I first read the Maudes’ version but read this one when it came out. They also did fine Anna Karenina. But I love W&P more than anything and might just re-read it again myself. Beats me how he ever did it. Checking the galley-proofs alone would be enough to send me to a home. Mind you, he wrote it in stages so perhaps that helped. The recentish Irene Nemirovski Suite Francaise takes the evacuation of Moscow as its model for the fall of Paris and it’s very well done. Also worth a read if you haven’t already.

@Benedick: Despite her talents, the Frogs did not scruple about handing her over to the Gestapo (Nemirovski).

I have, however, changed the link to Google.