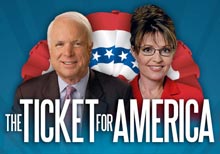 I’ve been around here 20-some years. First time I’ve ever seen a member denied an extra minute or two to finish his remarks.

You don’t wave a red flag like that in front of an army of pissed-off bloggers without somebody finding the dirt:

The PRESIDING OFFICER. The Senator’s time has expired.

Mr. DAYTON. I ask for unanimous consent that I have 30 seconds more to finish my remarks.

October 10, 2002. But wait — there’s more! What was at issue? Nothing more than the Iraq War authorization.

And we couldn’t end the week without again checking in on Sarah Palin, herself last seen fleeing the Yellow Peril in Hawaii. As we know, Talibunny opposes both socialized medicine and abortion — neither of which mattered when a Canadian hospital dangled $200,000 at her to speak at a fundraiser. Alas, we’ll never see how her legion of photo-buying supporters manage to ignore that one — the hospital has yanked the offer.

What does Talibunny know about Canada City Socialism Nazi Death Panel Medicine? BTW, we also have publicly funded abortions for some.

As for McCainiac? He can go fuck himself.

Kona yacht update: rumor has it the helicopter-sporting yacht offshore is Tiger’s.

You can’t expect McCain to remember anything. Like Talibunny, he’s just making up reality as he goes along.

@Mistress Cynica: Nojo will give you $5 if new spouse challenges Tiger to a hard-on contest – $6 if he wins and provides photographs. Exclusive terms, of course.

@Mistress Cynica: Great, they can have a hard-on contest on the green. Nojo will give you $8 if you provide photos of Mr C winning and you holding out the yard stick(s) annotating his prowess. Nine dollars if you’re in the same picture spuming a shaken can of Red, White and Blue over the crowd.

@SanFranLefty: Any fucktard that texts, “Oh, at last, my soulmate,” to a random party organizer needs to be kicked to death and thrown overboard because no one is home. He’s cooked, has been for most of forever. Keep the boat through. At the least, the liquor cabinets will be full.

Legal TJ #3 of the day: Speaking of hypocrites, and picking up on a previous thread shared by the Stinquey Attorneys, Barry Administration sez gheyz can’t get benefits, despite administrative directive from 9th circuit judge.

McCain is such a fucking piece of fucking shit I just want the villagers who pulled him out of the lake in Hanoi when he stupidly got shot down to play “This is Your Life” with this asshole and finally finish him off by tearing off his arms and beating him to death with the wet ends.

@SanFranLefty: So, let me get this, um, straight…

1. Obama Administration sez its hands are tied, because federal law won’t let them.

3. Obama Administration sez its hands are tied, because federal law won’t let them.

And thus, yet again, The Enthusiasm Gap. (Copyright Stinque, Olbermann. And not-Sully, we had Franken telling Droopy to STFU first.) Somehow the details always spin the wrong way.

@FlyingChainSaw:
That’s pretty much what German civilians did to Allied bomber crewmen shot down in World War II. Funny how that didn’t come up in MIA controversies. Oh yeah, that was Europe not Asia.

@redmanlaw:
no it wasn’t true reds, but F troop was.