Stinque
Home Latest Comments Log in
If it smells, we’re on it.
Stinque
This is America.
Developing Hard

The Boy in the Balloon 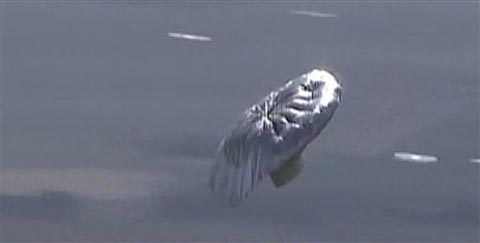 Our fixation with balloons yesterday has taken a bizarre and potentially tragic twist:

A 6-year-old boy climbed into a homemade balloon aircraft in Colorado and floated away Thursday, forcing officials to scramble to figure out how to rescue the boy as the balloon hurtled through the air.

The bizarre scene played out live on television and prompted fears that the flying saucer-shaped balloon would crash with the young child inside. The balloon rotated slowly in the wind, tipping precariously at times.

We’ve been glued to CNN all afternoon: After a two-hour, 50-mile flight, the balloon landed softly — but nobody was found inside. The current working assumption is that the 50-pound boy climbed into a box attached to the balloon, which could only handle a hundred pounds or so of lift. The box would have detached early, but at what height is uncertain.

Extra bonus bizarre points: “His family is known as storm chasers and were featured last October on the show ‘Wife Swap.'”

Kinda dumb to leave something around that could kill kids.

My parents learned the hard way (in the cave dwelling 70s) when they left my 4 year old self alone for 10 minutes with a pair of needle nose pliers and a live open electric socket. Ten minutes later, I was knocked back a foot or two (my hair sticking up) and my dad soon discovered that he needed a new pair of pliers.

Seriously. I thought this shit only happened on “Six Feet Under.”

@nojo: Thank somethingorother! I’d be hiding from those morans, too.

@JNOV: I had a more light-hearted version of the post ready hours ago, figuring he’d be found at home, but it took so damn long to play out, I had to hedge my bet.

@nojo: Oh, now they’re blaming this kid and his brother. What about those dumbass parents?

@JNOV: After reading a post on Gawker about all the TV camera chasing his parents have done, I’m not ruling out a hoax to get a free trip to NY and a seat on the Today show couch.

@Jamie Sommers: If his parents are behind this dumbfuckery, I hope they get a big fat bill.

@blogenfreude: That would be Meghan McCain.

I went home sick yesterday, not swine flu but leaf mold allergies, and I was watching The Ed Show.

Arianna had one of her lucid moments. she went off of Ed. “vhy are you talking about thees bullsheet vith so many things going on in the vorld”. Ed schooled her on the concept of “breaking news”

@Capt Howdy: I remember her as Arianna Stassinopoulis (sp? WGAF), just down from Oxford, on a game show, so stuffed with ambition it was practically spurting from her ears. And that crummy bio of Picasso. Not sure what that has to do with anything but still. Let’s leave no turn unstoned.

@Capt Howdy: Stress from having to repeat the scripted lies Dad is forcing on him.

@Prommie: Yep. That’s what I did as a kid when I truly didn’t want to do something. Not that I wandered around throwing up at the drop of a hat, but definitely upchucked when no one would listen or when I was stressed. Threw up on the woman next to me when I was dragged to church to hear Handel’s Messiah at the age of 7.