Stinque
Home Latest Comments Log in
If it smells, we’re on it.
Stinque
Cassandra was right.
Compassionate Conservatives, Die! Die You Fucking Monster!, Sex Lives of the Criminally Insane 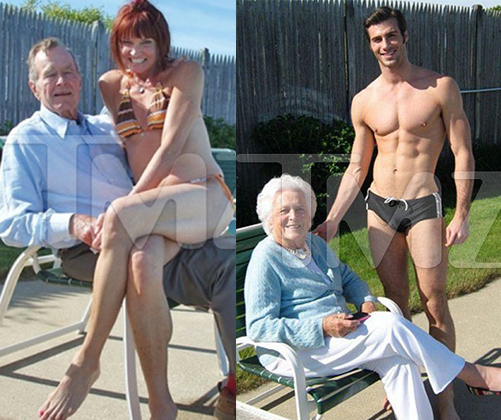 Twisted GOP Royals Poppy and Babs Bush Recently Purchased Sex Slaves to Entertain Them and Sastisfy Their Caligulan Impulses. Babs chuckles at the gonads being thrust into her face. Poppy, the debauched, senescent fuckwit, drools incontinently.

Poppy and Babs Bush have reportedly lost the trained bear that they used for savage sexual satisfaction at their Maine redoubt for the last 30 years and replaced him with a brother-sister pair from Odessa they bought from a white slave trader who brokers hookers and slave boys for Iraqi mercenaries.

“We got a great discount on Albena and Igor,” said Poppy. “It was kind of a party favor for the deal Cheney got for a sex-slave broker buddy servicing the Blackwater guys and gals and other Iraqi contrators. Great deal and I think we got the pick of the litter. Otherwise, we’d have to train another fuck bear and Babs is too old for that now.”

Typically, Babs was ass-fucking the animal with her colossal GOP strap-on while Poppy offered his gravy-soaked gonads for the animal to lick – but in a twist on her usual brutalizing boudoir tactics, Babs grabbed Sammy’s collar and pulled back hard to choke the animal, finally crushing its windpipe with a mighty tug in a moment of passion.

The Blackwater guys who guard the compound sprang into action and had the animal dressed and ready to barbeque in 45 minutes. One of the guys suggested Poppy and Babs hook up with the sex slave trader Cheney set up with the carnal entertainments contract for Iraqi occupation forces and mercenary troops. By the afternoon, they were looking over catalogs by the pool on their laptops.

Babs clearly enjoyed the process. “The bear was getting old and, hey, Igor may teach me about having an orgasm yet. Poppy’s always been useless in that regard and forced me to swim out to troop ships, just to sire our fuckwitted sons.”

Poppy, beamed at his good fortune, bouncing Albena in his lap. “She is as twisted as I am and what can I say about the convenience? Sent the guy an email and they arrived at our local airfield in an unmarked plane in three days. Hey, would you be interested in a great deal on some surplus nukes that just became available at killer prices?”

Jeepers, Poppy doesn’t have any taste even when it comes to lap candy, although to his credit the chippy appears to have had absolutely no work done and is modeling a suit from the 70s. Babs on the other hand seems to be making up for lost time.

Aaaah, the sex slaves from the Reagan-Bush days are all growed up!

I don’t know if the guy with Babs is gay, but I figure after rolling around with her, he would be.

BTW, I’m getting these ads for RSVP vacations showing a bunch of really cut men hanging out in Alaska. Are they trying to tell me something?

@ManchuCandidate: One would only hope. Or at least I would.

@ManchuCandidate: I see and ad for microfinance … WTF?

@ManchuCandidate: @blogenfreude: I have one for some sort of social networking site based around LOTR elf-like avatars.

t/j hey !!! just got word there’s a humongus gay pride hoo ha going on all next weekend in tel aviv! this far flung commenter will capture it for a jam!

excitingly true: a guy i worked with years ago went to israel for a vacation and never came back!! he said the Hottest men he’s ever seen!
so girls and gheys, man candy pics forthcoming!
(and get the visual of babs and poppy having sex out of our heads. ewww)

Poppy doesn’t have any taste even when it comes to lap candy.

Come on, Nabisco. This is Maine we are talking about here. Small sample size.

baked: You mean to suggest that The Powers That Be in Tel Aviv haven’t spiked the gathering? This is news.

@ManchuCandidate: Er, you be the judge. I’m leaning toward an emphatic “yes.”

@mellbell: I just can’t get past the socks and shoes. Not sure what that says about me.

@baked: More IDF girls (on the beach, at the club, off duty, etc . . .), and bonus IDF musical group videos today.

I’m guessing that the young man with Babs is after a career in the business of show. Being fluent in the Meisner technique myself I would consider some private coaching. He looks like he should respond well to the repetition exercise.

@homo limeyensis: Without troubling myself to confirm, I think they’re all from A Chorus Line. No, really.

@nojo: I think they’re all from A Chorus Line. No, really. Ah, so her swimsuit is from an original cast member?

@redmanlaw:
oooh reds, wait til lefty sees this! i’ve been snapping shots of beautiful IDF girls just for her and her lesbian fantasy, and i think i caught the gay!
ok, the bi.

@mellbell: @Mistress Cynica:
the socks are ok, i could do without the underpants though.

Oh my god, how can a person not want to lick that all over? Seriously…

@baked: Seriously. Which modeling agencies do they recruit from?

@mellbell: Like Cynica, I’m distracted by the socks. And if you’re going to wax your entire upper body, why leave the legs so hairy? Can’t decide if you’re a bear or bare?

BTW, who is this guy and what is the context of the photos? No hay una linque.

@baked: Why are Israeli men and women so beautiful? Damn!

Ugh. I can’t stand the sight of that miniscule-dicked greedy douchenozzle and his fucking shrew of a wife. Just think of the pain, suffering, loss of life, and devastation of dreams that the combination of his satan sperm and her goddamn nightmare chamber of a womb have and will continue to cause.

@Tommmcatt doesn’t mind if he doesn’t make the scene: Hello Handsome! To answer your question from an earlier post, I came around last Sunday and hung around in the back of the class, shooting spit balls with JNOV, cause we hadn’t read the assignment. Aside from that, studying for the LSAT (which I took Monday) and working 3 part-time jobs I’ve cobbled together after getting laid off in January. Good times. Good times. But I’ve been keeping tabs on you Stinquers! And, now finally I have some time to chat.

@cassandra_said: Glad you’re back! We missed you.