Stinque
Home Latest Comments Log in
If it smells, we’re on it.
Stinque
Cassandra was right.
Aftermath, Sean Hannity's America 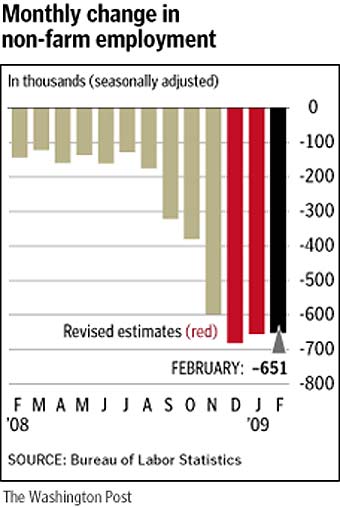 Some 12.5 million Americans are enjoying the fruits of the Bush II Administration’s wanton looting of their country, staggering into a black dawn of countless years, possibly generations, of total economic catastrophe and, doubtless, cannibal anarchy, the Bureau of Labor Statistics reported this week.

Bush- and Cheney-aligned organized crime enterprises are no doubt developing strategies to cash in on the ensuing calamities, providing support services to US military deployed to put down pandemic urban insurrection, riot and civil war, as vast swaths of American society become unmoored, barbarized by starvation, disease and the despair of hopeless existence amidst smoldering, blood-soaked ruins and rotting carrion.

The BLS latest statistics show that the states lost another 651,000 jobs and the official jobless rate now stands at 8.1%, meaning it is closer to 16%. By this time next year, it will be closer to 80%, by which time the BLS may not be reporting any more since the federal government may well be controlled by a religious junta of Pentagon executive officers who would have made good on threats eminating from the US military to take out the Obama Administration.

In a brighter note, however, if the dollar is completely devalued, the Bush/Cheney criminal syndicates at lease won’t clean up on the aftermath.

Jesus. Basically, I sell DVDs for a living. Who will buy them?

@Put a Tommmcatt in your tank!: Chinese citizens. Duh.

@IanJ: They only buy one DVD and sell the copies on the domestic market….

[TJ] It’s getting Biblical in Victoria. Now that the aboronist punishing fires have eased off, now they’re getting earthquakes.

@Put a Tommmcatt in your tank!: Put back those Naughty Frames your bosses have been clipping out over the years.

@CheapBoy:
When does Mark “Jacko” Jackson come out in beard and carrying a staff screaming “Oi!! Goodday. Let me people go, mate!”

For those who don’t know Jacko was the guy from the late 80s Energizer commercials. The big blond spikey haired fellow with the crazy expression on his face.

@CheapBoy: Gosh, been exchanging emails with a colleague in Ballarat and, at one point, they were just waiting for the call to evacuate ahead of the flames. Incredible. Looking at my old street in Melbourne today on Google maps’ Street View. Someone finally painted the house. Where was the earth quake?

@ManchuCandidate: OMFSM, you guys got that ad?

I would like to apologise on behalf of all Australians to the world that he got international exposure. Part of the horror can be found here

We don’t breed our sports folk all that bright down here.

@FlyingChainSaw: South Gipplsand was the epicentre of the quake. But was felt across a large area. Into the the outer Eastern Suburbs of Melbourne.

Only a 3 on the Richter scale, something Kalifornians wouldn’t notice, or pass of as a touch of gas.

@CheapBoy:
Yes. Yes we did.

Don’t worry. I don’t think anyone anywhere breeds their sport folks all that right period.

Re the BLS chart at the head of this thread: let’s not forget what happened to Weimar Germany. Hitler got elected, y’know.

@ManchuCandidate: I thought he was “Jocko,” the dude who said “Oi.” I loved him.

@CheapBoy: Holy shit, was that a CD player in that ad, that giant thing?

@Prommie:
Known as Jocko to us through Energizer, but actually known as Jacko among Aussies (especially Aussie Rules Football.)

Marinade for only about 2 hours or the meat may toughen up again.

@FlyingChainSaw: Fucking DeMint is helping by predicting bailout riots. Pigfuckers, inbreeders, and snakehandlers, they are.

@CheapBoy: Any juice will help. Key is to pound it down with a kitchen hammer or the backside of a knife for a while and then drop it into juice for a day. You can do wonderful things with stuff like shank beef if you’re willing to put your back into it. Good skill to have in hand when all that’s left to eat is the fallen.

@FlyingChainSaw: I know one is meant to be careful about fish and citrus juice because the acid will begin to cook the flesh and ruin it.

I thought it may have been similar with the kiwi fruit white wine mixture. But for something that tastes like pork, I’d be looking to orange juice. Anti-Gay Florida orange juice works best on wingnuts I hear.

@CheapBoy:
What my mom tells me that works well on really tough meat is Rice Wine. Soak it for 24-48 hours.

@CheapBoy: Ick. Prommie will probably disagree, but ceviche is, to my mind, disgusting.

@ManchuCandidate: That and any vinegars. As CheapBoy mentioned, it also can start cooking the meat. In another life, when time was less overwhelmed by obligations, I’d turn the cheapest London Broil into luscious grilling steak with a marinade with a lot of pineapple juice, OJ, vinegar and vinegar-based pepper sauce. When I’d pull it from the marinade to dry down before cooking, it’d be lightly cooked all around. . .

I guess one would have to cook the poor for a longer time on a lower heat, a casserole or stew perhaps.

The Rich would be like wagyu beef. Lots of fat, ideal for a short time on the grill.

RW radio talk show hosts could be minced and turned into sausages I suppose. No-one cares about what goes into a sausage. Well except Europeans.

@CheapBoy: Nah, the rich, with their strict diet and exercise regimens, are the stringy ones. The poor have gotten fat on cheap, nutrient-poor food like McDonald’s.

@Put a Tommmcatt in your tank!:

You’d better hope your future masters will be able to understand your Mandarin through your thick Kuleeforneeya accent.

Two words for tough meat: Pressure Cooker. One hour, and whatever you got, it will fall apart.

I like only conch ceviche. No other. It is reason enough to visit the Bahamas.

That’s “Cullehfurnuh” to you, bucko!

Upon reflection during times of cannibal anarchy, folks wont want to be sitting around too long waiting for the meat to tenderise. Quick cooking is the way to go.

@CheapBoy: Thats the advantage of the pressure cooker, does in an hour what would take 3 or 4 hours simmering.

@Prommie: I guess a Hobo Hangi is right out.

Unless you set the fire and go out huntin’ and gatherin’ whilst the meat cooks.

@CheapBoy: Woah. So, what makes you think there is going to be fuel for cooking?

But abandoned homes should be an abundant resource of firewood and kindling. Unless the buggers built their house with a steel fame.

@CheapBoy: Right, that and tires. There will always be plenty of old tires.

Taking a course on how to trap and dress wild tofu.

That and the novels of E.M. Forster.

@Benedick: Also, “How to Stuff a Wild Bikini.”

@redmanlaw: Like for sport or to help people who’ve hit so rock bottom they’re just grabbing guns and shooting at people’s pets for food? The latest figures have 31 million on food stamps.

@Put a Tommmcatt in your tank!: I hear Obama gave Gordon Brown a very nice set of DVDs. Of course, the ungrateful Brits are peeved, because Gordo gave Barry a pen made from the wood of the sister ship of the “Resolution”, from which the wood used to make the desk in the Oval Office came. This could all have been avoided if Michelle had hired me to be Letitia Baldridge to her Jackie O.

@Mistress Cynica: I’m still hoping that First Dogwalker/Poopscooper comes through for me. According to the People I bought last week, Michelle said the Portuguese Water Dog will be arriving at the White House sometime in April. Sasha interprets that to be April 1. The girls’ choices of names are either Frank or Moose. Unicorn and FLILF told them to come up with better names. Yes, I am awaiting the arrival of the First Furbaby with great excitement.

If he arrives April 1, they should totally call him “fool” or, hmmm… (googling) Bobo! Which is “Fool” in Portuguese!

So THAT was what the Reichtards were going on about. That is slightly lame.

It’s hard to be on the top of the food chain during the cannibal anarchy unless you can handle a rifle.

@redmanlaw: Pot hunting is going to be a growth industry, but I don’t need to tell you that hunting is hard if you didn’t grow up with it. The thought of a lot of these people matching wits with animals is kind of amusing. Quite a few people are going to take shortcuts, but even poaching is an acquired skill. I should check if the domain “Spotlight on Deer” is available.

Glad to hear the good hospital news. Best wishes to your nephew.

@fupduk: Hunting won’t mean shit. Come on. My state has a dear overpopulation problem. I live in fear I am going to die because a fucking dear waltzes in front of my car in the dark on one of the backcountry roads I commute on. Yeah, we have 100,000 dear in this state. I am way over-estimating. We have 8 million people.

The dear last a week. The muskrats last another week, some rabbits and squirrels survive to perpetuate their respective species, but not many.

In a month, ain’t nobody living off the land, everything that walks, trots, crawls, or creeps will have been killed.

Thats why the cannibalism is really unavoidable.

@SanFranLefty: Hey, I saw my mistake, and I couldn’t even care enough to correct it. I am so confident in my spelling and grammar proficiency, that I feel no need to demonstrate either.

@Put a Tommmcatt in your tank!: Or a Gatling gun if you’ve got a lot of people to feed.

@fupduk: very tangentially related to “people matching wits with animals”: Bonnie, a 32-year-old orangutan at the National Zoo in Washington, D.C., has begun whistling, says the March 13 issue of The Week. ” ‘She decided to do it on her own,’ says zookeeper Erin Stromberg, ‘Something made her want to whistle.’ Stromberg theorizes that Bonnie was mimicking zoo staffers who whistle while they work.”

@mellbell: Oooh, I missed this comment and haven’t read anything after it, but I love ceviche. But only the stuff you get served as a freebie with your beer under a palapa in a fishing village anywhere between Tahuexo, Guatemala and Cahuita, Costa Rica. If it comes out a proper kitchen and they want to charge $8 for it, meh.