Revenge of The Avengers

Argo, Django Unchained, Life of Pi, Lincoln, Zero Dark Thirty: Until they show up in Netflix, they’re dead to us. That also goes for Amour, Beasts of the Southern Wild, Les Misérables, and Silver Linings Playbook, since The Academy has seen fit to run nine Best Picture nominees this year. (Why not ten? Do you hate The Avengers that much?)

No matter: We just like the show. We especially like carping at the show. Which, with Seth MacFarlane hosting, should give us ample opportunity. So prepare your pity-party popcorn for our Oscars Open Thread/Multiple Cartoon Personality Disorder. Spoiler alert: You won’t remember any of them in two weeks anyway.

We’ve been questioning all weekend whether we really care this year — from a programming conflict with our favorite Zombie Soap Opera, to nominees we have no interest in, to Billy Fucking Crystal — but after taking our pulse and consulting our Deity, we decided that if we missed a Train Wreck Everybody’s Talking About, we could never forgive ourself. So the Oscar goes to our Academy Awards Open Thread for the Undead, if only because it’s being held in a theater named for a deceased photography company. 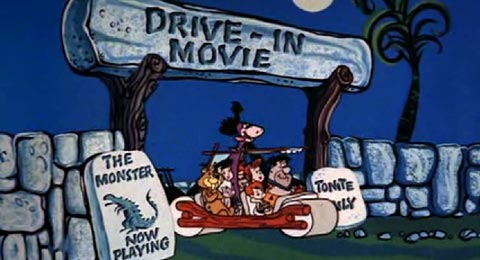 Yes, we’re going for the most obvious Oscar-broadcast joke imaginable, because if we don’t go there, Bruce Vilanch will. For that matter, he’d probably add a button about the Death Montage running long because of last-minute additions since the show began ages ago. Because Bruce Vilanch is a professional.

So let’s roll out the red — ummm, rockpet? — and have a gay old time at our Open Thread/Loyal Order of Water Buffalo Convention. Hey, everybody, let’s all give James Franco a warm hand!

Murder on the Oscar Express

Dear gawd, there are enough Best Picture nominees this year to fill an Agatha Christie novel, and nine of them are heading straight for the Death Montage. Instead of announcing the winner, could Christoph Waltz pick off the losers one by one? Because that would be cool.

But instead of the Grand Guignolian delights of a Tarantino-produced ceremony, we’re stuck with the one we have, so let’s raise the flaming curtain on our Open Thread/Twist Ending. If you’re not watching in 3-D, you’re not drinking enough.

Keep Those Speeches Short, Or Else

Speaking of naked hairy guys, we were watching the night of the Oscar Streaker, and we remember David Niven’s zinger: “Isn’t it fascinating to think that probably the only laugh that man will ever get in his life is by stripping off and showing his shortcomings!” Later we heard the whole thing was staged, but we refuse to believe it. This is Hollywood! Why would they sully their integrity?

We doubt tonight will offer such excitement, but we’re revving up our Open Thread/Party Tent anyway. The new producers and host Wolverine promise a streamlined show, but we offer this bit of friendly advice: Don’t fuck with the Death Montage. 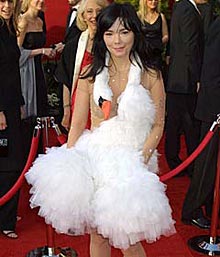 What we know about fashion you could stuff in that beak, but Dodgerblue’s wife would kill us if we didn’t set up a Red Carpet Open Thread, so here it is, to be quickly forgotten at 8:15 p.m. when our real Oscar coverage starts.

If you have cable or satellite, we think E!!!!!!!!!!!!! (damn shift key) is running the preshow, while ABC has a recap at 8 p.m. Someone holler if PETA stormtroopers show up as zany Nazis and threaten to blitzkrieg the Kodak Theatre.