Old People Tell Paul Ryan to Get Off Their Lawn…

“Paul Ryan drew boos speaking to the AARP by attacking ‘Obamacare’ and pledging to repeal it… Ryan was booed repeatedly as he continued to attack the bill, especially after he said the law ‘turned Medicare into a piggy bank for Obamacare.'” [TPM] 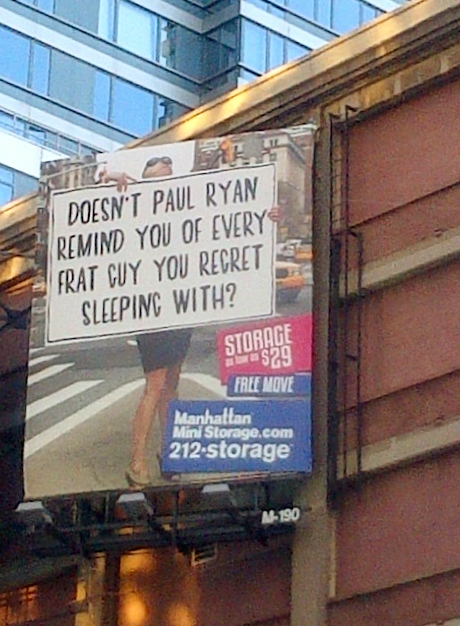 On Paul Ryan’s claimed sub-3:00 marathon: “Runner’s World has been unable to find any marathon results by Ryan. Requests for more information from Ryan’s Washington and Wisconsin offices, and from the Romney-Paul campaign, have so far gone unanswered.”

“The Obama foreign policy is to subjugate ourselves to the United Nations, which gives Russia and China a veto power at the Security Council. So we are giving these two countries you mentioned — these two powers who do not share our values — undue, needless unnecessary clout because we’re running everything through the Security Council.” [WaPo, via TPM]

Great! Now, Explain How Democrats Made You Trash Social Security

Our guest columnist explains how his awesome P90X workout not only leads to zero body fat, but extraordinary tap-dancing skills.

First of all, those [Medicare cuts] are in the baseline, [Obama] put those cuts in. Second of all, we voted to repeal Obamacare repeatedly, including those cuts. I voted that way before the budget, I voted that way after the budget. So when you repeal all of Obamacare what you end up doing is that repeals that as well. In our budget we’ve restored a lot of that. It gets a little wonky but it was already in the baseline. We would never have done it in the first place. We voted to repeal the whole bill. I just don’t think the president’s going to be able to get out of the fact that he took $716 billion from Medicare to pay for Obamacare.

Ryan On Medicare Cuts: “We Would Never Have Done It In The First Place” [BuzzFeed]

Let me apologize. I originally had a too-credulous item here linking to a piece at The Richmonder alleging that Paul Ryan has sold bank shares after a closed door meeting with Henry Paulson and Ben Bernanke on the financial crisis in 2008. As Eric Platt explains he certainly seems to have sold the shares on the same day as the meeting, but the meeting happened in the evening by which time the markets would have been closed. One can perhaps construct a scenario by which the Richmonder’s theory of the case holds up, but they don’t have the goods and I shouldn’t have passed their analysis on with no qualification and so little scrutiny of my own.

As Brad DeLong writes, for one reason or another Ryan did quite a lot of trading of individual bank stocks in 2008 so the timing of this particularly transaction isn’t particularly noteworthy when put in that context. For posterity’s sake the original item is below now in strikethrough.