Stinque
Home Latest Comments Log in
If it smells, we’re on it.
Stinque
America is a Death Cult.
Mittens
« later • earlier »
Mittens

You Know Your Campaign is Desperate When…

“At Ohio State University in Columbus, where Obama is set to speak around 1:25 p.m. ET on Saturday, Romney aides are planning to circle the candidate’s campaign bus.” [Yahoo]

Name One Show on The CW, Mitt…

“My guess is you’ll see a dramatic difference in the youth vote this time — part of it is you have a younger, more dynamic Republican candidate.” — Romney supporter Hank Brown, 72, touting the virtues of a 65-year-old candidate with sixteen grandchildren. [TPM]

“RNC members and state GOP chairmen were welcomed into the private reception [with Romney] only after signing a form pledging to support Romney as a delegate to the national convention in Tampa.” [CNN]

There Must Be a Third Option Somewhere…

“The dog loved it. He would see that crate and, you know, he would, like, go crazy because he was going with us on vacation. It was to me a kinder thing to bring him along than to leave him in the kennel for two weeks.” —Ann Romney, explaining the only two conceivable options for Seamus. [ABC] 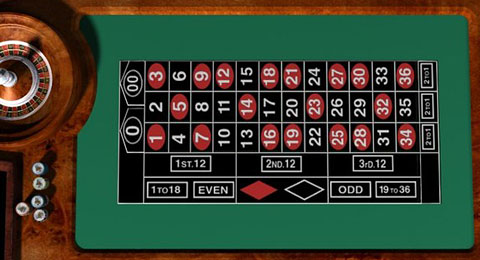 A handy rule of thumb this year should be that whenever Mitt Romney says something bold, he’s probably said the opposite just as boldly. So, since we’re not quite finished with Mommy Wars, let’s have a look at Mitt’s 2010 campaign bio, No Apology:

Welfare without work erodes the spirit and the sense of self-worth of the recipient. And it conditions the children of nonworking parents to an indolent and unproductive life. Hardworking parents raise hardworking kids; we should recognize that the opposite is also true. The influence of the work habits of our parents and other adults around us as we grow up has lasting impact.

Are we done with this yet? No? “Even if you have a child two years of age, you need to go to work. And people said, ‘Well that’s heartless,’ and I said ‘No, no, I’m willing to spend more giving daycare to allow those parents to go back to work. It’ll cost the state more providing that daycare, but I want the individuals to have the dignity of work.’” —Mitt Romney, January 4. [Boston Globe, via Political Wire]

In Related News, Michael Vick to Host Mittens Fundraiser in May 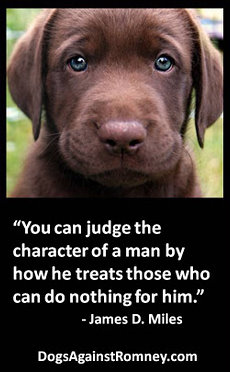 Well, not really, but I’m starting to wonder what’s up with Mittens and his fellow dog abusers.

From Dogs Against Romney:

On Monday, Romney will be the beneficiary of a fundraiser that is being hosted for him by Fred Malek. Who is Malek? He is the former President of Marriott Hotels and Northwest Airlines; former assistant to U.S. Presidents Richard Nixon and H.W. Bush; and former National Finance Committee Co-Chair for John McCain’s 2008 presidential campaign.

Fred Malek is also part of a group of men who were arrested after killing and barbecuing a dog in a city park in Peoria, IL in 1959.

Stinquers who are old enough to remember Watergate may also know Malek as the Nixon advisor who vowed to drive all the Jews out of the Labor Department.

But really, barbecuing a dog? What kind of sick twisted fuck would do that? Sadly, it is true. WARNING: The following may shock and horrify anyone who has a conscience or a shred of humanity.