Last weekend, the New York Times published a sympathetic profile of longtime Trump confidante and former presidential adviser Hope Hicks. We know it was sympathetic because it described Hicks’s anguish over a decision whether to testify about Trump to Congress.

The story called that decision an “existential question”.

Twitter had fun with that. Twitter also had fun with the fact that the existential question was whether to obey the law. Hicks wasn’t entertaining an invitation; she was deciding whether to comply with a subpoena.

The fashion-shoot portrait accompanying the story didn’t help, either.

END_OF_DOCUMENT_TOKEN_TO_BE_REPLACED

“Al Jazeera is putting the final touches on a deal to take over Current TV, the low-rated cable channel that was founded by Al Gore and his business partners seven years ago.” [NYT]

Get Up Right Now and Go to the Window

We finally figured out which switch you flip to control Shep Smith’s soul.

Your Honor, May I Enter Into the Record Exhibit A, My PR in the Form of a Lawsuit…

Keith Olbermann’s publicists lawyers drop the dime: “After being enticed to leave MSNBC and come to Current with promise of editorial control, freedom from corporate influence and the professional support to produce a high-caliber political commentary show of the type his viewers have come to expect, Keith Olbermann was disheartened to discover Al Gore, Joel Hyatt and the management of Current are no more than dilettantes portraying entertainment industry executives.” [TMZ, via TPM]

Hunter Walker on The Art of the Link-Baiting Hit Piece

After his ouster from Current TV last Friday, Keith Olbermann spent much of the ensuing three days bickering with Twitter users who mocked his firing. Mr. Olbermann also got into an extended discussion with The Politicker about why he thinks Twitter feuds are worth his time and energy.

END_OF_DOCUMENT_TOKEN_TO_BE_REPLACED

What the White Whale Was to Ahab

Our guest tweeter is a former editor of former website Cynics Party, now writing for the New York Observer. We are skipping the responses, because it’s more fun this way.

END_OF_DOCUMENT_TOKEN_TO_BE_REPLACED 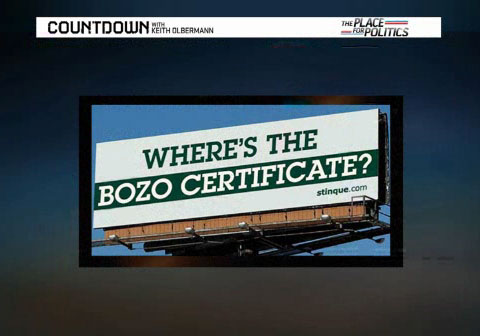 We lost track of Keef after he went to Current, mainly because we can’t get Current in Sandy Eggo, and last we checked, the podcast version only contained clips.

And, heck, we haven’t been above throwing spitballs at him on occasion.

But one of the highlights — if not the highlight — of our Accidental Blogging Career came the night Keith Olbermann featured our mock Christine O’Donnell billboard on MSNBC’s Countdown. And for that, we’ll always be grateful.

HILLRAT • The Unbearable Whiteness of Being Wow, this is the best and most coherent indictment of whiteness I've read in . . . . a while.