This book should be good:

An organizational flow chart at Fox would be tough to draw up, as title alone was not the ultimate signifier of status. Sometimes the anchors outranked their executive producers, as was the case with “The O’Reilly Factor.” (In fact, Bill had procured an EP title for himself, but he outranked the two other EPs on the show, both Stan, who oversaw TV, radio, and the website, and Gayle, who focused on television and also served as a fact-checker.) Sometimes the anchors were relatively weak — as was the case with a lot of weekend shows, and maybe some of the newswheel hours — and a strong senior producer or producer outranked, or at least pretended to outrank, the host.

In October, Fox News launched “Fox News Latino,” a site dedicated to attracting Latino readers. And within two months, they managed to find a way to insult their audience in an article about Spanish actress  Penélope Cruz’s announcement that she will have her baby in Los Angeles with an article entitled “Penélope Cruz and Javier Bardem Are Having an Anchor Baby.” 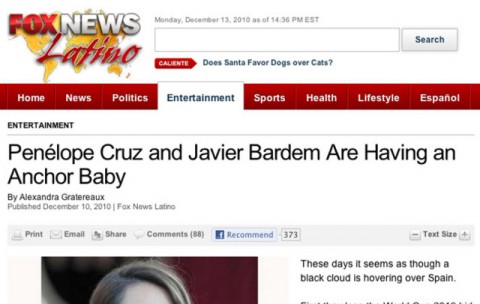 END_OF_DOCUMENT_TOKEN_TO_BE_REPLACED

Really, Jon Stewart’s writers could not have come up with something this deliciously obnoxious.

Shelley Oh was giving a speech today in western Pennsyltucky with Laura Bush at her side at a memorial service for 9/11’s Flight 93, and Faux News randomly cuts in the middle of the First Lady’s moving remarks for no other reason than apparently there was no Koran burning to air, so that some fat white man could point out that nine years ago her husband was a “nobody.”

UPDATE: If you don’t normally watch linked videos, I’m saying this in honor of PromNight: “For realz, I’m not making this shit up, click the linque.”

Big Mexican Women Interfering With the Fight Against the Taliban 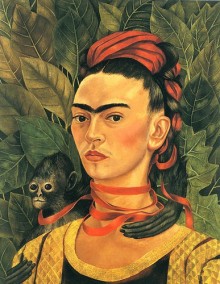 What’s better than fear-mongering about illegal immigrants from Mexico?

Why, it’s fear-mongering about illegal immigrants from Mexico harboring scary Mooslems from Afghanistan.

Don’t forget to throw in a dash of misogyny and ethnic stereotypes, too!

Presenting Fox News’ EXCLUSIVE story from San Antonio and their general asshattery of the day:

Yes, that is the headline. Surprisingly, there’s no mention as to whether the women are making tortillas or playing in a mariachi band while they’re at it.

END_OF_DOCUMENT_TOKEN_TO_BE_REPLACED

The highlight, however, was when Glenn Beck came out of the closet as a fashionista to criticize Michelle Obama’s sartorial choice when she recently toured a Florida beach, describing her outfit as “an outrage” and the “most Marie Antoinette ever” because there was a black pattern on her shirt.  Beck said that he felt her dress was mocking people who had been affected by the oil spill. (Note to Glenn: it’s an “outfit,” not a “dress”).  Then he closes out with a tirade about how the White House garden is socialist because there are too many red vegetables. (Note to Glenn: tomatoes are a fruit, not a vegetable).

If you can’t bear to watch the clip of asshattery, here’s Shelley Oh’s ensemble.

END_OF_DOCUMENT_TOKEN_TO_BE_REPLACED

Anything but the truth:

In Which I Play Nate Silver 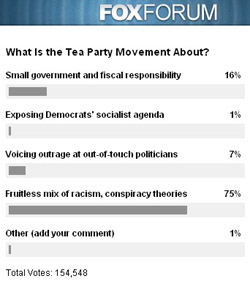 Meandering about the blogosphere the other day I ran across an amusing story detailing yet another example Fox News much vaunted propagandizing balance falling flat on face. It comes in the form of a poll published in the Fox Forum and reproduced to the left that gives some remarkably non-foxy results.

Now, it’s certainly amusing to see Fox publish a poll in which a full 75% of respondents characterize the Tea Party movement as a “fruitless mix of racism, conspiracy theories.” END_OF_DOCUMENT_TOKEN_TO_BE_REPLACED