Stinque
Home Latest Comments Log in
If it smells, we’re on it.
Stinque
Assholes, they do vex us.
Fox Fail

In Which I Play Nate Silver

Meandering about the blogosphere the other day I ran across an amusing story detailing yet another example Fox News much vaunted propagandizing balance falling flat on face. It comes in the form of a poll published in the Fox Forum and reproduced to the left that gives some remarkably non-foxy results.

Now, it’s certainly amusing to see Fox publish a poll in which a full 75% of respondents characterize the Tea Party movement as a “fruitless mix of racism, conspiracy theories.” It was, no doubt not the results that the creator of the poll was hoping for. Most likely, once the poll began yielding unexpected results it got picked up by the liberal blogs who then sent it waves of traffic, further skewing the results in a direction the poll creators were neither expecting nor hoping for. These sorts of things have a way of snowballing once they reach a certain critical mass, and currently there are over 155,000 responses to the poll –by my count more than three times the number of responses for the previous two polls. It bears mentioning, furthermore, that this is an unscientific, self-selecting, internet poll. So the results would have been dubious at best no matter how they came up.

That said, Fox News does have a storied history of FAIL when it comes to charts and basic math. The most notorious example of which I have taken the liberty to reproduce below: 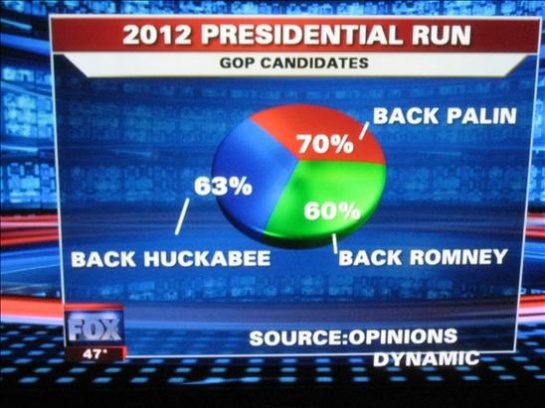 If you successfully completed 1st grade, you’ve probably realized that the percentages in the above poll add up to 193%.If you’ve gotten as far as 2nd grade then you know they should add up to 100% But if you were home schooled by parents seeking to shield you from Satanism in the form of the Theory of Evolution (as the Fox News intern who produced the above chart likely was) then you’re probably pretty comfortable with the results.

But the tragedy of Fox News’ epic stupid doesn’t end there. As I mulled over the amusing results of the first poll, I realized that the creators of the poll, in their propagandistic zeal and lack of basic math competence had drafted a poll that actually favored the sort of result they were hoping to avoid. How so, you ask? Let me explain:

One of the surest ways to guarantee a position a strong showing in a multiple-choice poll is to provide several subtly different alternatives for opponents of your position to chose from, while providing only one choice for proponents to pick. So, for instance, if I wanted to prove the superiority of hamburgers over pasta in a population of evenly divided hamburger lovers and pasta lovers, I would produce a poll such as this:

Now, assuming these pasta lovers all love different kinds of pasta, I can expect a poll result like this:

Though poll responses are evenly divided between pasta lovers and hamburger lovers, the way this poll was constructed, and especially the bar graph format, gives the false impression that the overwhelming majority of respondents are hamburger lovers. And this is exactly what Fox has done, crafting a poll that gives the president’s opponents three options to chose from, but supporters only one (we can pretty much disregard the meaningless 5th “other” option).

So why did editors who produced this poll for Fox News make such a basic mistake? I have a theory that goes beyond their appallingly obvious lack of basic math competence. My suspicion is that the producers of the graph are so blindly driven in their ideological partisanship that they can think of all sorts of reasons to hate President Obama and the Democrats and have a hard time narrowing it down. But when it comes to providing the opposite choice, they find the idea so distasteful that they can bring themselves to provide only one pro-Obama option, and that only to avoid producing a poll so ridiculously partisan in its framing that it makes a complete mockery of Fox’s disingenuous “fair and balanced” mantra. You can’t defend a poll that doesn’t give the opposition at least one voting option.

And what happens then, is that the few liberals who do hang around at Fox can more easily tilt the poll in their favor. Once this starts to happen the unexpected results get linked to by some high-volume liberal blogs and before you know it 75% of respondents think the movement you’re trying to promote is made up of racists and crazy conspiracy theorists.

Even in mocking it, the truth does come out.

man
talk about shooting the messenger:

On top of that, Andrew Young said Elizabeth Edwards has threatened to sue him for contributing to the downfall of their marriage.

and Jeralyn at talkleft says he denies proposing to the Navi.

Addressing the Tea Party, Sarah Palin wrote three notes on her hand: “Energy, Taxes, Lift American Spirits.” Why? She already had notes in front of her on the podium. Surely she could remember three simple themes. Why write notes on her hand?

Here’s my take on why: she knew that they would be visible when she gave the speech. And she knew that she would be made fun of — as so stupid that she needs to write notes on her hand. And that’s one of her most effective tactics — to be made fun of. It’s an integral part of her strategy of standing in for hardworking, Middle Americans, derided by the condescending, know-it-all liberal elites.

incredibly this is not FOX news but HuffPo. the comments are funny.

This makes sense if you discount all the evidence that Sarah is only smart when it comes to grifting for dough.

@ManchuCandidate:
you know the interesting thing about this is I stole the “secret genius” line from HotAir. who has been making fun of her for a while. her numbers continue to plummet in republican circles. I am starting to sadly realize they really might be smarter than democrats when I see “porgressives” on blogs like talkleft turning themselves into pretzels pumping her up and stuff like that shows up on HuffPo.

its a crazy world we live in.
the good news is she will never be president. or even vice president.

This HC “summit” doesn’t insult the public’s intelligence. Only the GOPers.

Delusion isn’t limited to one side of the political spectrum.

@ManchuCandidate:
well if its an assault on intelligence we know she is safe, right?

@Capt Howdy: I gotta say, I’m stunned at the number of people willing to crawl right over Occam’s Razor to declare Palin a sekrit geenyus.

I was so much happier before I’d ever heard of her. Then there was a brief honeymoon when I thought I knew her name but wasn’t entirely sure. Since then it’s been all downhill.

I don’t find the OMG she’s a genius! meme surprising. She is so spectacularly ill-equipped that it’s not hard to start thinking that she must have some secret agenda otherwise how could she have got so far? That her ostentatious lack of ability is a pretense to lull us. Trouble with this idea is that during the ‘Q&A’ of the ‘debate’ she can be seen quite clearly READING what’s written on her hand.

@Benedick:
Trouble with this idea is that during the ‘Q&A’ of the ‘debate’ she can be seen quite clearly READING what’s written on her hand.

silly, that is just make sure they notice her trap.

She is so spectacularly ill-equipped that it’s not hard to start thinking that she must have some secret agenda otherwise how could she have got so far?

I would say W with lipstick but he had his family name.

@karen marie:
there is a snail and marlon brando joke in there someplace.

@Capt Howdy: otherwise how could she have got so far?
Isn’t it obvious? Deal with Satan. No other rational explanation.

@Mistress Cynica:
saw the thing about McQueen. I am not the person who can never understand suicide under any circumstances. I can imagine doing it at the right time. a final act of controll.
but him? at 40? with a big show today?
hard to understand.

@Capt Howdy: She is W with lipstick, she has the same cheerleader mentality, but he’d done somethting – hadn’t he?

@Mistress Cynica: I don’t know who that is.

@Benedick: We want to believe in the meritocracy – the idea that only the best and brightest rise to the top. I understand that; it keeps me up at night. (Not Palin, of course, just the utter lack of justice in the world.)

@TJ/ Jamie Sommers /TJ:
they have done a good job of making us believe that royalty and serfdom are things of the past havent they?
some of us anyway.

@Benedick:
well
I dont believe for a second that W would be doing anything more complicated than managing a Dennys is not for his last name.

@Capt Howdy: I’ve been close enough myself to understand. He’d just lost his mother last week, and his best friend Isabella Blow two years ago. He’d talked about it getting harder and harder to come up with new ideas. It’s hard to imagine the kind of pressure that being known as an “innovative genius” carries with it.

@Mistress Cynica:
some months ago my favorite uncle shot himself in the head. I grew up across the street from him and he was like second father to me. he was not the first person close to me, of even close to me in my family, who had taken their own life.
he did it because his wife, my favorite aunt, had died almost a year before. they had lived together for 58 years since she was 15 and he was 16 and had eleven children.
his was an unemotional act. he had lived a full and rich life not without some pretty unbelievable hardships. he tried living alone and discovered he really didnt like it. I understand what he did.
I have a hard time understanding what McQueen did but I am not condemning him or judging him.

Ribbit, is that the name, some blog called ribbit, apparently fucked with that poll, is what I heard.