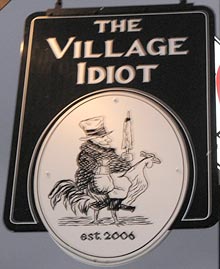 The snows that obliterated Washington in the past week interfered with many scheduled meetings, but they did not prevent the delivery of one important political message: Take Sarah Palin seriously…

Those who want to stop her will need more ammunition than deriding her habit of writing on her hand. The lady is good.

There is a growing sense that the former Alaska governor is not qualified to serve as president, with more than seven in 10 Americans now saying she is unqualified, up from 60 percent in a November survey. Even among Republicans, a majority now say Palin lacks the qualifications necessary for the White House.

Remember, Sarah Palin should be used for Entertainment Purposes Only.

If I had a pub, I’d call it “The Brown and Caddis,” in reference to the (German) brown trout and it’s fave summertime food, the caddis fly.

BTW, if anyone wants to plan a trip to Santa Fe this summer, late June through early August is prime time for fishing, especially with the dry fly. Opera, hiking, dining, target shooting and loafing in the hammock are also options. Stinquers w/kids can get dress rehearsal tix for the opera for four for the cost of a couple of cases of beer.

@JNOVjr: Are snowboarding hats with fake dreads racist? Son of RML and I had that discussion the other day up at the ski area.

I think perhaps its time to find a nice quite place for Broder. where he can be changed and rolled and cared for properly and people can make sure he puts his socks on BEFORE his shoes.

@redmanlaw: I think we can all agree that snowboarding hats with fake dreads are, at a minimum, fucking retarded.

@redmanlaw: I don’t think so. Locks have transcended race.

@redmanlaw: No more than getting dreadlocks in the first place, I don’t think. I always wanted one of those sea urchin snowboarding hats. I blame Johnny Tsunami. That movie was probably the only reason I ever had any interest in the sport in the first place.

ADD: Wizard Magazine (covering comics and sci-fi) has named Sideshow Bob as the 66th Greatest Villain of All Time. He has explained his “Die, Bart, Die” tattoo as being German for “The, Bart, The.”

@JNOV: But there’s nothing worse than a white boy with dreds. Unless it’s a white girl with dreds. Wearing patchouli.
@redmanlaw: I’m with Nojo. If nothing else, fucking retarded.

@SanFranLefty:
when I see white people with dreds I am always reminded of the things that used to form on my golden retrievers butt if I didnt brush him often enough.

@Capt Howdy: I think he’s already got that quiet place, writing editorials for the Washington Post.

@Capt Howdy: Alas, I could have included WaPo whippersnapper Chris Cillizza saying something similar this week. This isn’t limited to old farts.

pfft
an old fart in training.

@nojo:
but seriously
you would think “the dean” would read his own newpapers polls that say her “pitch perfect populism” (oh my fucking god) is causing her numbers to drop like LIEbermans facial folds before posting something like this.

aside from being asinine it is completely and demonstrably wrong.

@SanFranLefty: @Capt Howdy: Y’all racess. Honestly, I don’t think there’s anything wrong with white people having dreads. The problem is that some people just don’t have the hair for it. I don’t really have the hair for it either, but I have ’em anyway. This chick used to have the coolest dreadhawk, but I can’t find any pictures of it :/

@Capt Howdy: I won’t bother finding it, but Cillizza’s take was that Palin’s practice of run-on, run-on, bumper-sticker was genius, since it’s all about the soundbites.

In other words: As long as you don’t listen to Sarah Palin for more than five seconds, she’s a political force to be reckoned with.

@SanFranLefty:
but
will you think less of me if I tell you I wear patchouli from time to time?

@JNOVjr: The problem with white people with dreds is that at least the ones out my way seem to think that the only way to achieve the look is to not shower for two years and go to Burning Man. They don’t seem to understand that dreds require maintenance and management…

@nojo:
that sounds like something he would say alright.

@Capt Howdy: To elaborate, much like I find myself turning into the “Get off my lawn” old lady muttering “Tights are not pants” to women sporting the new (?) look this winter or muttering “Shower shoes are not meant for city streets” to the women wearing plastic chancletas while walking around Ess Eff, I find myself muttering “Patchouli does not substitute for showering” on a fairly regular basis (usually when I have to go to the Haight or the Mission).

@SanFranLefty:
well
its very expensive patchouli. it was about 6 or 7 bucks I think.

@SanFranLefty:
oh
on this we agree. patchouli and BO is not a good combination. I take a bath every week. if I need it or not.

@Capt Howdy: It’s wrong, and it’s not new — this is just the latest in a string of polls saying much the same thing.

And it’s not just “popularity”, which can change. It’s qualifications. If members of your own party don’t think you’re qualified to be President — that you’re beneath consideration, or fucking retarded, as they say — that’s a huge hurdle to overcome. Palin could have taken the advice to do some homework after the election, but she hates homework.

And so, back to my major theme: She’s not running. But she has to keep pretending that she might run, or she’ll lose all her marketable attention.

@SanFranLefty: Ah, that’s not so much a problem with the skin color/hair combo, then, as it is that some people are ridiculous douchebags.

@Capt Howdy: Reminds me of growing up on the rez when we had to pull our bath water out of the river (where we also got our drinking water) or the irrigation ditch, heat it either over the fire outside in a 55 gal drum or on the stove in two gallon buckets, and bathe once or twice a week in a round galvanized steel tub.

I remember one winter night when two of my brothers and I, all freshly bathed, laid on our bellies on the floor and watched this strange new show we’d heard about called “Monty Python’s Flying Circus.” We had electricity by then, but running water inside was still to come.

@JNOVjr:
I think that would be it exactly.

@redmanlaw:
wow
very few living people, at least living white people, can relate to that but I can.
I remember being so happy when I got into junior high school so I could shower there.

this is probably why I am now sort of a clean freak.

@Capt Howdy: He who lives it, knows it. I told Mrs. RML the other night that I’m an anti-poverty advocate in that I’m preventing myself from being poor again.

Oh, and I’ll have to get into having no car and using horse drawn wagons and farm machinery into the ’70s sometime.

Stinque Linque for a Drinque in LA tonight. You know who you are.

Which makes it the Chanel Number 5 of patchouli, really.

@Dodgerblue: I’d love to be there when youse all hammered and start singing Pink Floyd’s “Wish You Were Here” for the rest of us stinqueys.

@Capt Howdy: Yes. I never cared for the stuff anyway but now that I’ve developed a sensitivity to scents with my migraine problem, I get nauseous at the thought of patchouli.

@TJ/ Jamie Sommers /TJ:
I got hooked on it years ago when I had a jackass boss who hated it.
so I slathered it on.
now it like one of those keyed memories. every time I smell it I think of him cringing.

@TJ/ Jamie Sommers /TJ:
also there are two other people here who wear it.
when we pass in the hall there is a subtle inner nod.