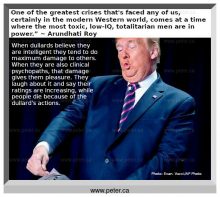 CNN reported today: “President Donald Trump admitted he knew weeks before the first confirmed US coronavirus death that the virus was dangerous, airborne, highly contagious and “more deadly than even your strenuous flus,” and that he repeatedly played it down publicly, according to legendary journalist Bob Woodward in his new book “Rage.”

“This is deadly stuff,” Trump apparently confessed knowing to Woodward on February 7 in a recorded interview, according to CNN.
In a series of interviews with Woodward, Trump revealed that he had a surprising level of detail about the threat of the virus earlier than previously known. “Pretty amazing,” Trump told Woodward, adding that the coronavirus was maybe five times “more deadly” than the flu, according to CNN..
Trump’s admissions are in stark contrast to his frequent public comments at the time insisting that the virus was “going to disappear” and “all work out fine,” CNN reported.

WHY Donald Trump MUST END HIS DAYS IN JAIL, SUBJECT TO THE MOST INHUMANE HUMILIATIONS THAT CAN BE IMAGINED FOR THIS SATANIC CUR

There is a term for gaterhing thousands of people together in auditoriums and taking down signs directing social distancing – all while you know that they’ll be exposed to a deadly infectious agent that will certainly kill many of them, in the most gruesome ways, and leave many disabled for life.

The term is depraved indifference murder.

Every lawyer in the United States should be representing everyone who lost someone to CV19 and attended any Trump rallies or programs like Sturgis that the president promoted.

Here’s the definition of the term depraved-heart murder – or depraved-indifference murder – from Wikipedia:

“In United States law, depraved-heart murder, also known as depraved-indifference murder, is a type of murder where an individual acts with a “depraved indifference” to human life and where such act results in a death, despite that individual not explicitly intending to kill. In a depraved-heart murder, defendants commit an act even though they know their act runs an unusually high risk of causing death or serious bodily harm to a person.

If the risk of death or bodily harm is great enough, ignoring it demonstrates a “depraved indifference” to human life and the resulting death is considered to have been committed with malice aforethought.[1][2] In some states, depraved-heart killings constitute second-degree murder,[3] while in others, the act would be charged with varying degrees of manslaughter[4] or third-degree murder.”

THE CRIME. THE PUNISHMENT. THE FUCKING MORAL TO THE STORY

Evert day that Donald Trump awakes in prison before an inmate takes him out like Father Geoghan, the SATANIC! CUR!’s face should be held up to the video camera in his cell so that AMERICA! can be reminded that THIS IS THE FACE OF YOUR BELOVED FUCKING REAGAN!

No day should end without this fact being repeated to a country that has been assaulted violently by FAKE! FUCKING! CONSERVATIVISM – whatever the fuck that term could mean – for FORTY! FUCKING! YEARS! The endless appeals to magic of marketplace, invisible hands, the virtue of a rapacious, diabolical financial crimes industry, the promotion of violent racism as AMERICA!n, all of it fucking pure, insensate evil that has somehow been distilled in one pathetic horror known as Donald! Trump!

Let’s not waste this moment in mere revenge.

“Tr666p is the first president to launch an October Surprise attack against himself.”

The SATANIC! CUR! Trump understands the depthless evil he animates on the face of the earth and knows why he must die a grim, humiliating death.

On this day, we celebrate the previous grotesquely incompetent, lying, dipshit RepubliKKKan preznit, CaliguBush, who proceeded to launch unfunded, trillion dollar illegal wars of aggression that killed a million innocent people, displaced tens of millions more, created ISIS and its offshoots, and wrecked the eCONomy for the next decade.

Now we’ve enjoyed 64 9/11s year to date, the eCONomy has collapsed into a pandemic-induced depression with no way out, we’re all effectively under house arrest, and we’re enjoying a racist dicktator terrorist attack from that abusive imbecile Prezinazi AntiChrist and his shitbag Despicables that worship him as their white trash Messiah.