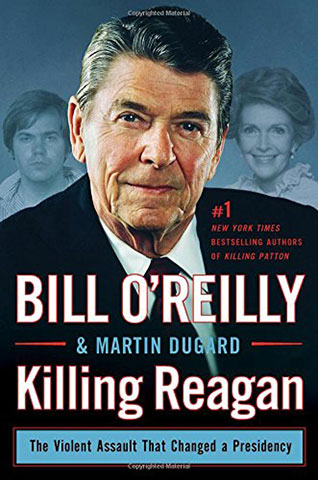 Title: “Killing Reagan: The Violent Assault That Changed a Presidency”

Blurb: “A page-turning epic account of the career of President Ronald Reagan that tells the vivid story of his rise to power — and the forces of evil that conspired to bring him down.”

Customers Also Bought: “The Time of Our Lives” by Peggy Noonan

Under America’s loose federal gun control law Hinckley could buy a handgun from any one of 160,000 dealers or pawnbrokers…

In a recent year in Canada there were 52 handgun murders. In England, Scotland, and Wales there were 55 handgun deaths. But in 1980 in the United States 10,728 Americans were shot and killed by handguns.

For almost 50 years polls have shown that the public wants tighter handgun control. But this view is not shared by all. A powerful one-issue lobby, the National Rifle Association, resists stricter gun control legislation in Congress. As Hinckley is tried here the public might examine the situation once more…

I have seen many reform efforts in the past sidetracked, thwarted, and forgotten — all save the diluted 1968 act following the Kennedy assassinaton. The courts are now putting a man on trial for a spectacular attempted handgun crime. But in a sense the nation itself is on trial — a nation which allows handguns to be bought and sold that kill 10,000 a year; a nation that does not force its parliament to obey its wishes.

@ManchuCandidate: The quaint part is that he’s merely talking about handguns.

All you need to know about that racist asshole is right here: https://en.wikipedia.org/wiki/Reagan%27s_Neshoba_County_Fair_%22states%27_rights%22_speech

I was going to post this anyway, because Pareene (as is his wont) has been killing it lately, but it’s particularly apt in light of the short-fingered vulgarian’s remarks yesterday:

[Marc] Thiessen is annoyed that John Kasich produced a video ad calling Donald Trump a fascist, merely because Trump is attempting to exploit the societal and economic unease felt by a nation’s ethnic majority and funnel their anger at various ethnic out-groups and imagined internal enemies.

You’ve really got to laugh to keep from crying at this point.

Trump’s made the Muslim and Mexican friend the new black friend.

Fascism has never really ‘arrived’ in US Amercia, but it was always there lurking in the background. Trump has merely shown up and exposed it in a very public manner making a bunch of people who spent a lot of time/effort/money trying to do the same thing in the shadows very very uncomfortable.

He’s no different than as the Gorgan from Star Trek. He’s leading a bunch of dimwitted adult-children into hell as he feeds off their anger and hatred.

“Fascism has never really arrived in US Amercia…”

I wonder if Trump’s campaign is the prequel to “The Man in the High Castle.”

@ManchuCandidate: All we need is a Dust Bowl, and…

Oops. Too close to call.

(Oh, and that damn Gorgon was nightmare-inducing, even the episode was plain silly. DEATH TO YOU ALL.)

@Serolf Divad: Are you watching TMITHC? How is it? I worked as an extra in the pilot, but then filming got bumped from Seattle to Vancouver over tax incentives. The crash of the loonie likely helped with the decision, too.

The fact that America’s ruling E-leets are so dangerously out of touch with reality that they can’t comprehend Trump’s popularity among rapidly imploding working class whites is what’s really scary. They know full well that the system is rigged and our eCONomy is now a predatory, psychopathic wealth transfer scheme, and that’s filled them with impotent rage.
Enter Trump, who’s simply doing what the 1% have done since this country’s founding: Redirecting white anger away from Plantation America’s masters and towards racial and sexual minorities, immigrants, the poor, and the dispossesed. It’s so obvious and so totally pathetic.
In order to solve a problem, one must first define and attempt to understand it. Since our political, business, and economic leaders have shown no interest in actually governing, and in fact proven that their only goal is wealth extraction at any cost, it’s clear now that this all will end in yet another self-induced national crisis.

@ManchuCandidate: Why don’t reporters ever ask for the names of these (totally imaginary) friends?

@¡Andrew!: Let’s just hope Canada’s hot PMILF will be there to greet us when we’re forced to flee to BC.

@ManchuCandidate: Sarah Palin had a gay friend once. She and her family ate him with some pinto beans and a box wine.

@Mistress Cynica: A colleague just returned from a week in Nelson, BC. Sweet FSM, it looks magnificent.

@¡Andrew!: I always ask the exact same question. I think Jorge Ramos of Univision is the only reporter with the cojones to ask so he could go interview Trump’s Mexican friend.

Attention architecture fans (this means you, Bloggy) and other houseaholics: Two mid-century masterpieces by E. Fay Jones are now on the market.

The Nance Residence was owned by the family of my best friend from high school. I spent countless afternoons there after school, and it totally changed the way that I view art and design and made me realize what a home could be. It’s my favorite work of architecture. My friend’s family moved on several years ago, so let’s just look past the decor of the current owners and enjoy the majestic geometry.

Also on offer is the equally impressive, neo-craftsman Clark Residence. So warm and inviting. Fay Jones was an absolute genius in human psychology and spatial relationships. This one was owned by one of my professors at the U of A, and it looks like she took great care of it.

@¡Andrew!: Awesome homes, except for the fact that they’re in Arkansas.

@SanFranLefty: They are majestic, and the prices just make me weep ’cause they seem so crazily inexpensive compared to Seattle. Those homes would cost ten times as much here. Can’t imagine moving back to Arkansas after 15 years on the Left Coast, though.