Last Sunday my Thanksgiving corned beef went into the brine: 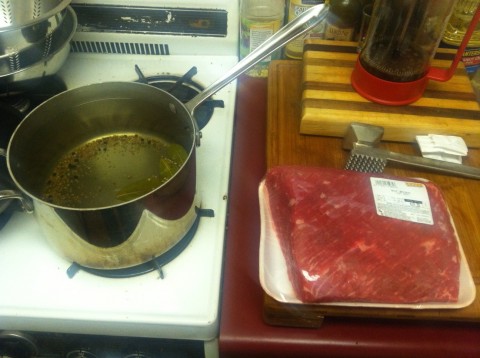 and today it came out: 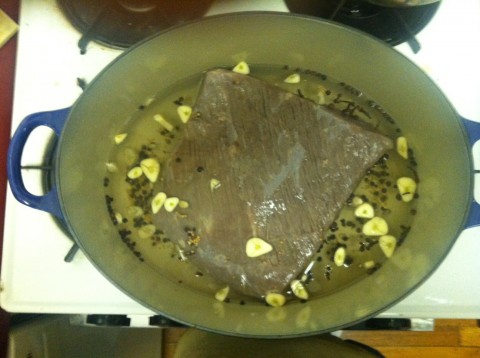 could have used another day or two, but I feel good about this. It’s not red like some corned beef because there’s no nitrates in the recipe. So you add the simmering spices and 4 sliced garlic cloves, bring it to a boil on the stove, then put it in the oven low and slow for 3-4 hours: 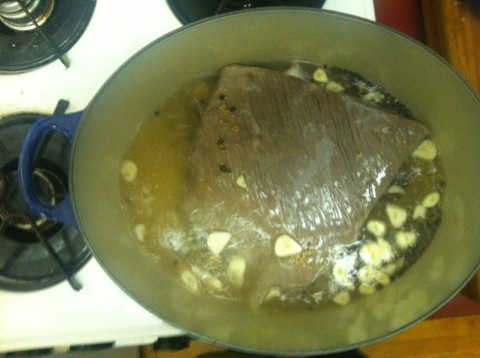 Boiled a few minutes, now into the oven at about 300 for 60 minutes, then I’ll check it. Here’s the full recipe. Stay tuned …

And this is the step I’m on: 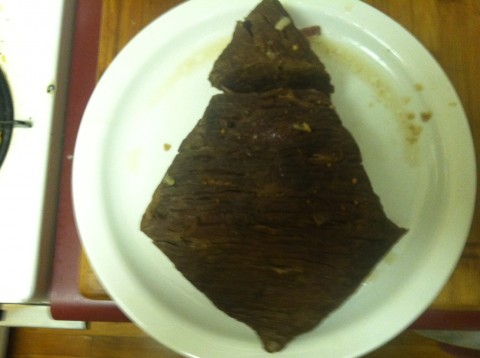 I was just wondering if you were going to post an update.

Meanwhile, is this real? Part of me wonders if her museum’s website was hacked – Alice Walton calls for Wal-Mart strike and denounces the company for opening on Thanksgiving:

Crystal Bridges Museum of American Art to Close on Black Friday; Statement from Alice Walton, Chair of The Board of Directors

BENTONVILLE, AR- The Crystal Bridges Museum of American Art will close on Friday, November 23, out of respect for the Walmart workers engaging in Black Friday strikes, walkouts, and pickets. Alice Walton, Chair of the Board of Directors, also asks all Americans to stay home with their family rather than shop on Thanksgiving, so that Walmart workers do not have to report to work in the middle their Thanksgiving meals on this national holiday. The Museum will reopen on Saturday, November 24.

As Ms. Walton explained, “Since Black Friday is the unofficial start of the Christmas season, and this is the season of giving, I and the staff of Crystal Bridges have decided to stand with the workers of Walmart, the source of my family’s fortune, in their Black Friday strikes, walkouts, and pickets. I recognize this may come as a surprise to both Walmart workers and the American public. I have always assumed these hard-working men and women were being treated well, paid well, and being compensated with proper health benefits and vacation time. On this holiday, I give thanks for the fortune I inherited and for all the workers who earned it for me. They deserve to share its benefits. I was shocked to the point of disbelief when I first learned of the working conditions these decent Americans endure at the company that bears our family’s name. As a Walton, I cannot stomach the thought of our employees working for poverty wages, without sufficient healthcare, on a permanent part-time basis, or under threat of harassment, retaliation, or termination for organizing in their workplace. The workers of Walmart deserve better.”

“However, Walmart’s hostile battle against its own workers and their attempts to organize their workplace, improve working conditions, and earn a living wage, is not the only reason to stay home on Thanksgiving and on Black Friday. In the race to profit from cash-strapped deal-seekers desperate to save a buck, Walmart is now asking its employees to report to work in the middle of the Thanksgiving holiday in order to open stores that evening. This poor treatment of workers and crass commercialization of the holiday stamps ‘Black Friday’ with a whole new meaning: the black mark of shame.”

“Let us all stand in solidarity with these decent working Americans. Let us respect their struggle and their strike and not shop at Walmart on Black Friday, let alone on Thanksgiving day. In fact, let us not shop anywhere this holiday. I wish the entire nation a Happy Thanksgiving and Merry Christmas.”

@SanFranLefty: LOL. Sure enough, she was hacked.

@SanFranLefty: I don’t know who that is. Yes, I am that clueless. Thank you for caring.

Blog. To be sliced against the grain, non?

I’d do a limey conjagute but I’m too fat to move right now.

@SanFranLefty: gonna cook this bitch for 4 or so hours, lowered to 250 hour 2, now in hour 3 … dunno about finished product, but the apartment smells great!

@Tommmcatt May Just Have Some MJ In His System As Well, So What?: Camilla?

BTW. Kudos on the gluttony.

@blogenfreude: We just had a turkey roti, French style from this awesome French butcher in Ess Eff. Deboned turkey rolled around a spicy sausage and tied up with a bacon wrap. House smelled like turkey and bacon for five hours.

Solution for this thing was to shred the remaining meat (about 1.5 lbs from a 2.3 start) then cook w/ a pound of ground beef, then turn it into chili. The brisket fell apart nicely – chopped it up and it made a dense chili that needed a bit of liquid …