Stinque
Home Latest Comments Log in
If it smells, we’re on it.
Stinque
Cassandra was right.
Teachable Moments 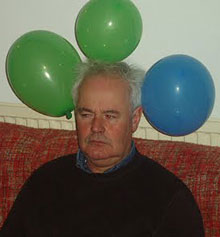 Our guest columnist has been phoning it in for twenty years.

Romney ends most rallies with his story of the Colorado scout troop that in 1986 had an American flag put in the space shuttle Challenger, saw the Challenger blow up as they watched on TV, and then found, through the persistence of their scoutmaster, that the flag had survived the explosion. It was returned to them by NASA officials. When Romney, afterward, was shown the flag, he touched it, and an electric jolt went up his arm. It’s a nice story. He doesn’t make its meaning fully clear. But maybe he means it as a metaphor for America: It can go through a terrible time, a catastrophe, as it has economically the past five years, and still emerge whole, intact, enduring.

Peggy seems to be hitting the sauce pretty hard. I think she should consider a refreshing rest at Betty Ford after the election.

@Mistress Cynica: Peggy@Betty would be a hiliarious post to write up, but it would take me a week to capture all the nuances.

Or is there already a faux Peggy Noonan’s Diary out there? What profound metaphor does she find in scrambled eggs for breakfast?

Why does Slobodan Milosevic have balloons stuck to his head, and was this before or after he landed at the Tribunal in the Hague?

I love Peggy. I imagine her alone in her ‘boudoir’ nursing a bottle of scotch, empty Ho-Ho wrappers scattered about, lipstick smeared, watching Maggie Smith camping about in Downton Abyss knowing that never, NEVER will she ever be announced in some Georgetown mansion as Lady Peggy Noonan. Or better yet, Peggy the Lady Noonan (yes that is correct address for some but don’t ask me to explain. Hons or Rt Hons. You got google. All I know is that the loathsome Una Troubridge insisted she be called Una, the Lady Troubridge). She’ll never be called Your Ladyship. Flunkies at the Kansas City Ramada will not drop curtsies while murmuring Yes ma’am. Even though she knew Ronald Regan. Sigh. If only Ingrid Bergman were still among is to bring Peggy to life in the movie: A Lady Among Barbarians.

And then poor dear lovely George Will. Don’t you love him? Don’t you admire his mind? And to think that his hair color is entirely natural! Claiming that Romster will win the EC with 321 votes. So insightful! The same number Beck found while inspecting his morning BM in the toilet.

Are we seeing the pundits staking out future gigs? Of course Romney can’t win, even the Irish know that, but there are lucrative spokesman/pundit/op ed writer/think tanqueriste spots up for grabs. Two weeks from now no one will be answering Romney’s calls. But one can’t be seen not to be a team player. If it hadn’t been for Sandy, and brown people, and fags… we could have had such a nice election.

As Peggy refills her glass, knowing that the sweet girl who does her plastering make up (Maybelline is such good value and you can pick it up in the grocery not so far from the liquor. So convenient!) will have to cope with the face tomorrow so she can sneer at that little faggot Stephanopolous. Oops. Ladies don’t say ‘faggot’. They say ‘single gentleman’. They also say ‘fiddle-de-dee’.

@nojo: I’m seeing her in Who’s Afraid of Virginia Woolfe opposite George Will. With C.E. Cupp as Honey and Andrew Sullivan as the jock.

MITT ROMNEY FLAG STORY IS A LIE! THE FLAG WAS AT ROMNEY CHURCH IN 2002 DURING THE SALT LAKE CITY OLYMPICS! (displayed next to foot found in blue sock on Florida beach.)

@Beggars Biscuit: At first glance I thought it was Newt.

But who’s the Dead Kid? Breitbart?

@Benedick: The new Upstairs, Downstairs is a poor relation to Downtown Abyss (good name for a bar, no?) right down to stealing some plot elements, but that doesn’t keep my lovely wife from watching it.

Speaking of TV from over the pond, does anyone know how I can get the Wallander ringtone on my goddam Blackberry?

The interview didn’t go as well I hoped. I wasn’t happy with a couple of my answers, but not much I can do about that as the questions had no serious work related context for me to focus on. I gave it my “best” shot and I have another interview for another job tomorrow.

I didn’t think I did all that hot in my last interview and they called me back immediately so there’s that but I’m not counting on it.

@nojo: No no no… darling, no. I know all you gay fanboys are obsessed with B Davis’s oeuvre but no.

@Dodgerblue: I once acted with Jean Marsh. She’s like Jessica Chastain. Incompetent but blessed by luck. If your wife likes that crap ethos I can turn you on to many unknown novels written by women who knew their stuff. Instance: romantic novel set in Austen country: heroine goes into the garden and finds the trees covered in soot. Or: wife looks out over her domain as her husband returns from WWII. A heartbreaking account of the collapse of empire seen through the eyes of a woman walking up to the downs above her house. And her husband’s outrage that his wife must now cook his breakfast.

And then there is the great American woman novelist of the 20th cent: Christina Stead.

@Benedick: I know all you gay fanboys are obsessed with B Davis’s oeuvre

So was Elizabeth Taylor Martha.

@nojo: Elizabeth Taylor was her own idol the equal to B Davis. She’s the only good perf in that ridiculous movie of that overrated play.

Meanwhile, Nate’s going all-in with 92% odds for Barry. Half of America is feasting on schadenfreude Wednesday.

@nojo: Ooo. Is that why I feel so relaxed? I thought it was because of all this talk of Paris. Which I don’t understand. What is this obsession? Why must I be tortured?

@Benedick: Thanks, I will pass along Christina Stead, and anyone else you may care to mention, perhaps in the sandbox. She is a Jane Austen fan (I am not) and will happily watch any British literary telenovela that the good people of the BBC send over here. I must say that we both enjoyed Prime Suspect with the formidable Helen Mirren, and we like Inspector Lewis although it makes me wonder why anyone in Oxford is still alive given how many get bumped off in each episode, having somehow survived being murdered in the earlier Inspector Morse series.

@Dodgerblue: To be fair, that sounds somewhat more plausible than dozens of murders occurring in an otherwise sleepy town on Maine’s coast.

@ManchuCandidate: One of the best jobs I ever had I interviewed for when I was recovering, just barely, from some kind of flu. I was very slow-witted that day and spent the day between the end of the interview and the call inviting me to take the job endlessly rerunning the interview in my head and kicking myself incessantly for having muffed things. May you get good news tomorrow, and I don’t mean about the election down here in the land of Old Gory (although I pray for good news about that, too).

Good luck Manchu. Pray for the same for us today.

@lynnlightfoot: Absolutely. I’ve done some of my best auditions while hung over.

Good luck Manchu. The person they want is you, darling, exactly as you are, they just don’t know it yet.

Colonoscopy yesterday; voting and dentist this morning; then I spend the rest of the day in terror lest the Republicans really do manage to steal this thing. Is this a great country or what?

@Dodgerblue: Foyle’s War with the admirable Michael Kitchen. If your wife is a fan of V Woolfe then she might really enjoy Molly Panter-Downes’s reply to Mrs Dalloway entitled One Fine Day. I think it’s superb. Echoing Woolfe’s novel, a woman walks about her domain at the end of a war, this time WWII, to see where her life is now and what has happened to her world. Extraordinary detail and emotion carried out through the most trivial-seeming incidents. The finale has the heroine walking to the top of the downs where she can look out over 5 counties. Gorgeous. I’ll do more in the sandbox, but that is a fave. Republished by Virago when that house was new and vigorous. I found so many wonderful novels under that imprint.

@Benedick: Thank you. I’ll pass these along tomorrow — she’s too nervous today to retain any new info, plus she’s already gotten the good tequila out for an election get-together we’re having tonight.