From The Jaws Of Victory…. 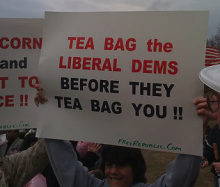 HOW WILL THE DEMOCRATS SCREW THIS UP?

I mean, really. This is the M.O. of the Party of Jefferson.  (Who really must want to come back from the dead whenever the words “Party of Jefferson” are spoken aloud.  When he isn’t seeking to haunt those running the University of Virginia into the ground, anyway.)  They’ll come around in September and say — “hey, look: we want to get things done, but those GOP meanies won’t let us. Because they’re MEAN.  Elect us, and we will work with them. Promise. Cross our hearts and hope to die; stick some needles in our eyes!”

Bipartisanship is dead. The Republicans killed it.  Anybody betting that Black Eagle and the Dems figure that out before Columbus Day?  Anyone?

I didn’t think so.

The comment box is open.  Tell me I’m wrong about this. Even though I’m not.

Posts go bang-bang crash. Where the hell is Nojo when we need him?

(Of course the answer to your question is “Sandy Eggo.” But never mind.)

P.S.: there were other decisions at SCOTUS too. Like Stolen Valor Act FAIL.

But also: the clock here (on Central War Time) read 2245 when I posted. Which is when I thought many Stinquers would not be drafting / posting stuff.

So: sorry. Again. (Apologies are my strong suit, you know. I’m more Canadian than those teabagging suckers that suddenly think that Canada is a great place to which to move their sorry asses.)

[Note: DRUNK CHICAGOBUREAU IS DRUNK. WITH FREEDOM. AND GLEE AT BITTER TEARS OF LOUIS GOHMERT. AND SECOND-RATE BEER THAT CUBS FANS DRINK. AND FREEDOM.]

Democrats are Charlie Brown, falling for it every time GOP Lucy pulls the football away at the last second. This year will be no different.

@Mistress Cynica: you watch the first debate. Black Eagle will be ducking and weaving like Ali in his prime. And, unlike the Champ, it will NOT look good.

@chicago bureau: I remember you told me to never forget that Black Eagle learned to play poker in Chicago. True dat.

@SanFranLefty: Where the hell is Nojo when we need him?

Yes, it’s summer again, which means I’m making yet another attempt to scale Mount iGadget. And this time — this time! — I’m going to geek the shit out of it.

How will the Dems screw this up? By adding a bunch of qualifiers to their support for the law, as Harry Reid did yesterday. Look to Nancy Pelosi for the way all Democrats should have responded to the SC ruling. Look to Reid for a timid joke of a politician who’s afraid so go out on a limb for anything.

The GOP has done a marvelous job of turning the Affordable Care Act into a partisan issue. Their constituents absolutely hate the law. But Democrats have not done the converse. The base should be singing the law’s praises and waving plackards that read “Tell Congress to keep its hands of my Obamacare!”

If you put a product on the market you’ve got to promise the consumer that it’s the best thing since sliced bread, even if, in reality it’s no better than a day old, half eaten bagel. Perception matters, and the Dems just don’t seem to get that.

Well now, hang on. I vote for a party that has actually done something. Our president (sigh!) is rapidly becoming the most brilliantly successful dreamboat head of state since… Johnson? In terms of things done that affect the citizens of the republic. Democrats have always argued and shambled about, that’s what they do, because the party is a coalition of politicians of varying shades of blue. It’s easy for Ms. Pelosi to be triumphalist given that she represents Gomorrah. Not so easy for Reid, but let’s not forget that he withstood enormous pressure when the ACA was being negotiated, from left and right, bringing it back from the dead more than once. And no, not everything about the ACA is peach schnapps but it’s a good beginning. It’s already saved us money and I’ll be getting a refund (yay!) to recompense me in some measure for the M$77 that CIGNA paid its departing CEO in recognition for his sterling work inflating the fucking fees doing something-or-other.

The GOP is a war machine made to win elections and rob us blind. That’s all they intend to do. Let’s not forget that when Mr. Clinton invited wifey to destroy the nation with their version of health care that Bill Kristol wrote a private memo warning the GOP caucus that it must be defeated at all cost because if it passed the people would like it. And if that happened it means Democratic majorities forever.

Whether he was right or wrong – and if he was right it might be the first and only time – that’s what they believed then and believe now. I thought Frothy Britches was correct when he said that Romney was the least believable Republican candidate to take on Obamacare for obvious reasons.

The Republicans want us to feel disenchanted, pox on both their houses-ish, because it helps them. So I’m all Go Team Barry! (And no, I don’t need to hear about drones, thanx for asking)

@chicago bureau: I hope you are wrong about the Obama/Rmoney debate. Since Rmoney has made the elimination of ACA his main and evidently only goal, Obama simply needs to counter with an opening statement congratulating Rmoney for being the father of ACA and thanking him for such even asking the crowd for a round of applause. Then as Rmoney stammers and stutters, Obama can ask the crowd, “Did I tell you about Bin Laden, you shoulda seen it live. It went something like this. knock, knock. allahu akbar, who’s there? Navy Seals motherfucker, boom, bam, boom!!”
Once the roar of the crowd subsides, Obama can look towards Rmoney and ask, “What were we talking about?” with a sly smirking grin.

I have to agree with Bene.

The GOPers reaction is more impotent fury than actual action. Instead of doing things concrete that would improve their “brand” they’ve gone more and more shrill.

The fact this passed into law was a miracle in itself.

Despite their confusing muddle, Dems actually do shit… GOPers smear it.

@jwmcsame:
I have to agree. Barry does his best in a battle of wits. Mittens is quite unarmed mostly because he doesn’t think on his feet well. All his “best” lines are when he’s all alone on the podium with a bunch of fawning typists recording it down.

When one gets bested by Newt fucking Gingrich AND Ricky Poo then one should be ashamed of themselves.

@Benedick: agree. i think that americans are going to like this first step in health insurance (not care, that cannot be stressed enough) reform. Even the most important element of society as far as DC is concerned, Wall St., saw big gains in health insurance and care companies stocks yesterday. many will still be left without insurance, but one day the second and third steps will come and we will have single payer. Obama knew that a single leap from this useless and financially burdensome for profit health insurance system to universal health insurance could never happen in one administration due to an uneducated public hysterical over so called socialism and all that horseshit heaped on us by the Grandstanding Obstructionist Party. So, he had to move Americans slowly towards the goal of single payer, a movement others must continue and finish. Americans are generally slow and dumb, but this slight push should get the herd moving in the right direction. Now all we gotta do is stay on course.

@ManchuCandidate: no shit. Rmoney backed into the finals only because his opponents in his conference playoffs fumbled too many times and kept getting costly penalties, like the NYJets backing into the AFC finals back to back a couple of years ago with a foul mouthed idiot calling the plays from the sidelines.

Is ACA the Civil Rights Act of 1957 with More to Come later? Let’s hope so.

In the meantime, our bad ass Secretary of State needs to get this metal dude out of prison in Prague.

Lamb of God, Walk With Me in Hell

@nojo: Step away from the amphibians.