Fatal Confection at Large in the USA? 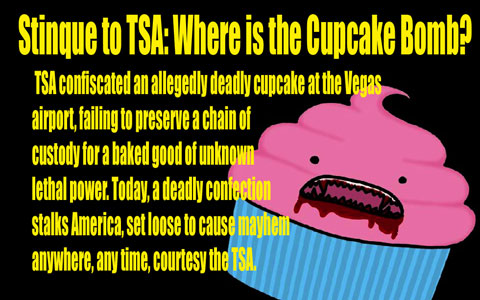 Criminally negligent TSA agents seized an alleged cupcake bomb from Massachusetts college lecturer Rebecca Hains on Christmas Eve at a Las Vegas airport and, as of last night, no one at the agency has been able to produce a record of the disposition of the purportedly fatal confection.

No one knows if the alleged cupcake bomb was taken to a remote location and detonated, if it was tested for explosives or if it was possibly mislaid and intercepted by persons unknown with no appreciation of the destructive potential of this alleged ordnance.

In short, a confection of mass destruction, of virtually unlimited destructive power is now at large in the USA, whereabouts unknown, courtesy the drooling incompetence of the fuckwits at the TSA.

Stinque recommends everyone call the Department of Homeland Security and demand that Janet “Big Nurse” Napolitano launch a strike force to locate this menace to life and limb.

Where is the alleged cupcake bomb?

Is there a chain of custody SOP for alleged explosives confiscated at US airports?

Has it been observed for the alleged cupcake bomb?

If so, can we see it? If not, why hasn’t the SOP been observed, if TSA has one for cupcake bombs?

Why are alleged cupcake bombs disappearing without a chain of custody indicating the disposal of the alleged explosive?

Isn’t there an SOP to prevent alleged cupcake bombers from getting on a place with a back-up device, like a Fudgicle nuke or a Butter Finger bar stuffed with C4 shoved up his or her butt?

Woe to the agent who unknowingly ate the bomb while it sat in the TSA break room for “safekeeping.”

That cupcake’s a bomb all right. A Diabeetus 2 bomb.

A single muffin ‘o terror can ruin your whole day.

Is this related to the Twinkies bankruptcy?

i caught two kids fixin’ to blow up the theater/bar where i once worked outside with a fake doobie bomb before a showing of spaceballs. they were just about to light the fuse when i saved the day. i took it up to the booth and properly dismantled it. i got those kinda skills.

And if it’s a “cupcake in a jar,” it’s gotta be some kind of Mooslim cuisine, amIrite?

@matador1015: I checked Urban Dictionary and couldn’t find any other definition.