Stinque
Home Latest Comments Log in
If it smells, we’re on it.
Stinque
This is America.
America's Heartlessland, Music Nerding

The Most Uplifting Thing I Read All Week

This has been a pretty shitty week for those of us who were horrified by the debt ceiling drama, and who think about things like the future of the country.

And then we have freak shows like this revival in Houston… 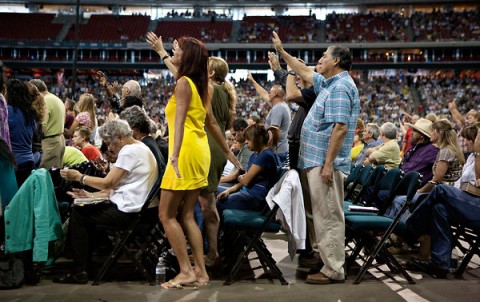 …or repulsive levels of child poverty in America.

But then I read something that just made my fucking day, and so I want to share it with my fellow Stinquers.  The source? None other than Dolly Parton, but it doesn’t involve lesbians at the amusement park.

Because let’s talk about someone who has done more to help poor children than any teabagger member of Congress:

In 1996, Parton started Imagination Library in her home county in east Tennessee, delivering a book every month to children age 5 and younger. Today, it’s reached 1,300 communities in three countries and given away nearly 40 million books. The first book that a child receives is “The Little Engine That Could,” because it’s Parton’s favorite and captures the spirit of her rags-to-riches rise.

I love that woman. Here’s a kind of cheesy video (but that voice, sweet 8 pound 9 ounce Baby Jesus, that voice!) of her performing Collective Soul’s song Shine, off of a terrific 2002 2001 album of hers called Halos & Horns Little Sparrow.

Thanks, SFL! Uplifting and heartwarming, two qualities we could sure use.

Re: Perry and the God-botherers – I think I’ve identified the problem. Clearly, Gov. Perry and the rest of his gang of loons have simply got Bibles that are missing a couple chapters – particularly Matthew 6.

Heh – that’d be an interesting means of symbolic protest; imagine tens of thousands of copies of that chapter turning up in the mail at the Governor’s office…

@al2o3cr: Huh. You made me go look it up. You know your Bible. I think Matthew 6:5-7 is quite appropriate for Gov. Good Hair’s Houston Säuberung.

TJ/ Hey — where’s Benedick HRH KFC FML SMH? I’m watching The Tudors, and that Bend it Like Beckham dude just jacked off with his man servants attending — holding a box and a towel or some such. I’m like, WTF is THAT? I’m guessing it comes (sorry) from some sort of Onanish No Spilling! rule, but WTF? That was odd. I want ALL THE JEWELRY in this show, BTW. I’m really digging the pearls, and I hated pearls. The tiarish things aren’t bad, either. I need to go get me some.

Haven’t I said that women don’t wear tiaras anything like often enough?

@al2o3cr: Matthew is particularly apposite. Isn’t it in Matthew that Himself says several times that His mission is to temper the harshness of the Mosaic law with love? He can’t come out and say it without the cops busting the crowd so He tells the discliples to listen to what He says: what He talks about is important; what He doesn’t isn’t. In that way He informed the crowd without everyone getting hauled off to jail. That bit of Matthew?

@SanFranLefty: That’s very touching. And what a great thing to know about her, that she has done so much for kids. I have to say (uh oh) when she starts I shrink slightly from the style but she’s very truthful when she sings. She’s very true to the style but it has more vibrato in it than straight-on singing: there’s a sob in the voice – think Patsy Cline – that isn’t respectable unless you’re Edith Piaf. Of whom she reminds me. Broadway singing is flat on the note, lots of chest, very little vibrato: classical singing is more in the head with more life in the breath but the vibrato is tightly controlled or it falls into a wobbly sound, you’re not quite sure the singer knows what the note’s supposed to be. There’s a slight bleat to her voice but it’s engaging. I’d love to hear her singing live. Well, I did once but that was a long time ago.

I’m very surprised no one has thought to make a musical from her music and her life story. I loved the music in the one country musical I ever did. The band was as good as her band in the video and it really cooked. In fact I cannot think of one musical that uses a real country vernacular. Isn’t that strange? We had Dreamgirls (be still my heart. Well, if you didn’t see it on stage you never saw it) for R&B why not country?

One of the best things I ever saw was a musical that came from South Africa called Seraphina. It was crazy good, using vernacular music from the townships. Why couldn’t the same be done about Tennessee? Is it praps because we don’t take our own culture seriously? Or we don’t care what poor people do?

Big River. aka Fuckleberry Hunn. But that was more Hootenanny than Loveless Motel (a real place near Nashville. I got severely stoned in it once and made everyone eat chess pie).

@Benedick HRH KFC: That part of Mathew 6 that says not to pray in public or in the synagogues as the hypocrites do, just a verse before the lord’s prayer. I love the proximity of those two verses and the obvious selective reading.

@Benedick HRH KFC: OMG, I loved Seraphina. And yes, I’ll be the first to say that Dolly has a quiver in the throat (I can’t use the technical descriptions professionals like you use). But all I know is she makes all of the hair on the back of my neck and my legs stand up straight, and tears start springing out of the corner of my eyes for no particular reason when she reaches a certain pitch that is only detectable by dogs.

And why the fuck nobody has written a musical yet, well, I think you need to hop to it. What a mine of drama to choose from.

O Brother Where Art Thou would make a pretty good traditional country musical.

@Walking Still: Just a little spooked you mentioned that album, because it’s disc #4 after a couple Dolly albums and a Lyle album for the SFL household Saturday night listening pleasure.

And can I get a Hell-Yeah for Emmylou Harris? Who, besides being the hottest female to ever walk the earth with a head of gorgeous white hair, (besides Stinque’s own Mistress Cynica who rivals Emmylou in fabulosity and gorgeousness) has a voice that would make angels sing back up on Wrecking Ball?

@Walking Still: I thought that movie was … incomprehensible. And very patronizing in its attitude to the poor. I say that as the most patronizing person I know. I’m thinking more Jude the Obscure.

@SanFranLefty: But I’m glad to have heard it and I thank you.

Alla you stinques who were country cowphreaks in the 70s know this one:

@SanFranLefty: Emmylou is quite glorious – Wrecking Ball is my favorite of hers, as is Gillian Welch – a major force in the music of O Brother. I highly recommend her new album – The Harrow & The Harvest

@Benedick HRH KFC: I found the movie pretty easy to follow – just retelling the Odyssey as a comedy in the Depression South. The movie uses picaresque structure and conventions, rather than a heroic quest. The narrative only really holds together thematically, rather than as a structured plot – but the same could be said about most picaresques.

As to tone, the movie didn’t spare the foibles of any part of the society it depicted. I didn’t see it as particularly picking on the poor, but most of the people in the movie were poor, so I can see where your view comes from, though I don’t share it. That said, tone is really hard to get right in comedy.

@Benedick HRH KFC: That’s cuz you’re not bonafried. I think I need the soundtrack. I like O Death.

@Walking Still: @Walking Still: I just didn’t get it. Maybe I should see it again. It seemed so damn cutesy-poo. I’m perfectly willing to believe it’s my fault.

K. I just tracked down the song I heard her sing with Porter Waggoner in Nashville in the late 60s. It was carefully hidden on youtube. That was sort of how she looked then except she was wearing gingham. I’m interested that they cut the central part of the song and have him do a saccharine narrative to replace a couple of choruses. I remember in the song the parents went out drinking and to punish them God burned down the house and killed the child. I thought at the time it was a deeply creepy song and still do.

But you might see how a carefully brought up immigrant boy who’d hardly been out of New York might be frightened out of his wits by these people.

Hey, I’m back from the Sierras. Did I miss anything?

@Dodgerblue: You came back? Brave.

@Tommmcatt Be Fat, And That Be That: Yeah. He was around for the last one, right?

@Benedick HRH KFC: A big part of the reason that comedy is hard is that tone (and audience reaction to tone) is so individual – what works for one doesn’t work for another. This freedom of perspective offers some great liberties to a good piece of comedy, but it ain’t gonna work for everyone. Surprisingly, not everyone loves Blazing Saddles.

In contrast, drama has, to overgeneralize, a lot of commonly shared conventions. This doesn’t mean that good drama is easy. But the conventions of drama make it easier, I think, for a good drama to have broader appeal.

It may well be simply that this one grated on you, while it didn’t on me. However, if you decide to give O Brother another chance, it may help going in to know that George Clooney’s character is a highly unreliable lead – and I hope you’ll be able to appreciate the music.

@JNOV: The soundtrack is special as is Down From the Mountain, the live CD that they put together of the touring musicians from the movie. Didn’t Leave Nobody But The Baby by Emmylou, Gillian and Allison Krause is my favorite on the soundtrack, but O Death is a good time too.

@Dodgerblue: Not much. Noje has got a new boyfriend. His name’s Trevor.

@JNOV: I particularly enjoy the Germanic ones.